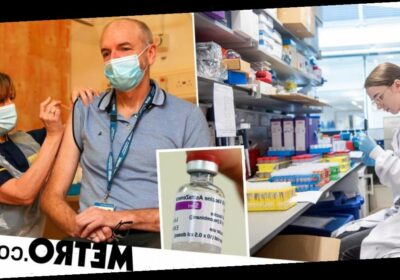 Scientists have blasted a suggestion that the AstraZeneca-Oxford Covid vaccine is only 8% effective in the over-65s.

The ‘completely incorrect’ figure was reported in the German media, which claimed unnamed Government sources had ‘confirmed’ the news.

However, the German Health Ministry later said the 8% figure actually refers to the number of people in an AstraZeneca study aged between 56 and 69.

Journalists at Handelsblatt and Bild made a major error, Politico reports.

A phase 3 Lancet study published in December by AstraZeneca and Oxford University said older age groups had been recruited later into the study so ‘efficacy data in these cohorts are currently limited by the small number of cases, but additional data will be available in future analyses’.

Only 12% of people were aged over 55 in this particular analysis, although more data has been gathered since then.

Previous work published in November found all age groups, including the over 65s, had an immune response to the jab after two doses.

A spokesman for AstraZeneca has named German reports ‘completely incorrect’.

He said: ‘Reports that the AstraZeneca/Oxford vaccine efficacy is as low as 8% in adults over 65 years are completely incorrect.

‘In the UK, the JCVI (Joint Committee on Vaccination and Immunisation) supported use in this population and MHRA (Medicines and Healthcare products Regulatory Agency) included this group without dose adjustment in the authorisation for emergency supply.

‘In November, we published data in The Lancet demonstrating that older adults showed strong immune responses to the vaccine, with 100% of older adults generating spike-specific antibodies after the second dose.’

A statement today by the German health ministry, seen by the Financial Times, said: ‘At first glance it seems that the [newspaper] reports have mixed up two things: about eight per cent of those tested in the AstraZeneca efficacy study were between 56 and 69, only 3-4 per cent over 70 (MHRA Approval Public Assessment Report).’

Meanwhile, vaccine minister Nadhim Zahawi told Good Morning Britain, he can ‘reassure the over-65s in this country that that (8% efficacy) is not the case’.

He said: ‘We don’t know where this unsubstantiated report comes from, it’s not true. This 8% figure is completely nonsense.

‘So, I would absolutely rely on the JCVI of the United Kingdom and…one of the best regulators in the world the MHRA in terms of efficacy.’

For over-65s, the vaccine also produces ‘almost 100% protection from severe infection from the virus, so it’s an excellent vaccine, clearly one that the EU also wants to get sufficient supplies of’, he added.

It comes after the European Union threatened to block the export of coronavirus vaccine to Britain.

Brussels issued the warning amid a row with AstraZeneca over the pharmaceutical giant’s failure to deliver promised doses of its vaccine to the EU.