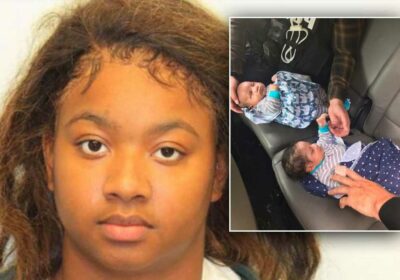 A woman in Georgia is accused of shooting a young mom — then fleeing with the victim’s newborn twins, authorities said.

Police issued an Amber Alert after she shot the boys’ mother, Gabrielle Rodgers, 23, around 10:20 a.m. Tuesday before bolting with the babies.

Rodgers was found with critical gunshot wounds at the scene of the abduction and taken to the hospital, WTGS reported.

Police received a tip that Montgomery and the twins may have been in Effingham County.

About four hours after the shooting, Montgomery was tracked down at a home in Rincon, news station WSAV reported.

She was taken into custody on one count of aggravated assault and two counts of kidnapping, authorities said.

The twin boys were found safe at the home but were transported to a hospital for evaluation, police said.

A motive for the kidnapping has not been released.

“What happened today is every mother’s worst nightmare. We are so thankful that Matto and Lorenzo were located quickly and were ultimately unharmed,” Savannah Police Chief Roy Minter said.

“This was an all-hands-on-deck approach. Everyone in the Savannah area was looking for this suspect and the twins. The detectives in this case worked quickly, tracking down every available lead while working with our local, state and federal partners, but the case would not have moved as swiftly if it had not also been for the community assistance.”