Washington: Former President George W. Bush choked back tears eulogising "the best father a son or daughter could ever have" as official Washington turned out to honour the late President George H.W. Bush with the full pageantry of a state funeral. 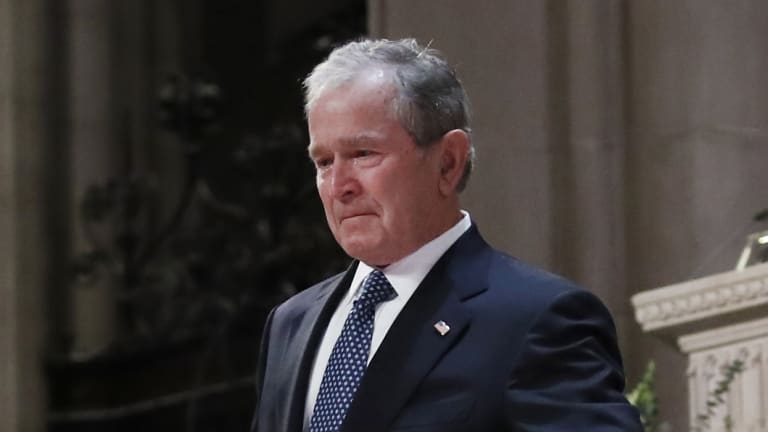 Bush paused and tapped his father's flag-draped casket twice as he walked up to the altar at Washington National Cathedral to offer a personal remembrance of the 41st president as a political leader of unrelenting optimism and steadfast personal character.

"He showed me what it means to be a president who serves with integrity, leads with courage, and acts with love in his heart for the citizens of our country," Bush said.

President Donald Trump listened from the front pew with his arms crossed, seated beside his three Democratic predecessors and their wives. He wasn't invited to speak.

Trump, who was joined by his wife Melania, shook hands with Barack Obama and former first lady Michelle Obama as he entered the service but ignored Bill and Hillary Clinton and Jimmy and Rosalynn Carter. 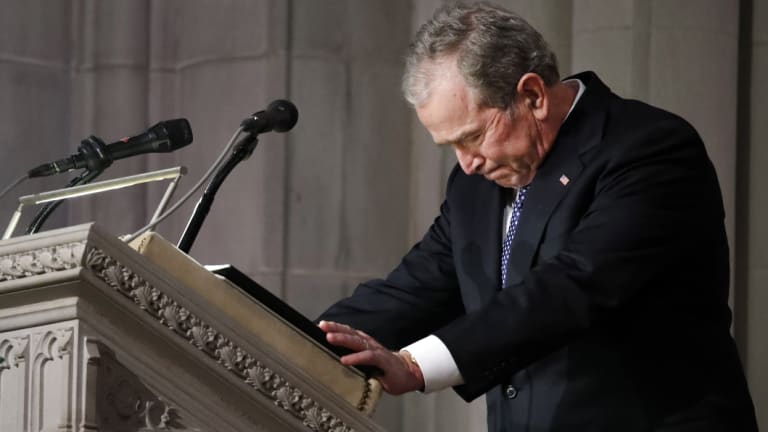 George W. Bush, who sat across the aisle with his family, paused and greeted Trump and all the former presidents.

"Looking forward to being with the Bush family," Trump tweeted shortly before the service. "This is not a funeral, this is a day of celebration for a great man who has led a long and distinguished life. He will be missed!"

Left unsaid were the years of criticism and attacks the president has levelled against the Bush family, as well as the Bush family's at times barely disguised contempt for Trump, whose approach to leadership runs at odds with the "kinder, gentler" conservatism the late president espoused.

It was the first time Trump was in close proximity to the Obamas and the Clintons since his inauguration nearly two years ago. He has since issued countless attacks on Twitter and at political rallies attacking both former first couples. 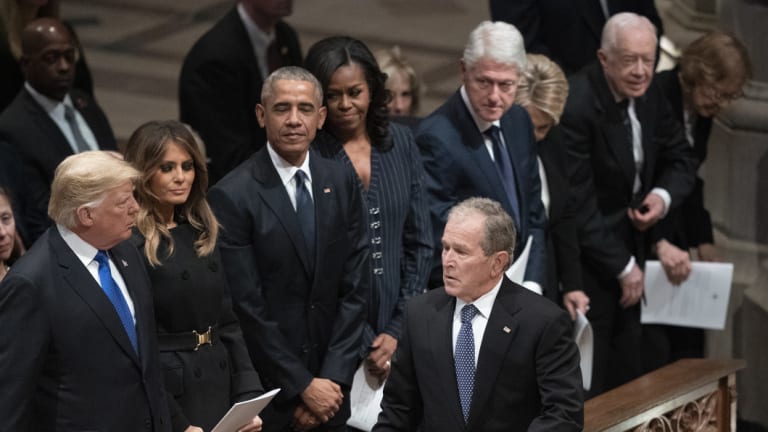 Trump wasn't welcome at the last two occasions that brought former presidents together.

Former first lady Barbara Bush, who died earlier this year, made clear she didn't want the president at her funeral.

He also wasn't invited to the funeral for Republican Senator John McCain, who died in August.

Trump's disparagement of the Bush family and its governance is voluminous. 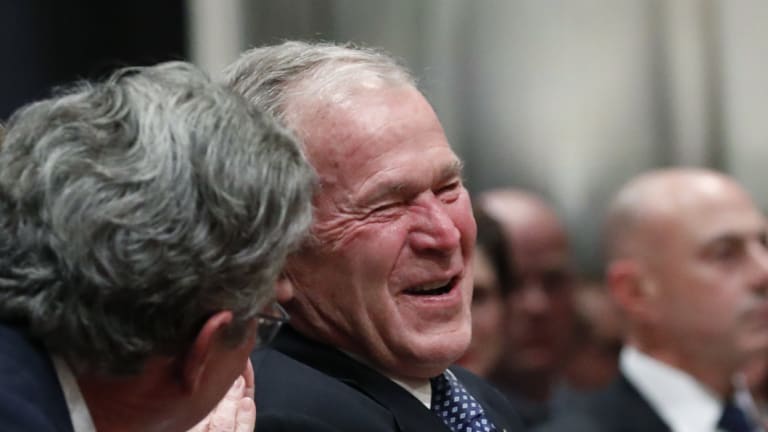 As recently as July, at a campaign rally in Montana, Trump mocked one of President H.W. Bush's signature phrases. "Thousand points of light, what the hell is that?" he asked the crowd. "Has anyone ever figured that one out?"

At a 2016 primary debate, Trump criticised George W. Bush's decision to invade Iraq in an attack on his brother Jeb, who challenged Trump for the nomination. " George Bush made a mistake. We can make mistakes, but that one was a beauty," Trump said.

Decades earlier, while the elder Bush was in office, Trump hit at a fundamental difference between them: "I like George Bush very much and support him and always will. But I disagree with him when he talks of a kinder, gentler America. I think if this country gets any kinder or gentler, it's literally going to cease to exist," Trump told Playboy in 1990.

The disdain was reciprocated. 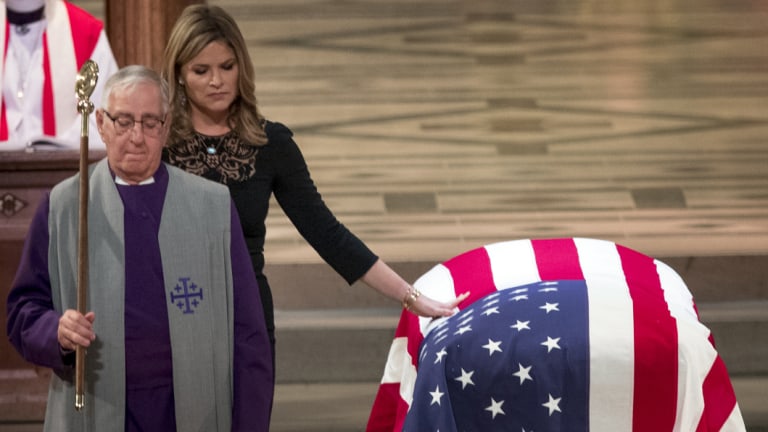 According to biographer Jon Meacham, Trump told Bush adviser Lee Atwater in 1988 that he'd be available to be Bush's running mate. Bush "thought the overture 'strange and unbelievable,'" Meacham wrote.

With the country — and the world — watching, the president and the Bush family are staging a public detente that belies their history.

Whatever his feelings about the former presidents, Trump dutifully swallowed them this week.

He has behaved in presidential fashion by declaring Wednesday to be a national day of mourning during which the federal government is closed, giving most federal employees have the day off, and travelling to the Capitol Monday evening to silently pay his respects at the late president's casket.

Trump invited former President George W. Bush and his family to stay at Blair House, the official guest residence across Pennsylvania Avenue from the White House, and crossed the street on Tuesday to pay them a visit.

But Trump wasn't invited to deliver a eulogy at the the funeral Wednesday at the National Cathedral.

"What people want to talk about is, 'Well, why isn't the president giving the eulogy?'" former Florida governor Jeb Bush — whom Trump famously derided during the 2016 Republican primary as "low energy" — said Tuesday, hinting at the tension and defusing it with a joke.

"It's because we have a unique circumstance here; my brother was president. First dibs, as we used to say," Bush said.

Jeb Bush, speaking at a Wall Street Journal event in Washington, added that Trump "couldn't have been nicer" in his condolence calls to him and to George W. Bush.

Trump's public statements about the late president since his death have been brief and positive, albeit with a hint at their cool relationship.

At his first public appearance Saturday after Bush's death was announced, Trump offered his condolences only after being asked about Bush's death by a reporter.

"He was a very fine man," Trump said of his predecessor. "He was just a high-quality man who truly loved his family."

He added, tellingly: "One thing that came through loud and clear, he was very proud of his family and very much loved his family."

But he brushed aside a question about whether he regretted any of his public disparagement of the Bushes. "Thank you very much, everybody," he said curtly, signalling that he wouldn't answer the question.