The Thames has spilled over its banks and left the Hollywood star’s tennis court, the veranda of his summer house and much of the lawn completely underwater.

The 17th-century, Grade II-listed house is located on an island in the river. The property’s garden had previously been hit by flooding in 2016.

The Hollywood star and human rights lawyer moved into the secluded home with their twins in 2016, after an intensive 18-month long refurbishment. 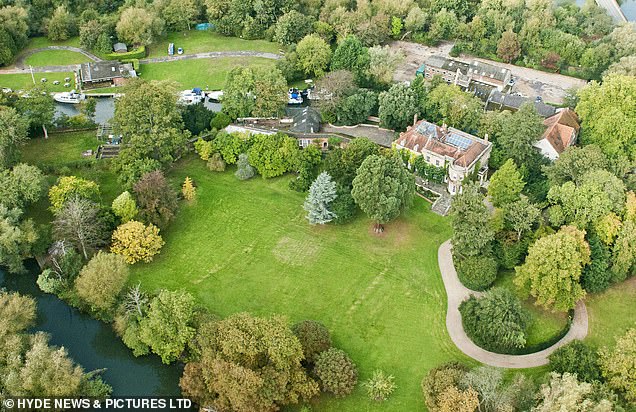 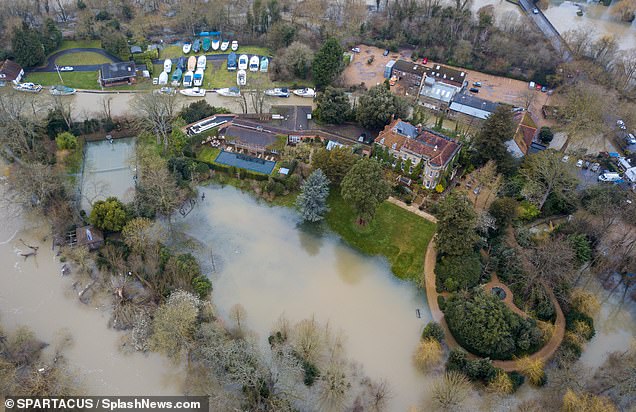 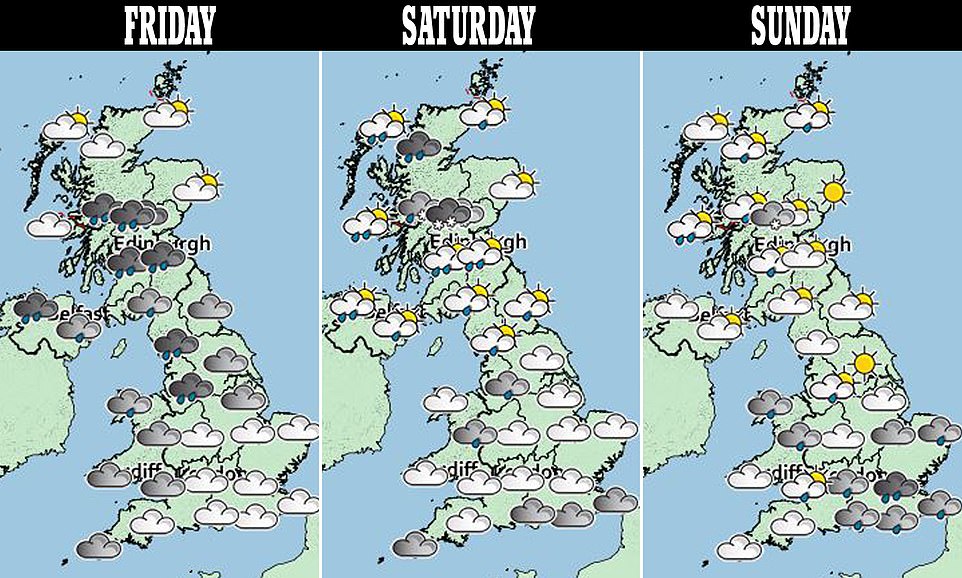 The Clooneys paid an undisclosed sum for the listed property, which was put on the market for £7.5 million, in September 2014, a couple of weeks after their three-day wedding extravaganza in Venice.

Earlier this month the high-profile pair applied for planning permission for an outhouse to bolster security as the famous home attracts more tourists. 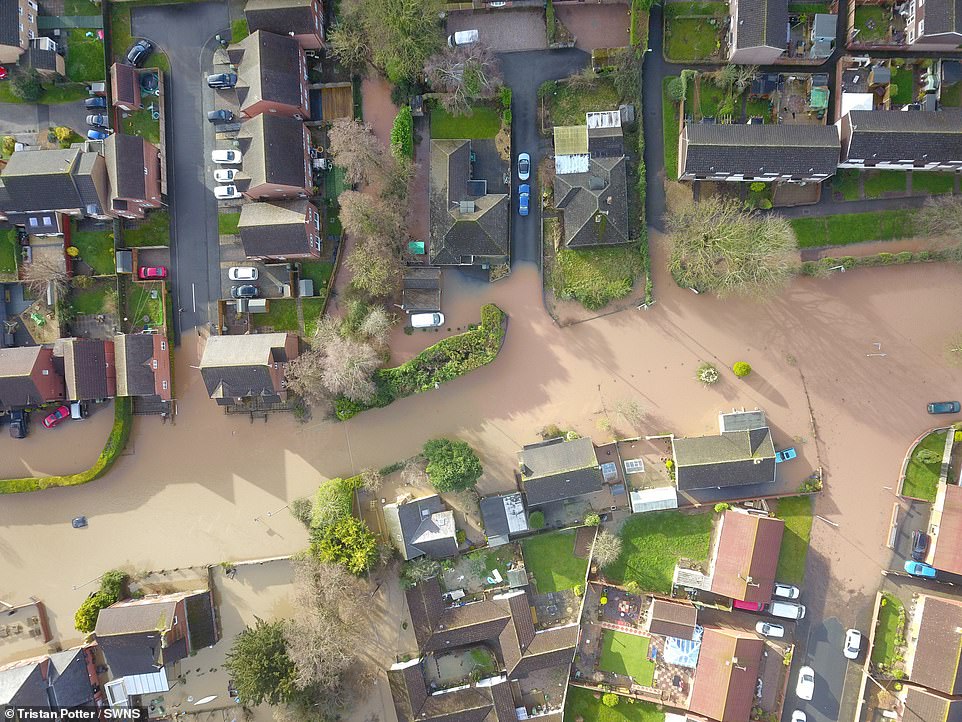 Aerial images show the extent of flooding in Hereford, Herefordshire, on Monday after the nearby river burst its banks over the weekend

It comes as a staunch Tory voter whose home was swamped by floods has urged Boris Johnson to leave his country retreat to see the damage in the flood zone for himself.

Vic Haddock said he had suffered £100,000 worth of damage to his riverside home, adjacent canoe hire business and holiday rental cottage. 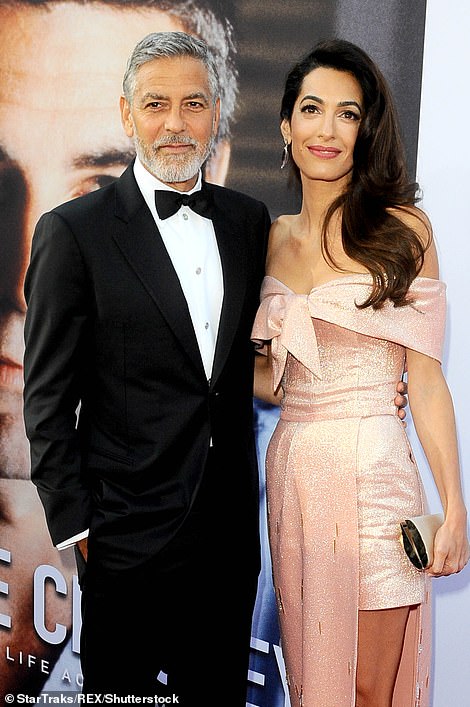 And the 60-year-old threw down the gauntlet to the Prime Minister, saying: ‘I’ve supported you – now come and support me.’

Condemnation was growing over Mr Johnson’s response to the flooding yesterday.

Jeremy Corbyn said it was the ‘duty of the Prime Minister to be there in places where there are difficulties’.

The Labour leader was visiting Rhydyfelin, near Pontypridd, South Wales, which had been left under water on Sunday as Storm Dennis ravaged the UK.

The PM’s official country residence, Chequers in Buckinghamshire, is currently being renovated.

Mr Haddock, from Ironbridge, Shropshire, said while flood barriers were erected by the council on the Wharfage, on the opposite side of the River Severn, residents on his row of cottages had no such protection.

He told Sky News: ‘I’m a staunch supporter of Boris Johnson, and I believe he’s going to be a great man for the country.

‘Now I’ve supported him, come on Boris – come and support me. Come and see me, I’ll buy you a pint, we’ll have a chat about this, and find out who’s finally responsible to give us a little bit of aid.’

He said the floods were the worst he could remember in his 17 years living in the area. The Fire Brigades Union also added to the growing criticism of Mr Johnson, accusing the Government of failing to plan for floods in the long term. 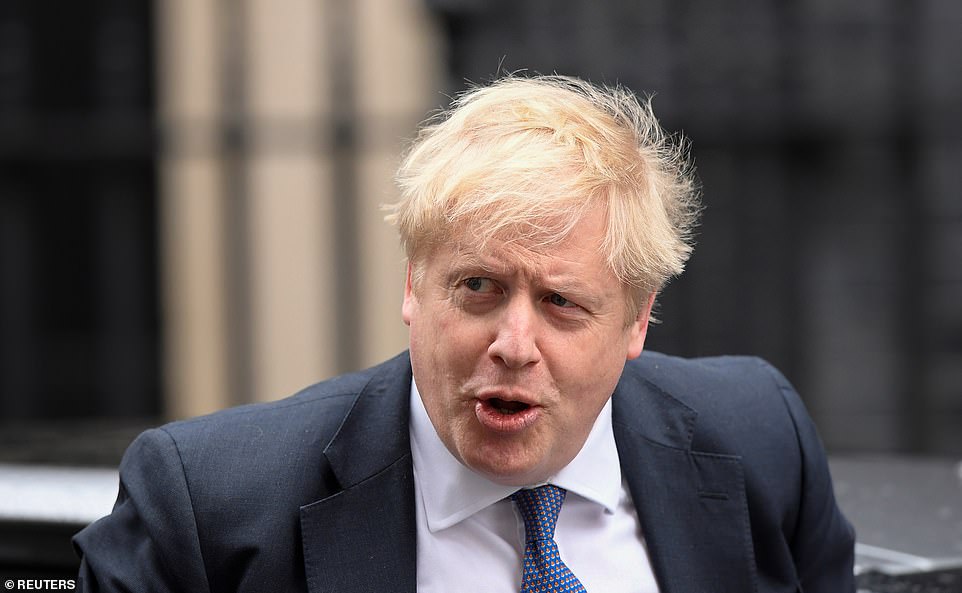 Vic Haddock said he had suffered £100,000 worth of damage to his riverside home, adjacent canoe hire business and holiday rental cottage

It highlighted that there had been cuts of more than £140million to English fire and rescue services over the four-year local government finance settlement.

‘Firefighters are on the ground fighting to keep people, homes, and businesses safe, while Boris Johnson cowers in Westminster.

‘Flooding is nothing new, and will only get worse with climate change, but our ability to tackle its consequences has been utterly undermined by a lack of long-term planning from this shambles of a Government.’

The condemnation came as the Environment Agency warned that ‘scary’ floods could spread to northern England this weekend.

Officials said further heavy rain could lead to ‘significant river flooding’ in some areas such as the Pennines and parts of Yorkshire.

And the Environment Agency’s manager for Herefordshire and Worcestershire – two of the counties to have suffered the worst of the flooding this week – warned that the current crisis was ‘going to get worse’.

Dave Throup was responding to figures revealing that the level of the River Wye on Monday peaked at 6.99m (22ft 11in) – more than half a metre higher than any previous recorded figure.

Mr Throup tweeted: ‘It’s getting scary folks. What I’ve seen over the last few days isn’t normal. It isn’t even the new normal. It’s going to get worse. We need to adapt and respond. And fast.’

Some 70,000 homes in areas prone to flooding are at risk of becoming uninsurable, a report has warned.

Political think-tank Bright Blue predicted there would be ‘flood ghettos’ of houses in England in high-risk zones that were not covered in the coming years.