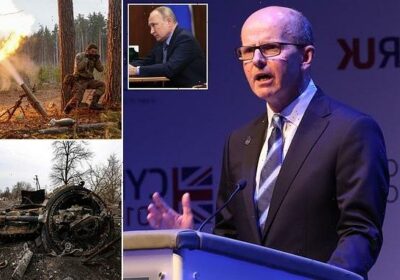 Putin’s failing war: GCHQ boss rips apart the ‘incompetent’ invasion of Ukraine in an unprecedented attack as he reveals new intelligence shows soldiers refusing orders, sabotaging their own equipment and accidentally shooting down their own aircraft

The director of GCHQ has launched an unprecedented attack on Vladimir Putin, claiming his bungled ‘personal war’ in Ukraine had backfired badly.

In an excoriating verdict on the ‘failing’ invasion, Sir Jeremy Fleming said the command and control of Russia’s campaign was in ‘chaos’.

The spy chief revealed new intelligence showing that ill-equipped Russian soldiers are refusing to carry out orders, sabotaging their own equipment and even accidentally shooting down their own aircraft.

Sir Jeremy said Putin’s ‘misjudgments’ had forced him to adopt plan B – ‘barbarity against civilians and cities’.

The head of Britain’s eavesdropping intelligence agency also warned China not to be ‘too closely aligned’ with a country that wilfully breaks all the rules and ‘norms for a new global governance’. 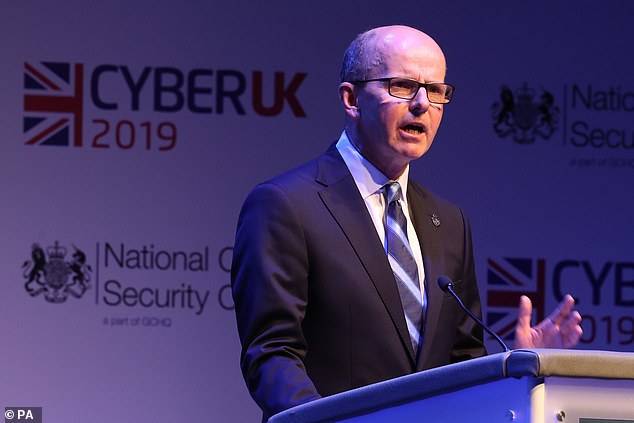 In an excoriating verdict on the ‘failing’ invasion, Sir Jeremy Fleming said the command and control of Russia’s campaign was in ‘chaos’ as he launched an unprecedented attack on Vladimir Putin’s ‘personal war’ 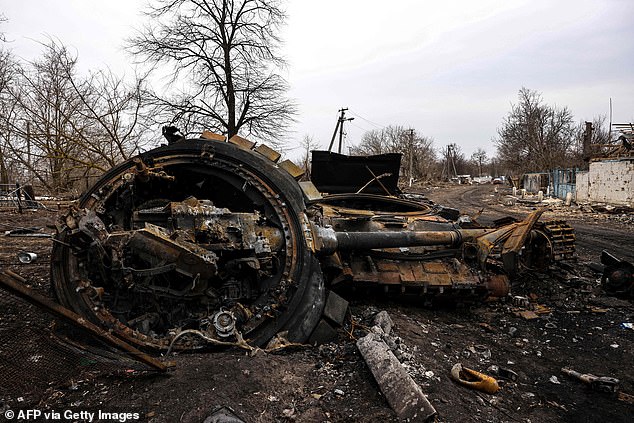 The spy chief revealed new intelligence showing that ill-equipped Russian soldiers are refusing to carry out orders, sabotaging their own equipment and even accidentally shooting down their own aircraft. Pictured: A destroyed Russian tank near Kyiv 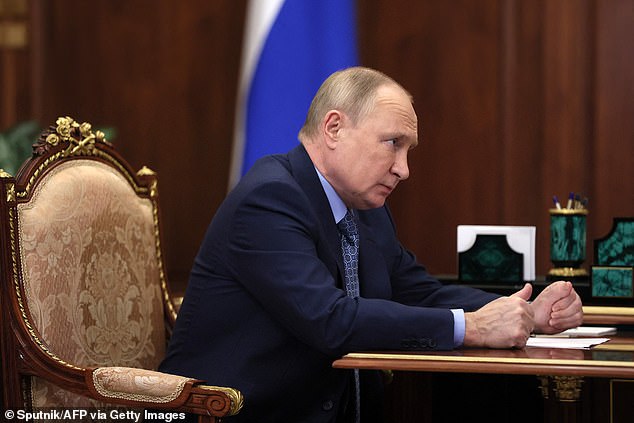 His unprecedented public rebuke of a foreign leader came as US officials said Putin had ‘lost faith’ in his top brass, who are too afraid to tell him the truth about the war.

Sir Jeremy said: ‘We’re now seeing Putin trying to follow through on his plan but it is failing. And his Plan B has been more barbarity against civilians and cities.

‘It increasingly looks like Putin has massively misjudged the situation. It’s clear he misjudged the resistance of the Ukrainian people.

‘He underestimated the strength of the coalition his actions would galvanise. He under-played the economic consequences of the sanctions regime.

‘He over-estimated the abilities of his military to secure a rapid victory.’

He added: ‘We’ve seen Russian soldiers – short of weapons and morale – refusing to carry out orders, sabotaging their own equipment and even accidentally shooting down their own aircraft.

China was warned not to become ‘too closely aligned’ with Russia last night.

GCHQ chief Sir Jeremy Fleming suggested Beijing was ‘not well served’ in cosying up to a nation which wilfully ignores the rules of ‘global governance’. 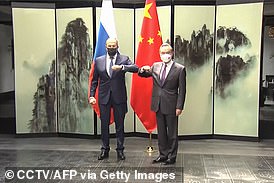 The latter declared the two nations were moving toward creating a new ‘just, democratic world order,’ in a video released by the Russian Ministry of Foreign Affairs.

From the Kremlin’s point of view, it regards China in the current crisis as a supplier of weapons, a provider of technology, a market for its oil and gas and a means to circumvent sanctions.

Sir Jeremy said China also stood to gain cheap energy and an ally in its opposition to the United States, but he warned the strategic alliance could backfire.

Speaking at the Australian National University in Canberra, he said: ‘There are risks to them both, and more for China, in being too closely aligned… and it is equally clear a China that wants to set the rules of the road – the norms for a new global governance – is not well served by close alliance with a regime that wilfully and illegally ignores them all.’

‘Even though we believe Putin’s advisers are afraid to tell him the truth, what’s going on and the extent of these misjudgments must be crystal clear to the regime.’

Speaking during a visit to Australia to celebrate the 75th anniversary of the Australian Signals Directorate, GCHQ’s Australian equivalent, the spy chief said: ‘We know Putin’s campaign is beset by problems – low morale, logistical failures and high Russian casualty numbers.

‘Their command and control is in chaos. We’ve seen Putin lie to his own people in an attempt to hide military incompetence.’

He added: ‘It all adds up to the strategic miscalculation that Western leaders warned Putin it would be. It’s become his personal war, with the cost being paid by innocent people in Ukraine and increasingly by ordinary Russians too.

‘The great irony is that through his actions, Putin has brought upon himself exactly what he was trying to avoid – a Ukraine with a renewed sense of nationhood, a Nato that is more united than ever, and a global coalition of nations that condemn his actions.’

In a rare public address in Canberra, Sir Jeremy warned that Putin was planning to use a shadow branch of the Russian military known as the Wagner Group as ‘cannon fodder to try to limit Russian military losses’.

His candid remarks came as Western intelligence revealed Putin ‘didn’t even know his military was using and losing conscripts… showing a clear breakdown in the flow of accurate information’.

A US official said: ‘We have information that Putin felt misled by the Russian military.

‘There is now persistent tension between Putin and the MOD, stemming from Putin’s mistrust in MOD leadership.’

Moscow pledged yesterday to withdraw troops from Kyiv and Chernihiv in what it said was an effort to build trust in ‘constructive’ peace negotiations.

Ukraine said it could see no significant withdrawal of Russian forces.

President Volodymyr Zelensky said the signs were positive ‘but those signals do not drown out the explosions or Russian shells’.