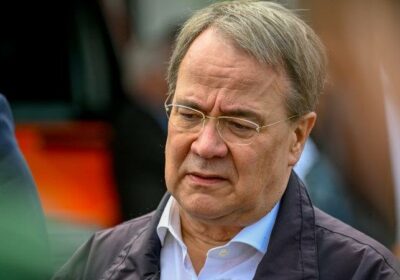 Berlin: The frontrunner to succeed Chancellor Angela Merkel in Germany’s September election has apologised for a scene in which he was seen laughing in the background as the country’s president delivered a statement on the devastating floods in western Germany.

Armin Laschet, the candidate of Merkel’s centre-right Union bloc to be Germany’s next leader, is also the governor of North Rhine-Westphalia state — one of two badly hit by last week’s floods. On Saturday (German time), he visited the town of Erfstadt, which was the scene of a dramatic rescue effort after the ground gave way, with President Frank-Walter Steinmeier. 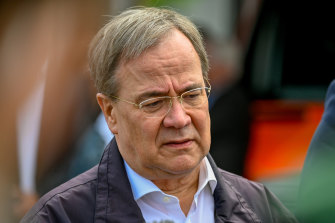 While Steinmeier gave a statement to reporters after the visit, Laschet and a group of others stood in the background. Photos showed him turning to someone else and laughing.

Lars Klingbeil, the general secretary of the center-left Social Democrats, told Sunday’s Bild am Sonntag newspaper that Laschet’s behaviour was “lacking in decency and appalling”.

“They say that people’s character shows in times of crisis,” he added.

Laschet later took to Twitter to explain himself and thank Steinmeier for his visit.

“The fate of those affected, which we heard about in many conversations, is important to us,” he wrote. “So I regret all the more the impression that arose from a conversational situation. That was inappropriate and I am sorry.”

The Union bloc currently leads polls ahead of the environmentalist Greens, with the Social Democrats in third place. The election is on September 26.

At least one more person died in the flash floods in southern Germany on Sunday, adding to the devastation after flooding in the country this week that killed more than 150 people.

The Berchtesgadener Land district in Bavaria, which borders Austria, became the latest region to be hit by record rainfall and ensuing floods.

Sunday’s death brought the death toll to 156 in the country’s worst natural disaster in almost six decades, and the number of dead across western Europe to more than 180.

Some 110 people were killed in the worst-hit Ahrweiler district south of Cologne. More bodies are expected to be found as the flood waters recede, according to police.

Finance Minister Olaf Scholz told weekly Bild am Sonntag that the government would be readying more than €300 million ($480 million) in immediate relief and billions of euros to fix collapsed houses, streets and bridges.

Scientists have long said that climate change will lead to heavier downpours. But determining its role in these relentless rainfalls will take at least several weeks to research, scientists said.