Home » World News » From the Archives, 1985: Uluru handed back to its traditional owners Uluru witnesses a curious mix as one culture honors another

Tonight at dusk the traditional owners of Uluru National Park will at last own in white law the land they feel they have always owned under their own law. 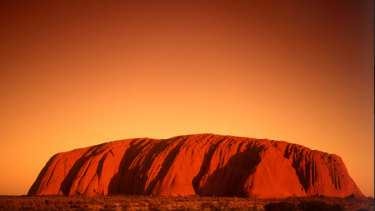 And the ceremony to commemorate this historic handover of title deeds will be a curious mix of two cultures which have nothing in common.

The cultural clash was apparent yesterday as hundreds of Aborigines packed into Toyota buses and pick-up trucks started arrived at the camp near the north side of the rock.

Most of the white visitors came by chartered plane and headed straight for the luxury Yalara tourist complex which rises from the red desert like a film-set mirage.

There have been a number of compromises between the Aboriginal way and the white way. The Governor-General, Sir Ninian Stephen, can only stay a short time. So the owners, who call themselves Anangu, have agreed to break with tradition and perform a special dance known as Inma during the last hours of daylight instead of during the dark of night.

They have modified other plans as well. Before the Anangu can celebrate with dance and songs that tell the story of their law, or Tjukurpa, Sir Ninian must perform the ritual handing-over of title deeds according to English law.

The Anangu wanted a senior elder, Nipper Winmati, to receive the title and hand it to his grandson, Kiatipi, to symbolise ancestral links. 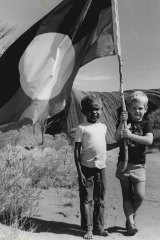 Richard Morton (L) and Simon McKay at Uluru for the historic handover.Credit:Kenneth Stevens

But this simple act did not conform with legal provisions requiring a member of the Aboriginal Land Trust to receive the title, which will be leased back immediately to the Commonwealth for 99 years.

There has been no protest over the changes. These are small concessions beside the much larger sacrifices these people had to make.

Late yesterday the traditional owners rehearsed on a make shift stage carved out of the earth while white advisers and helpers worked in the background. Behind them, Ayers Rock, or Uluru, staffed a show of its own as the sun moved across its corrugated surface.

The Aboriginal Affairs Minister, Mr Holding, and his wife Judy, stayed away. Members of the local community took them into the bush to look for wichetty grubs.

About 1000 people are expected to attend tonight’s ceremony, and the guest list reads like a ‘Who’s Who’ of people associated with the Aboriginal cause, including the former Labor Aboriginal Affairs Minister, Mr Gordon Bryant, and the author of “The Chant of Jimmie Blacksmith’, Mr Thomas Keneally, as well as one or two people from the mining lobby.

The chief opponent of the Ayers Rock handover, the Chief Minister of the Northern Territory, Mr Tuxworth, will hold a news conference at the Yalara Tourist Resort today in an eleventh-hour bid to get his message across.

Mr Tuxworth is one of many conservative politicians who have disputed the right of Aborigines to claim the park which includes Uluru and Katatjuta (Mt Olga), two of Australia’s most well-known landmarks.

This right was re-enforced by the former Aboriginal land commissioner, Mr Justice Toohey, in 1979 when he identified 104 owners of Uluru and 47 owners of Katatjuta after many hours of listening to Aboriginal witnesses tell of their attachment to the land.

Old people now living at the rock can remember catching their first sight of white men.

Some refuse to leave the rock. In 1965 the Department of Aboriginal Affairs recorded the frustration with the way Aborigines in the region resisted attempts to move them into established settlements. One official wrote at the time, “it seems that their main object is to carry out rituals that are important to them.” Mr Justice Toohey also was impressed by the strong ceremonial life.

“The evidence of many witnesses was confirmation of this,” his report said. “The attitude of people at sites around Uluru… where songs and stories, very much part of the land, were recounted, showed great enthusiasm and veneration.”

There was excitement among Aborigines last night as they prepared for the handover. Although the owners will lease it back to the Commonwealth for all Australians to enjoy, their presence on the new board of management will give them the first chance they have had since whites arrived to act as legal custodians.