From the Archives, 1970: Bomb blasts Yugoslav consulate in Hawthorn 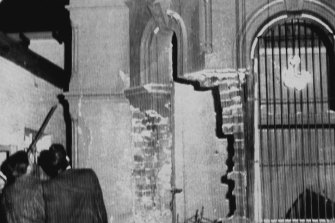 The shattered building and the 10ft by 5ft hole blasted in the front wall.

A bomb tore a gaping hole in the front office of the Yugoslav Consulate in Hawthorn late last night.

The explosion shattered windows throughout the building. It was heard a mile away and glass was thrown 30 feet to the road.

The caretaker, Mr C. Milic, and his wife were in the building when the bomb went off. They were not hurt.

The consulate, in Lisson Grove, Hawthorn, is set about 20 feet back from the road.

The bomb went off just before 11 pm. Police believe it was planted and detonated by a time device.

The bomb ripped a 10 feet by five feet hole in the front office, scattering glass, bricks and mortar across the front lawn. It blew out windows in three nearby buildings.

Two heavy metal security grills were blown from their mountings by the explosion. 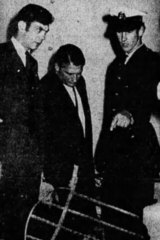 Inside the office, chairs, tables and benches were blown across the room and splintered into pieces on the back wall.

Plaster on the ceiling and light fittings were blown off.

In an adjoining room sets of venetian blinds were torn to shreds.

The section where the bomb went off was weakened by the explosion. It is feared that the section could collapse.

Police, fire brigade and ambulance were on the scene within minutes of the blast.

Late last night it was not known what kind of bomb was used.

Until three weeks ago, following bomb threats, the consulate had a permanent guard.

Last night the consulate building and grounds were well lit by floodlights. A savage guard dog was chained at one side of the building.

Mrs Anne Regan, who lives next door to the consulate, said she was asleep when the explosion “rocked the whole house.”

“I ran to grab the three children from their bedrooms, and found them covered with glass.

“My husband and I took them to a neighbour’s place. By that time there were a lot of people in the street,” she said.

The consul (Dr S. Cvetkovic) drove to the consulate about half an hour after the bomb went off.