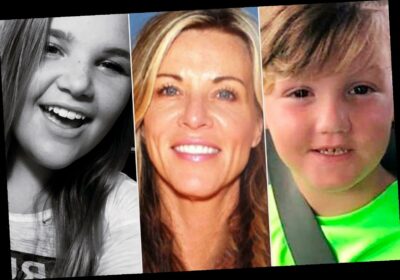 Years before Lori Vallow became the center of an investigation into the mysterious disappearances of her children, whose bodies were later found on her husband's property in 2020, she was an aspiring Mrs. Texas beauty queen.

During the 2004 pageant, the fit mother of two can be seen strutting across a stage in a teal blue bikini, looking over her shoulder to give the audience a flirty glance as she traipsed off.

In exclusive footage airing in a new, two-hour 20/20 special on ABC Friday at 9 p.m. ET, Vallow — then named Lori Ryan, because she was married at the time to third husband Joseph Ryan — is asked by the judges, "What makes you tick?"

Wearing a demure black blazer with a pageant sash, Vallow cheerfully replies, "Being a good mom is very important to me and a good wife and a good worker. And being all those things is not easy!

"So I'm basically a 'ticking time bomb,'" she says with a laugh. (An exclusive clip of the 20/20 episode showing Vallow at the pageant is below.)

Today, the self-described "ticking time bomb" sits behind bars in an Idaho jail on $1 million bond, facing multiple felony charges including felony child abandonment and solicitation of a crime in connection with the disappearance of her kids, Tylee Ryan, 17, and Joshua "J.J." Vallow in September 2019. She was arrested in Hawaii in February 2020 after authorities gave her a five-day deadline the month before to produce the children and prove they were safe, which she failed to do.

In June 2020, the children's charred remains were found buried on Daybell's property in Idaho.

Vallow, who was already in custody, and Daybell, who was arrested in June 2020, were then both charged with conspiracy to commit alteration, destruction or concealment of evidence since prosecutors believe they knew where the children were buried, say prosecutors.

Authorities are also investigating the deaths of two of Vallow's ex-husbands, Daybell's ex-wife and her brother, who was found dead under mysterious circumstances.

Besides showing Vallow in the days before her life exploded into controversy, 20/20's year-long investigation spanning seven states goes in-depth into her shattered marriages, her ex-husband's deaths and her obsession with doomsday writer and self-proclaimed prophet Chad Daybell — who would become her fifth husband.

20/20 Co-anchor Amy Robach interviews a friend of Vallow's who talks about how Vallow became a "superfan" of Daybell's and his end-of-times ideology.

Robach also interviews Vallow's former in-laws, who discuss the changes they saw in her — and what they think went wrong.

The couple has not been charged in connection with any of the deaths of their family members.