French strikers cut ELECTRICITY to thousands of homes, companies and even the Bank of France in bid to force Macron to scrap hated pension reforms

Thousands of French homes, companies and even the Bank of France have been left without power as strikers march through the streets demanding President Emmanuel Macron drops his hated pension reforms.

Trade unions deliberately severed the electricity supply to 150,000 homes across Bordeaux, Lyon, Nantes and Cherbourg yesterday, and threatened to repeat the action unless the government backs down.

Clinics, fire stations, and railway stations were also left with the lights off, said the government, as the capital Paris remained wracked by protests and without public transport.

Restaurant bookings have also collapsed by 40 to 50 per cent, the French Chamber of Commerce said today, while there was a 30 per cent fall in visitors to city shopping centres despite the Christmas rush, and a six per cent fall in footfall in malls outside cities.

President Macron is trying to equalise the retirement age between the private and public sector, which stands at 62 in the private sector and, for example, just over 50 for those working for the state train company SNCF. 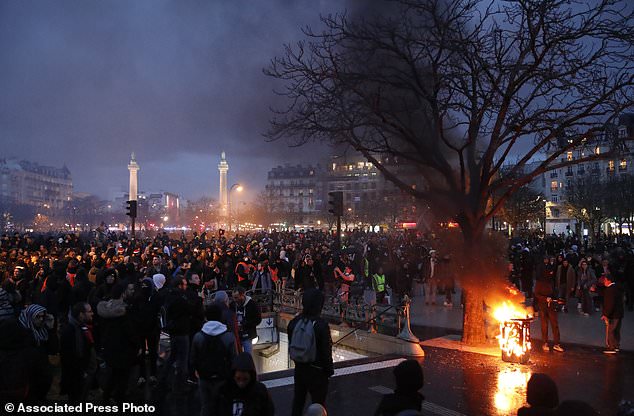 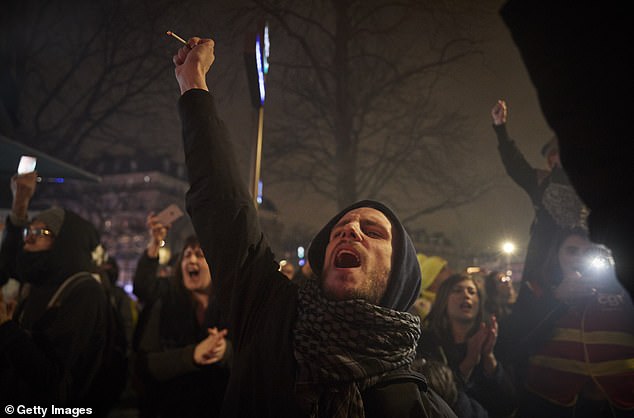 The government has said that clinics, fire stations and railway stations were also affected by the disruption. A protester is pictured raising his arm and shouting in Place de la Nation, France 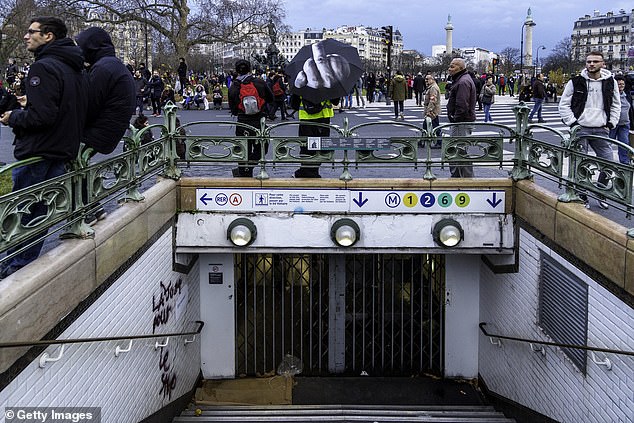 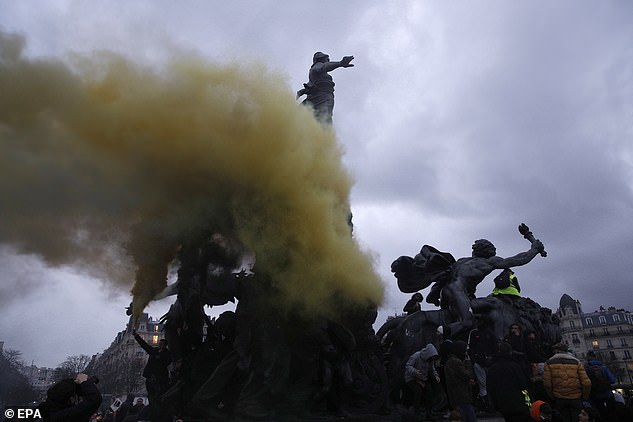 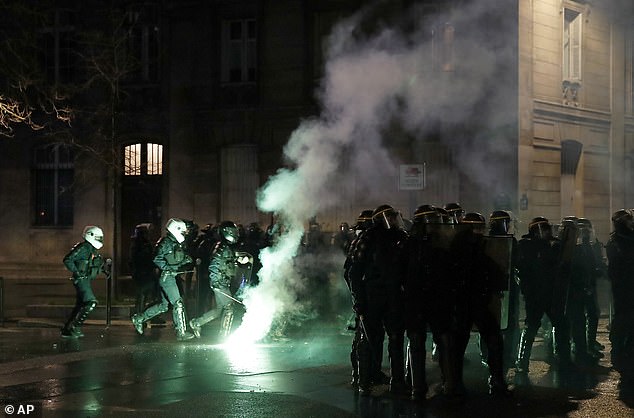 Hundreds of protesters took to the Place de la Nation in Paris yesterday to burn bins and voice their protest at the government.

The head of hardline CGT union has defended the power cuts, saying they were ‘necessary’.

‘I understand these workers’ anger,’ he said. ‘These are targeted cuts. You’ll understand that spitting on the public service can make some of us angry.’

CGT central union delegate at electricity supplier RTE, Francis Casanova, has said that the strikes are ‘not malicious’.

‘This is a way for RTE employees to show that if there is electricity in this country, it is because they are at work every day.’ 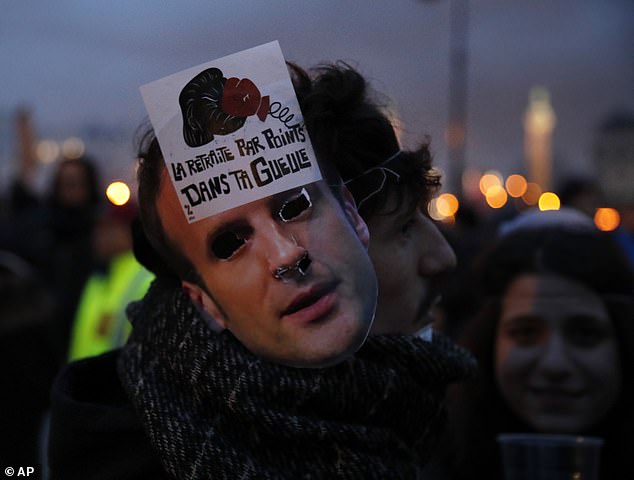 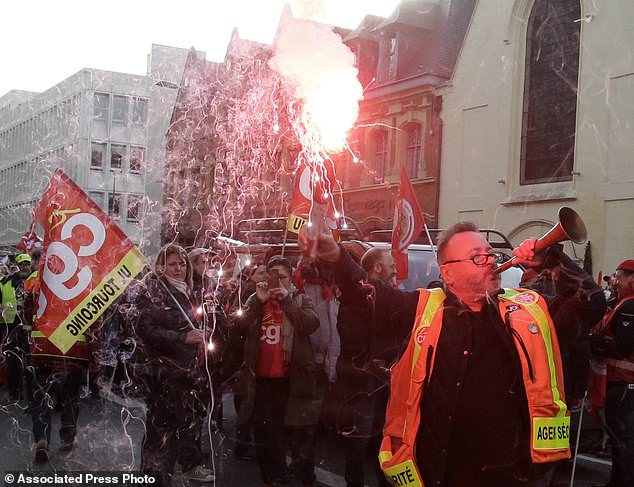 A protester holds flares during a demonstration in Lille, northern France, yesterday. Teachers, doctors, lawyers and workers at the Eiffel Tower walked out of their jobs to resist the higher retirement age 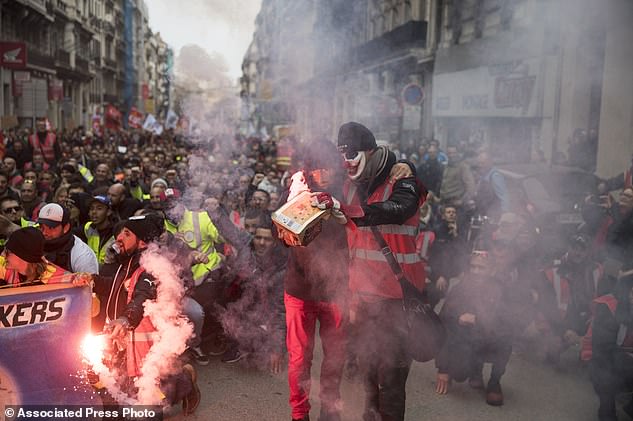 Dock workers in masks were seen lighting a firework together during a march in Marseille, southern France, yesterday 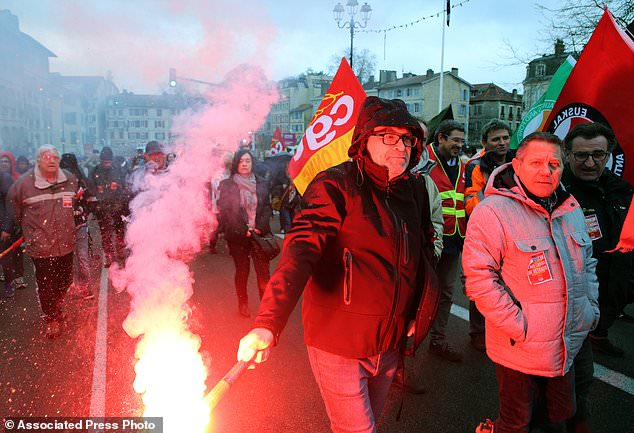 ‘But clinics, metro stations, fire brigades and thousands of French people also saw power cuts. This is far from normal ways of striking.’

The government is keen to reach a truce before Christmas, when thousands of people will be travelling home to family across the country, but unions have said they are not prepared to end the three-week action, reports The Local France.

Macron has already been forced to change the lead negotiator for the reform, lawmaker and pensions tsar Jean-Paul Delevoye, who resigned following accusations of a conflict of interest. 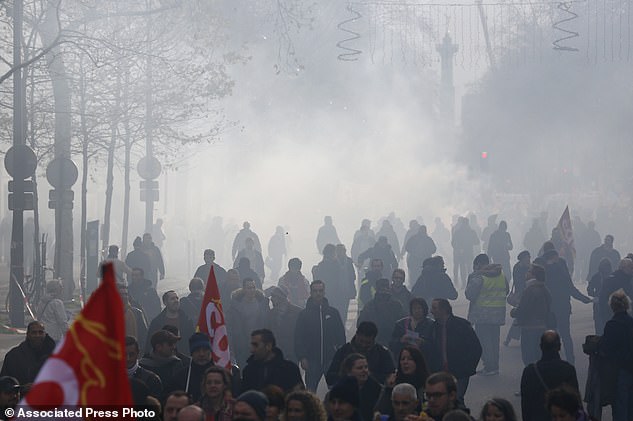 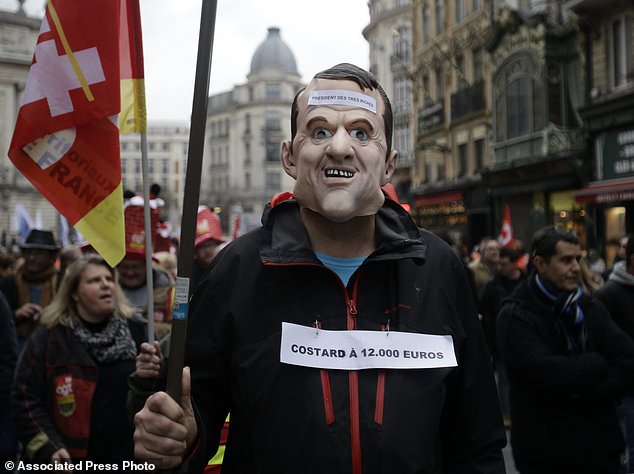 Macron wants to turn the myriad of French pension systems into a single points-based one.

That would force employees at state-backed companies such as the national railways company SNCF or power utility EDF, who currently enjoy more generous pension plans than private-sector workers, to work longer.

Train drivers at SNCF can retire at just over 50, for instance, against 62 for those in the private sector. That means French taxpayers have to plug in the deficit of the railway company’s pension system to the tune of 3 billion euros every year. 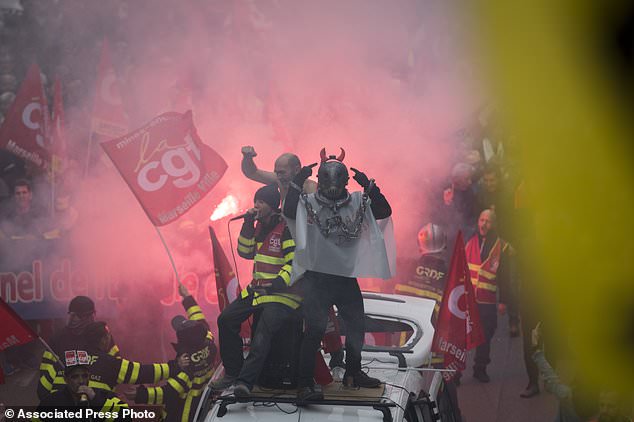 Protesters light flares during a march in Marseille, southern France. Three are pictured here standing on top of a vehicle surrounded by CGT flags 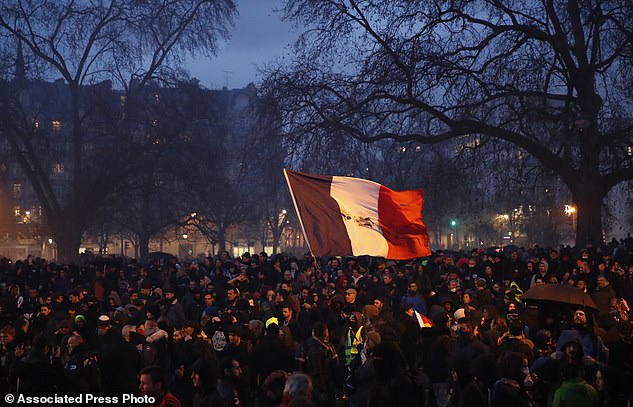