Paris: The head of France’s armed forces has pledged to punish 20 French generals and 18 French active soldiers, including officers, who signed an open letter warning of the risks of impending “civil war” at the hands of “fanatics” and Islamists, saying they have breached their “duty of reserve”.

Regarding the generals, “each one (will go) before a senior military council, ” General Francois Lecointre told Le Parisian newspaper, and could be “delisted” or “put into immediate retirement”. 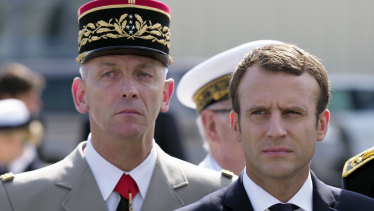 As “second section” reservists, the generals have left active service but are still answerable to the defence ministry and thus obliged to remain neutral in public.

As for the 18 still in active service, including four officers, they face dismissal, in particular the higher-ranking signatories. “I believe that the higher the responsibilities, the stronger the obligation of neutrality and exemplarity,” said General Lecointre.

The letter was initially published in Valeurs Actuelles, a right-wing news magazine, on 21 April – the 60th anniversary of a failed coup d’état against Charles de Gaulle. Initially signed by 1200 members of the military, more than 8000 servicemen and women had added their names to it by Thursday.

The letter appeals to President Emmanuel Macron to stop France from descending into chaos and “civil war” fomented by “fanatic partisans” for splitting the country.

Under the influence of left-wing dogma France is “disintegrating with the Islamists of the hordes of the banlieue [suburbs] who are detaching swathes of the nation and turning them into territory subject to dogmas contrary to our constitution,” they claim.

The main instigators of the letter are alleged to have ties to far-right, anti-immigration movements in France, as well as conspiracy theorists close to the Yellow Vest movement.

The first signatory, Jean-Pierre Fabre-Bernadac, ran security in the 1990s for the far-right National Front, the Canard Enchaine newspaper reported.

Others include retired general Antoine Martinez, who founded “Volontaires pour la France”, a right-wing group committed to defending “traditional French values”. He has declared himself a candidate for next year’s presidential election in a bid to avoid “civil and ethnic war”. 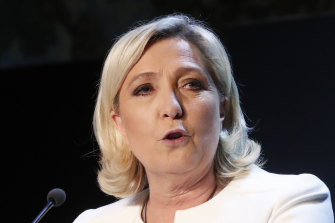 However, General Lecointre denied that there was any far-right radicalisation in the army.

“For the most part, these are people who left the army 20 or 30 years ago,” he said. “If these people want to express themselves, let them do so in their own name without putting to the fore their status as former soldiers or their rank.”

The letter warns that failure to act now could see “an explosion and then intervention by our comrades on active service in the dangerous mission of protecting our civilised values and the safety of our compatriots”.

“There is no time to waffle, or tomorrow civil war will put an end to this growing chaos and the dead, for whom you will bear responsibility, will be counted in the thousands.”

The signatories say that they are “ready to support politicians who take into account the safety of the nation”.

It was initially dismissed by Macron’s government as a diatribe from a bunch of pensioners who “only represent themselves”.

However, it gained traction after a fatal knife attack at a police station south-west of Paris, which is being treated as a possible terrorist attack.

Marine Le Pen, leader of the far-right National Rally and presidential candidate, said she wholeheartedly agreed with their analysis and asked the signatories to join her “battle for France.” 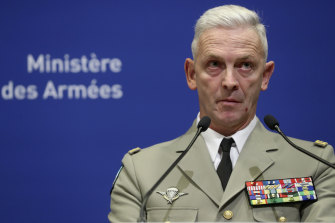 “I don’t see any call for insurrection. I see people who are expressing a fear,” she told BFMTV.

“I think, on the contrary, we need soldiers in public debates…This is not an accusation that would have been levelled at (Charles) de Gaulle,” she claimed.

The opposition left called on the signatories to be tried for urging “civil disobedience with a view to harming national defence” – a crime punishable by five years in prison and a €75,000 fine. 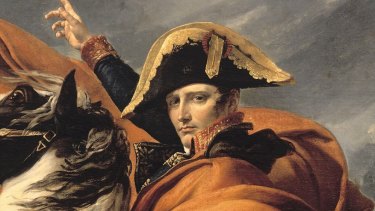 “This fantasy of the general riding to the rescue”: Napoleon Bonaparte.

French prime minister Jean Castex dubbed the rare foray into politics by military figures “an initiative against all of our republican principles, of honour and the duty of the army”.

However, a Harris Interactive poll for LCI found that 58 per cent of those asked agreed with the letter’s conclusions.

Jean-Dominique Merchet, defence expert at L’Opinion, said he was surprised that the tribune had made so many waves given that the signatories were old, notoriously far-right generals or low-level servicemen and women almost all no longer on active duty.

“The question I ask is why? I think it harks back to old bugbears that haunt the French political unconscious, namely the recourse to generals in times of crisis,” he told the Telegraph.

“It’s an old story that started with Napoleon and ended with De Gaulle and does say something about a country that is unsure where it is heading. Every time there is a political crisis, whatever the cause, you get this fantasy of the general riding to the rescue.“