Paris: When Catholic parishioners entered the basilica of Notre-Dame in the Riviera city of Nice on Thursday morning, it was to say quiet final prayers before France descended into a month-long lockdown to stem its raging coronavirus outbreak.

Instead, at 8.30am in the Neo-Gothic church — Nice's largest — screams erupted in the white and gold building as a 21-year-old Tunisian brandishing a large knife jumped out of the shadows and pounced on a worshipper aged 60, partially beheading her.

The suspect, identified as Brahim Aoussaoui, had arrived by train from Paris two hours earlier, at 6.47am, changing clothes before walking 400 metres to the church at 8.13am, according to Paris prosecutor Jean-François Ricard. Leaving his first victim with a "very deep throat wound, basically a decapitation", he then turned on Vincent Loques, 55, the church warden and a father of two girls, stabbing him and slitting his throat. 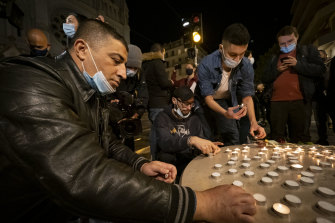 People pay tribute in front of the Notre Dame Basilica in Nice.Credit:Getty Images

He then launched a frenzied assault on a woman aged 44, who managed to run across the road to a hamburger outlet where she died of her wounds shortly afterwards.

"I heard people screaming," said Jacques Dalmasso, who lives in the area. He said he knew Loques, adding: "We used to drink coffee in the morning together at the boulangerie.

"I was standing at the [ATM]. I left my credit card in the machine and ran. I saw a woman, around 40, run out of the cathedral. She came out of a door and hid in the Isla Burger restaurant."

The boulangerie manager, Laila, said: "This isn't the Nice we know. I am very angry. We are no longer safe. I feel like we're living a nightmare."

Daniel Conilh, a 32-year-old waiter at the Grand Café de Lyon, a block from the church in Nice, said "shots were fired and everybody took off running" as national and municipal police stormed the building and shot the suspect, critically injuring him.

"A woman came in straight from the church and said, 'Run, run, someone has been stabbing people'," he said.

A copy of the Koran belonging to the suspect, two telephones and a bag containing two other knives were found in the church.

As sirens wailed, a grim-faced Christian Estrosi, Nice's mayor, said there could be no doubt that this was once again the work of Islamist extremism in a city that had already "paid a very high price" for terrorism. The capital of the French Riviera is still scarred from a 2016 attack in which a terrorist ploughed his truck into Bastille Day crowds at the Promenade des Anglais, killing 86. 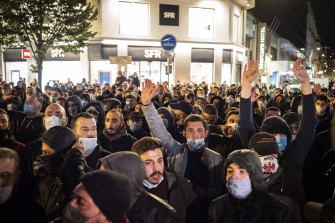 The assailant "didn't stop shouting Allahu Akhbar even under medication," Estrosi said. The suspect was in a critical but stable condition in Nice's Pasteur hospital, where police had to bar a group of around 40 individuals bent on lynching the assailant.

"Enough is enough," said Estrosi. "It is time now that France rid itself of the rules of peace to annihilate the scourge of Islamo-fascism."

But the day of terror was far from over. In a second attack that took place two hours later, an armed man threatened people on the streets of Avignon – 190 kilometres from Nice – before he was fatally shot by police. Police believe he was a far-right extremist.

In Saudi Arabia, a security guard was stabbed and wounded outside the French consulate in Jeddah. In France, two other men were arrested. One was seized while carrying a knife near a church in Sartrouville, a Paris suburb, after his father reported he was about to carry out a Nice-style attack. 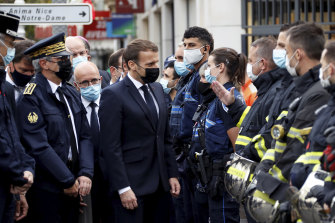 A second man of Afghan origin and "known to intelligence services" was arrested carrying a long blade as he tried to board a train in Lyon.

Speaking from the scene of the Nice attack, he said France had been targeted "over our values, for our taste for freedom, for the ability on our soil to have freedom of belief," before adding: "And I say it with lots of clarity again today: we will not give any ground."

It is not the first time a French church has been the target of terror.

In July 2016, two Islamists slit the throat of 85-year-old priest Jacques Hamel at a Mass at a Catholic church in Saint-Etienne-du-Rouvray, Normandy, northern France. The Islamic State later claimed responsibility. 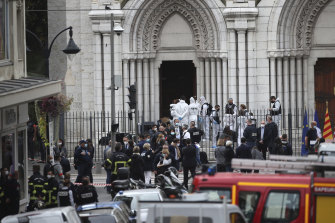 Police officers work at the Notre Dame church in Nice, southern France, after the attack.Credit:AP

Macron expressed special condolences to Catholics in France. The Church condemned what it called "an unspeakable attack" and warned: "Christians must not become symbols to be slaughtered".

French MPs, meanwhile, temporarily suspended a debate on the new national lockdown to observe a moment's silence in remembrance of those killed during the attack. Bells tolled in churches all around France in tribute to the victims.

Given the ongoing threat, France raised its terror alert to maximum level and Mr Macron announced that it would more than double the number of soldiers patrolling the streets from 3000 to 7000 – levels not seen since the 2015 Paris attacks.

They will protect key French sites, such as places of worship and schools.

The Islamist attacks follow fury across the Muslim world at Macron’s reaction to the murder of a schoolteacher two weeks ago.

Samuel Paty, a geography and history teacher, was beheaded outside his school in a Paris suburb after he showed cartoons of Mohammed to his class in a lesson on free speech.

Macron insisted that France's cherished tradition of freedom of expression, including mocking religion, must be protected, and promised a crackdown on Islamist extremism, including closing mosques and organisations accused of fomenting radicalism and violence.

That sparked condemnation from the leaders of several Muslim-majority nations, notably Turkish President Recep Tayyip Erdogan, who questioned Macron's mental health and likened treatment of Muslims in France to Jews under Nazism.

Turkey denounced the Nice attack and expressed "solidarity" with France, but added: "We call on the French leadership to avoid further inflammatory rhetoric against Muslims and focus, instead, on finding the perpetrators of this and other acts of violence."

Malaysia's former prime minister Mahathir Mohamad posted messages Twitter found incited violence and deleted. He wrote, just before the attack in Nice, that "Muslims had a right to kill millions of French people" because the latter had killed Muslims in centuries past.

Jean-Yves Le Drian, the French foreign minister, proffered "a message of peace to the Muslim world," saying France was "the country of tolerance". "Do not listen to the voices that want to stoke distrust," he said in Parliament. Condemnations of the attack poured in from elsewhere.

Prime Minister Scott Morrison vowed to stand with the people of France against “evil terror” and in defence of freedom.

British Prime Minister Boris Johnson said: "Our thoughts are with the victims and their families, and the UK stands steadfastly with France against terror and intolerance."

Donald Trump tweeted: "Our hearts are with the people of France. America stands with our oldest ally in this fight."

Pope Francis said: "I pray for the victims, for their families and for the beloved French people, so that they can react to evil with good."

France has been on high alert since the January 2015 massacre at the satirical magazine Charlie Hebdo, which marked the beginning of a wave of jihadist attacks. Tensions had already been high since the trial opened last month for 14 suspected accomplices.

The paper marked the start of the court proceedings by republishing the cartoons of Mohammed that angered millions of Muslims worldwide.

Abdallah Zekri, director general of the French Council of Muslim Worship, said: "I can only denounce as strongly as possible this act of cowardice against the innocent."

He called on French Muslims to cancel festivities to mark the Mawlid, or "the Prophet's Birthday", which ended on Friday, "in solidarity with the victims and their loved ones".