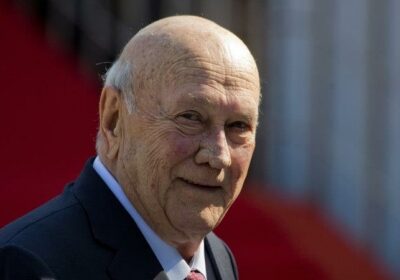 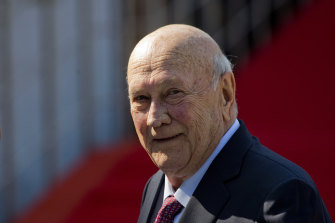 But de Klerk’s role in the transition to democracy remains highly contested nearly 30 years after the end of apartheid.

Many black people were angered by his failure to curb political violence in the turbulent years leading up to the 1994 multi-racial elections, while right-wing white Afrikaners, who had long ruled the country under de Klerk’s National Party, viewed him as a traitor to their cause of white supremacy.

“Former President FW de Klerk died peacefully at his home in Fresnaye earlier this morning following his struggle against mesothelioma cancer,” the FW de Klerk Foundation said in a statement on Thursday morning.

He had been diagnosed in March with mesothelioma, a cancer that affects the tissue lining the lungs.

“He is survived by his wife Elita, his children Jan and Susan and his grandchildren,” the foundation said, adding that the family would in due course make an announcement regarding funeral arrangements. 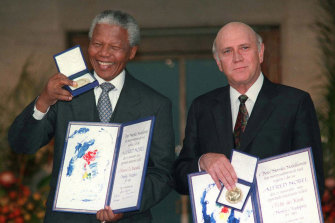 Reacting to news of his death, John Steenhuisen, leader of the Democratic Alliance (DA), South Africa’s second biggest party after the ANC, said de Klerk’s contribution to the country’s transition to democracy “cannot be overstated”.

Steenhuisen said de Klerk’s success in bringing the majority of white voters with him over the need to abolish apartheid “played a critical role in ensuring that the transition happened peacefully and that the 1994 elections … were embraced by all South Africans”.

The DA is the main rival of the ANC in national and local elections but has struggled to shed its image as a party of white privilege.

Julius Malema, who heads the Marxist Economic Freedom Fighters (EFF), the country’s third biggest political party, was much more critical, saying de Klerk should be referred to not as a “former president” but as a “former apartheid president”.

Though no longer active in South African politics, de Klerk prompted anger among supporters of then-president Jacob Zuma in 2016 when he accused them and their leader of seeking to advance their personal interests and of endangering the country’s constitutional democracy.

De Klerk again drew criticism last year when he told a national broadcaster that he did not believe apartheid was a crime against humanity, as declared by the United Nations.

The backlash triggered by his remarks forced de Klerk to withdraw from a virtual seminar with the American Bar Association (ABA) in the United States, where he had been due to speak on issues such as minority rights and racism.

“The allegation that de Klerk was involved in gross violations of human rights is baseless,” his foundation said in July 2020 when he withdrew from the event.