A Florida motorist who was clinging to the top of her vehicle in a canal was rescued from the water after a paraglider made an emergency landing over the weekend.

Christiano Piquet, a real estate broker in the Miami area, was piloting his paramotor-powered glider Sunday when he descended to get a better look at an alligator he had spotted from the air near Homestead, he told NBC Miami on Monday.

He noticed the motorist on the roof of her mostly submerged vehicle and decided to land, Piquet said.

The commotion the aircraft made as it buzzed above the swamplike waters and landed in a nearby field drew the attention of a neighbor, who threw the motorist a rope, the station reported. 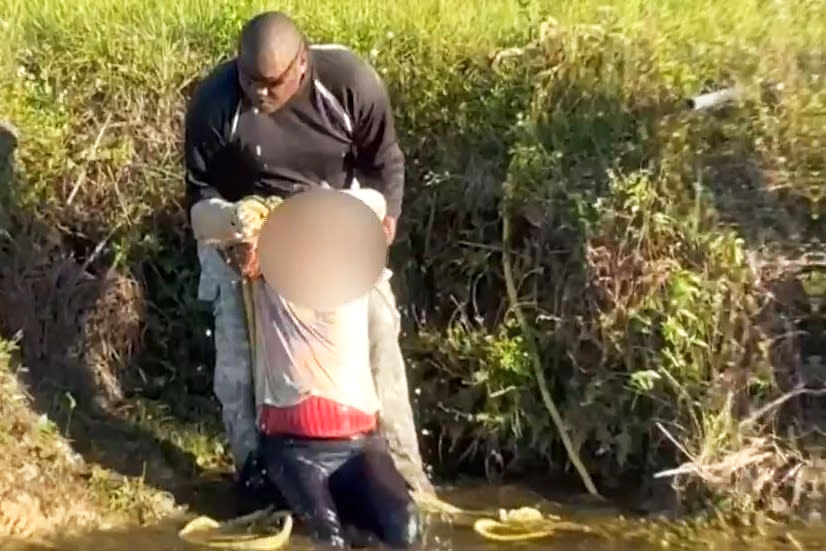 A camera mounted to the paraglider recorded the motorist using the rope to get to safety, with Piquet offering some guidance.

“We landed between power lines, uneven terrain,” Piquet told NBC Miami. “It was a terrible landing situation. And for some reason, I was calm, and I landed.”

After he got as close as he could to the woman, Piquet shouted, “We need help.”

The motorist was rushed to a hospital for treatment of unspecified injuries, the Miami-Dade Fire Rescue Department said. Her identity and condition were unavailable.

It is not clear how her vehicle ended up in the water.

Miami-Dade first responders were called to the canal in the 20400 block of SW 192 Street at 8:35 a.m. Sunday, department spokesperson Andrea Rudchenco said by email. The area is along the southwest edge of greater Miami and borders Everglades National Park.

As a precaution, a Miami-Dade Fire Rescue diver checked the area of the canal near the submerged vehicle for additional victims and found none, the spokesperson said.

Officials said more information is likely as an investigation seeks a cause.