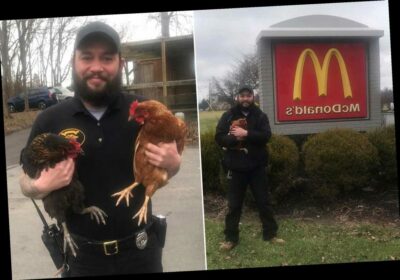 KFC set to revamp menu as battle with Popeyes heats up

McDonald’s looks to capitalize on chicken craze with new sandwiches

Ribbed for displeasure: ‘Nasty’ video shows how McDonald’s staple is made

Why did the chickens cross the road? To get a Big Mac, apparently.

A furious flock of hens “wreaked havoc” at a McDonald’s drive-thru in New Jersey — attacking customers and forcing cops to rush to the rescue, according to police.

The bloodthirsty birds ran a “fowl” of the law— chasing and “harassing” customers in Washington Township — Tuesday, prompting one spooked witness to call 911, cops said in a statement.

The hostile hens were ruthlessly pecking at the tires of patrons’ cars, the caller squawked to cops.

An animal control officer, identified as Robbie, wrangled the chickens and took them to Common Sense for Animals shelter, where they are now up for adoption.

“We cannot confirm at this time if they were targeting specific customers (with chicken nuggets and sandwiches in hand) or random customers,” the department wrote in a statement.