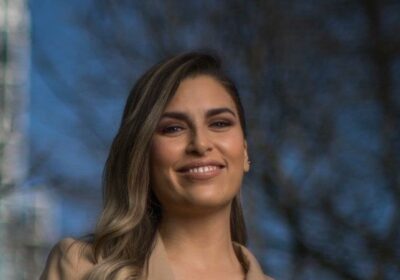 With those three little words, Sharnelle Vella began to carve out a rare space in the contentious age of COVID: a voice trusted by thousands every night to deliver them pandemic facts and figures. But it’s not on her professional platform, as state political reporter for Channel Seven, that Vella makes her biggest impact. It’s on Twitter, where her distillation of the endless stream of news and views has become a valued resource amid the cacophony of each day’s details. 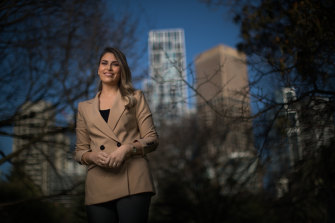 “I don’t know why I first wrote ‘Who want facts?’,” says Vella, whose Twitter following has quadrupled to nearly 60,000 in recent months. “I just thought, that’s what I’m going to do, pull these facts together in a thread and just fire them off.”

Vella is not alone in establishing herself as a voice separate to the fray.

In Victoria, the focus of so much angst, a bunch of voices have marked out this territory, and done it as a form of public service on top of their day jobs.

Vella does her daily summaries after work. Similarly, Dr Sandro Demaio, the CEO of VicHealth, uses social media to dispense medical expertise alongside tips for mental and physical health and even regular cooking chatter. On TikTok, Toby Rozario – a suit-and-tie conveyancer in his regular job – has developed a big following with his comical takes on the COVID headlines. From a city medical clinic, GP Vyom Sharma has turned his early warnings about the threat of the pandemic into a public profile that has seen him appear on Q&A and the Today show. And fresh off a plane from Canada in early 2020, Professor Nancy Baxter has deployed a straightforward manner to dive into the perils and pitfalls of our pandemic response.

They all try to take their newfound following in stride, while being conscious that the more people are paying attention, the more careful they need to be in their pronouncements.

For Vella, this surprising online fame even brought acclaim from the man at the centre of the pandemic response, Chief Health Officer Brett Sutton. In July, he tweeted: “OK. Facts. Official CHO prize for COVID (and Olympic) reporting.”

That quickly saw her dubbed the CHO-sen one. Vella, who was in Tokyo covering the Olympics at the time, was amazed. “I’ve never had an informal conversation with Brett Sutton, apart from asking him questions at a press conference,” she says.

“But it exploded when he tweeted that. And then people started calling me the ‘CHO-sen one’, which is how it exploded from there.

“Twitter has always been a bin fire. There was a time last year where I turned all my notifications off … because it was just so hard to digest, to do my job and to see the terrible things people were saying. I couldn’t cope with that mental space. Then this year, Twitter’s just being so nice to me. It’s been amazing.”

Vella, 33, was among the group of reporters who became familiar to Australians through the doom-watching of Premier Dan Andrews’ press conferences during the 112-day lockdown. Some reporters copped nasty abuse online. Vella copped some, though not the worst of it, and is philosophical about what inspired the vitriol.

“We didn’t consider the fact that the public had never seen the inner workings of a press conference,” she says. “We hadn’t factored into those press conferences, which became a beast on their own, that the public were seeing how we operate and it didn’t make any sense to them. We definitely made mistakes. I think we lost our way a little bit about what the public actually cared about.”

For Demaio, 36 and the CEO of Victoria’s health promotion body, wielding influence in a public health debate seems a natural fit. But the pandemic has elevated public health issues to a daily debate affecting every inch of our lives. With a PhD in epidemiology, he realised early on what a dramatic impact was in store.

“It became very clear this was going to have a major impact on our lives, on the way we work, on our physical health and on every aspect of modern life,” he says of Australia’s “corona-coaster”. 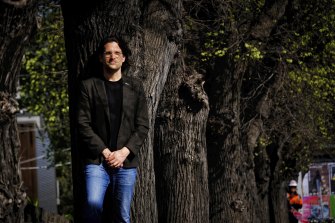 Through his VicHealth role he had access to real-time research into how Victorians were coping, and it gave him a different take on things like 2020’s “sourdough phenomenon” — the cliched lockdown cooking goal of choice for some. The research found people were indeed heading into the kitchen in droves. “But most people were doing it to save money. We saw a big increase in food insecurity.”

Demaio has used his social media profile to tend gently to his addled flock of followers. A typical morning missive offers wise counsel, as with this on Friday, when Victoria’s caseload topped 200. “Before we get pulled into a doom-scroll — try to get outside if you can,” he wrote. “Get a walk, some air, a moment with your household members or just yourself. Not easy, but important.”

Simple enough, but to his 36,000 followers his advice cuts through. On more complex questions, he brings an expert voice and an accessible manner.

“I understand the decisions that have been made, I understand how tough they are … so I feel that I have a unique responsibility to try to translate that for the public, to give people a bit of hope and perspective. And to acknowledge that some people are doing it really tough, much tougher than me.” 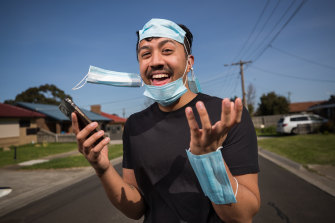 In his apartment in Wyndham Vale, Toby Rozario – who bills himself as “the COVID guy” on TikTok – brings no medical expertise to the table, but he does have a wry and winning sense of humour. Since he started posting snappy daily updates – a combination of news and his reactions to it – his videos have racked up 5.4 million views. One of his early COVID clips attracted 1.5 million pairs of eyeballs.

“That’s when I realised I had something,” he says.

“I just had fun. I just wanted to laugh at myself and help make people laugh as well. I think people want to escape … because everything is doom and gloom, whereas if people hop on TikTok they can have a laugh and a giggle.”

At the other end of the spectrum are the medical experts like Dr Vyom Sharma, who had a pre-pandemic profile on 3RRR. But it was when he started sounding the alarm about COVID that he became a go-to voice on traditional and social media. 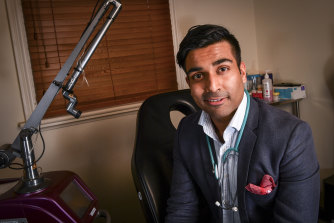 “There seemed to be enormous lethargy here … that for some reason we thought we were a bit special, that it wouldn’t happen here,” he says, describing how he started posing questions on any platform he could find.

“How many people is it affecting? How many people are dying? How is it spreading? Why can’t we test more? Why can’t we test faster? I was seen as someone who people trust [and] it just went from zero to 100. Medically speaking, I didn’t really have any public profile. To go from zero to that in just a couple of months was a bit of shock. It’s still something I’m adjusting to.” 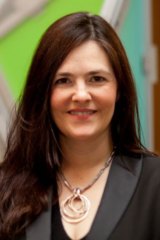 Professor Nancy Baxter had just moved to Australia from Canada to head Melbourne University’s School of Population and Global Health when COVID hit.

For Nancy Baxter, an epidemiologist and surgeon from Canada who moved to Melbourne early last year to head Melbourne University’s School of Population and Global Health, a new home in a new country came with a shocking adjustment. Soon after she arrived, the country went into lockdown. As a public health expert, she was horrified by the inadequate attention to protective gear in hospitals.

Her previously routine social media profile – “I was mainly talking about surgery and women in medicine” – was transformed as she raised the alarm. “I started tweeting about this when I saw those people in Milan. And what got me tweeting more was the PPE situation for the doctors here. That’s what got me active and got me talking to journalists, frankly. The approach on PPE was completely unbelievable.”

“Even in Canada, I’m known for being quite frank,” she laughs.

And on social media the public appreciated her expertise and down-to-earth honesty. One grim day last week, she tweeted: “I really feel like crying right now and I don’t think I am alone. Please send cute pictures of pets, kids, or anything else you think could cheer us up.”

Many obliged, a sign of the chord she has struck.

“I did have an internal debate about whether I should continue to do this,” Baxter says of her public commentary. “But I think what I do very well is take the scientific stuff and make it digestible. I think that’s what people need.”

The pandemic has highlighted many such needs unique to the times. As Demaio has learned, a simple urge to take a walk in the sun can do wonders. And a shared lockdown burden – even if shared through apps and phones and laptops – is one that can seem easier to carry.

Today, for instance, Demaio will join hundreds of his followers in a Sunday morning online pancake cook-up – an idea Twitter has christened #SolidarityPancakes. When he’s done, Demaio will do what he has done every Sunday recently: deliver those pancakes to his 98-year-old grandmother, who lives nearby.

If he forgets, “I hear about it”, he says of his gran, who uses Instagram on her iPad. As they have for many, technology and adversity have combined to make a troubled world feel a little smaller and a little easier.