Fishing trawlers, a no-show submarine and mutiny: the full story of a historic drug haul 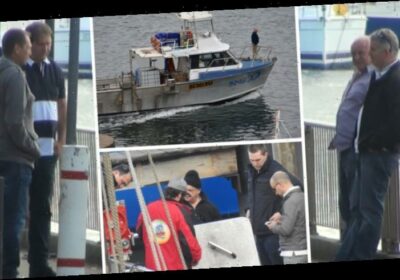 “You’ve got to turn around and head back to Tassie. Everything’s been called off,” a frustrated Joe Pirrello told the crew of the Saxon Progress fishing trawler on March 14, 2016, as it was powering towards international waters.

Pirrello made the phone call after learning that the 610 kilograms of cocaine they were planning to collect from South American smugglers on a yacht had been intercepted near Tahiti by the French Navy. 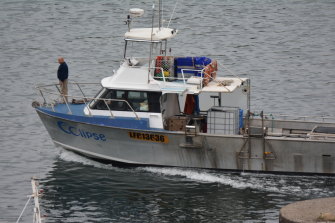 Joe Pirrello, pictured returning to Sydney on the bow of the Eclipse after after a failed import attempt, was a mainstay of the syndicate. Credit:Police

This failed drug importation was the third of five smuggling attempts by the ambitious NSW-based syndicate over two years. Only on the fifth attempt did they succeed in bringing drugs to Australia. But the victory was short-lived, as a massive police operation culminated with mass arrests and a 500-kilogram cocaine haul seized when it was brought into the Hawkesbury River on Christmas Day 2016.

The end result was 18 related convictions, with combined prison sentences of 250 years. After the final sentence was handed down last week, the full story, starting with the beginnings of the syndicate back in mid-2014, can be told at last.

The dramatic saga involved mutiny at sea, a mysterious “submarine”, the French Navy and a cast of colourful characters. The Herald has obtained a range of surveillance photos and telephone intercepts gathered by police during their 2½-year investigation.

The tale begins where it ended: with Joe D’Agostino, a busy crook who was sentenced last week to 30 years in prison with a non-parole period of 20 years for his role in the syndicate. In 2014, financially troubled and looking for money-making schemes, he assembled a crew. 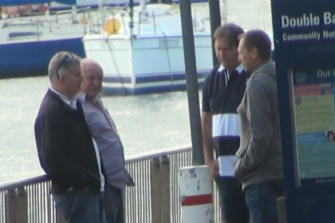 The four men leading the first conspiracy were monitored as they met at the skiff club in Double Bay to begin plotting. Credit:Police

A key figure would be Pirrello, D’Agostino’s cousin and a successful fishing entrepreneur who hit the headlines not long before when a super trawler he brought to Australia was sensationally banned by the federal government. Pirrello, who would end up as the mainstay of the syndicate leadership, entered the scene as the man with resources and access to boats.

D’Agostino’s brother, Frank, was brought in. And the fourth senior member in the original syndicate was Jose ‘Pepe’ Garcia, well-known to police as a highly competent and well-connected criminal.

The men were first recorded together at a meeting at the 18 Footers League skiff club in Double Bay in August 2014. On the agenda was a proposed importation that would bring in 32 kilograms of heroin from Fiji in the coming months. Through international contacts, a supplier from Laos had been secured.

But from the get go, authorities were watching the nascent syndicate. A joint effort by the Australian Federal Police and NSW Police had been launched following a tip-off to the NSW drug squad.

By the time they were ready to execute the importation from Fiji in January 2015, police had infiltrated the syndicate with an undercover operative. This man, known as Aaron, was the underling sent to pick up the cargo and bring it back on a charter boat.

Fijian police were used to disrupt the attempted import, making two arrests and seizing the heroin.

Following this failure, Garcia, the sharpest criminal mind in the crew, was wary. He was justifiably suspicious of Aaron, questioning why he had not been arrested.

Disappointed with the outcome, the syndicate went quiet. But not for long, soon regrouping for another scheme. 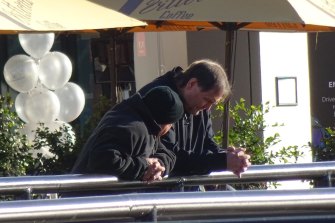 “It happened at the end of every conspiracy that didn’t go to plan: when they got back and looked like they might have been caught, everyone just sort of scattered,” recalls federal police Senior Constable Joel Rivers, a case officer in the investigation.

“And then after a couple of weeks, they’d start coming together and making contact again.”

The next conspiracy involved an elaborate scheme to collect cocaine from what they believed to be a submarine sent by a Colombian cartel. In late May 2015, the crew would send the small and ill-suited Eclipse fishing vessel out to a rendezvous point in international waters and, according to the plan, bring the cargo aboard with barrels on a rope line. 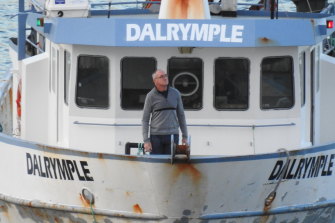 John Tobin, a friend of the D’Agostino brothers and former Sydney Roosters player, was monitored aboard the Dalrymple. Credit:Police

As the conspiracy was in motion, Garcia got himself arrested over a separate scheme in which he picked up two kilograms of methylamphetamine from an international contact. The arrest, carried out in a way that would avoid exposing the larger surveillance operation, didn’t discourage Garcia’s fellow conspirators.

Unfortunately, the submarine never showed up. Exactly what happened isn’t known. Pirrello’s nephews – who were on board the Eclipse and were acquitted for their role in the conspiracy – claimed they entered the wrong co-ordinates in the GPS to foil the plot. But the syndicate may also have been deceived by their Colombian sources, who were difficult to contact. Investigators laugh at the idea that a cartel would have a submersible vessel advanced enough to cross the Pacific Ocean.

“I don’t think a great deal of thought went into it,” says Rivers.

The third conspiracy, to bring in 610 kilograms of cocaine from South America, was planned between September 2015 and March 2016. The well-organised attempt may have succeeded if it weren’t for an unlucky intervention from the French Navy.

The vessel to be used for the Australian pick-up was the Saxon Progress, a trawler based in Hobart.

As the plot gathered pace, D’Agostino was on the run – fleeing police over separate drug supply charges – and his brother Frank took on a more active role to represent their interests. Another man, former Sydney Roosters player John Tobin, a D’Agostino associate, was also getting involved. 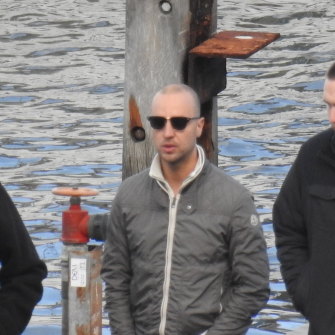 A foreign contact known as “the inspector” came to discuss the syndicate’s operations at Sydney Fish Market. Credit:Police

However, days into the voyage, the syndicate learnt the shipment had been intercepted in French Polynesia. The Panama-flagged yacht Vague a L’ame had been boarded and the cocaine seized.

The third conspiracy also introduced a major new player: Jonathan Cooper. A security guard who hadn’t had any major run-ins with the law, Cooper was viewed as a highly competent criminal who had reliable international connections.

At this point, a mysterious foreign contact, known to the syndicate as “the inspector”, came to meet the men and discuss their operations. He was pictured at a meeting at the Sydney Fish Market before leaving the country and disappearing in south-east Asia.

Following the latest failure, Pirrello was in deep and seeking a return on the money he had poured into three ill-fated expeditions. He had not started as an experienced criminal but was now desperate for further opportunities.

He had a proposal, conveyed through Frank D’Agostino (whose brother had by now been arrested for his other offences), and needed people who had the means to get the job done. After a meeting at Steyne Park in Double Bay, Pirrello and fishing associate Simon Spero agreed to the venture separately to another developing plot with Cooper and his contacts.

The conspiracy with Mohr – who had travelled the world to meet contacts and put together a very promising plan – would fall apart because of a mutiny on board the Dalrymple, newly bought by Pirrello.

Three crew members had been told the voyage was about water testing. Heading out towards Fiji in November 2016, the innocent captain was only informed of the truth after the boat passed Lord Howe Island.

“He lost his mind,” says Rivers. The skipper called Pirrello – berating him and refusing to participate in the criminal conspiracy – and locked himself in part of the boat with the other two. 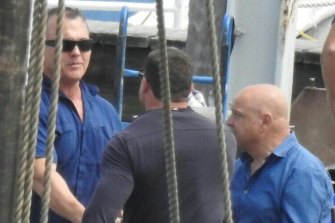 After some fraught deliberations, the dissenters were dropped off on Lord Howe Island, where they were put up in an expensive hotel and flown back to Australia. The rest of the crew continued but the attempt had fallen apart. When they arrived at the co-ordinates, the cargo was nowhere to be found. The plotters concluded that, delayed by the mutiny, they had missed their window and the drugs had been ripped.

The next month, the separate plan with Cooper was ready to go. The scheme, to collect 500 kilograms of cocaine from a Chilean vessel, was the syndicate’s final effort.

The Dalrymple left its berth at the Sydney Fish Market on December 3 and linked up with a recently purchased inflatable boat off the coast north of Sydney. The inflatable was put on board the larger vessel, which headed for Fiji.

The voyage went largely to plan. While the boat they were meeting ran into a hurricane, forcing a stop for repairs and change of co-ordinates, eventually the pick-up was completed.

In an intercepted phone call on December 17, crew member Stuart Ayrton confirmed the result to Pirrello.

“We’re on our way back now,” Ayrton reported.

Pirrello, who was there in the first iteration of the syndicate back in mid-2014, had finally succeeded in bringing drugs to Australia. Unfortunately for him, police – who had been listening and watching the entire time, discreetly disrupting the syndicate’s plans from the shadows – were getting ready to strike.

In their long, resource-intensive investigation since mid-2014, investigators had listened in on 4000 relevant phone calls between syndicate members and gathered 200 recordings using listening devices and their undercover operative. The syndicate had used encrypted BlackBerry phones and taken other counter-surveillance precautions but these steps wouldn’t be enough to thwart authorities. 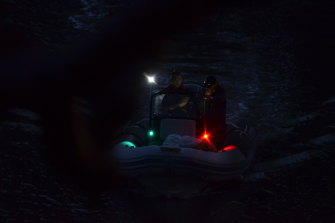 An inflatable boat, pictured leaving Australia on a night in early December 2016, was seized with 500kg of cocaine on board. Credit:Police

As Spero, on board the inflatable boat, cruised along the Hawkesbury River towards Brooklyn under the cover of darkness on December 25, with his prized cargo, Pirrello was waiting to collect. And that’s when the police made their move.

Arresting the men and seizing the cocaine, the major operation involving more than 200 officers would also swoop on other syndicate members in Sydney and across the country. In total, 20 people faced charges in relation to the syndicate’s activities.

All up, it was one of the largest drug seizures in Australian history. For investigators, the resolution was a major victory and cause for relief. All Pirrello could do, as he was taken into custody, was sit in stunned silence.