The first meteor shower of the year is already here, as the first week of 2023 will offer the peak of the Quadrantids.

The Quadrantids meteor shower will peak Tuesday night into Wednesday morning, and depending on weather conditions, could give sky gazers a dazzling display of space rocks streaking across the night sky.

Active from Dec. 26, 2022 to Jan. 16, 2023, the Quadrantids typically peaks at the beginning of January. It has the potential to be the strongest meteor shower of the year, according to the American Meteor Society. At its best, NASA says peak activity could produce around 80 meteors per hour at a blazing 91,800 miles per hour.

However, it may be hard to capture due to its short peak time and often poor weather conditions in January, the AMS says. The moon will also play a factor in spotting the shower since a full moon will appear later this week, which allows “just a small window of opportunity to view this display under dark skies.”

Still, people in the U.S. and Northern Hemisphere will have a chance to catch a glimpse of one of the 12 major meteor showers of 2023. The shower is known for producing bright fireball meteors that have larger explosions of light and color than the average meteor, according to NASA.

The meteor shower is a rare kind: NASA adds it comes from an asteroid (composed of rock) as opposed to a comet (composed of ice and dust). It originates from asteroid 2003 EH1, which takes 5.52 years to orbit the sun. 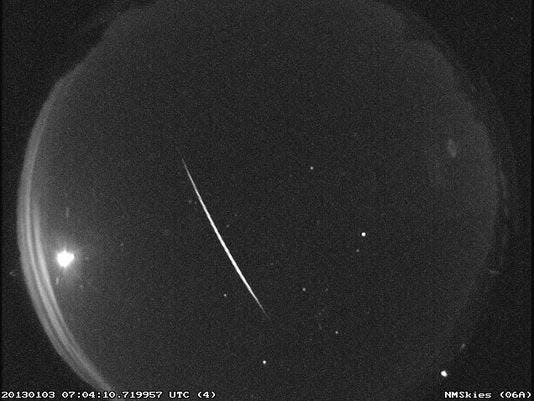 ‘Don’t worry about me’: NASA Mars InSight lander signs off with poignant message

What’s everyone talking about?:Sign up for our trending newsletter to get the latest news of the day

When does Quadrantids meteor shower peak? How to wat

The Quadrantids meteor shower will peak the night of Jan. 3 through the morning of Jan. 4. What makes this meteor shower unique is that its one of the few that has a peak lasting only a few hours, as opposed to others that have peaks ranging a few days, NASA says.

The peak is expected to occur around 10:40 p.m. through 1:40 a.m. ET, with the later time favoring the chances of visibility on the East Coast, according to the AMS. The duration of strong activity could last around six hours.

To catch a glimpse of the shower, it is advised to go to an area that isn’t affected by light pollution during the night or predawn hours of the peak. NASA says it’s important to first let your eyes adjust to the dark, which takes less than 30 minutes.

Once adjusted, the AMS says to face northeast and look about halfway up to the sky. It is recommended to sit in a chair or lie down as opposed to standing and looking up for the most comfortable experience. The AMS suggests giving yourself at least an hour to watch to avoid any lulls in activity.