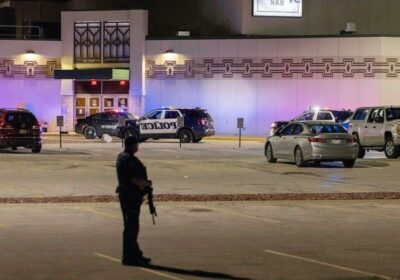 A worker who had been fired from the Duck Creek Kitchen + Bar in Wisconsin returned to the restaurant where he allegedly killed two employees and wounded a third, authorities said.

About 50 people were eating in the restaurant in Ashwaubenon, near Green Bay, at the time of Saturday evening’s shooting, Brown County Sheriff Todd Delain said at a news conference Monday.

The restaurant is located inside a Radisson Hotel connected to the Oneida Casino. Several hundred people were within the complex at the time, including hotel guests, restaurant patrons, casino guests and people at a wedding in the banquet hall, Delain said.

After the suspect walked into the Duck Creek Kitchen + Bar, he headed toward a waiter station — which is open to the public — and allegedly shot and killed two employees at close range with a 9mm handgun, Delain said.

The slain employees were identified as Ian Simpson, 32, and Jacob Bartel, 35, Delain said.

The suspect then left the restaurant and went outside the complex where he allegedly shot a third restaurant employee, 28-year-old Daniel Mulligan, Delain said.

Mulligan is in serious but stable condition at a Milwaukee hospital, Delain said.

The lone suspect was shot and killed by police outside of the complex, near a parking structure, and pronounced dead at the scene, Delain said.

The suspect was fired from the restaurant earlier this year and was forbidden from entering the property, Delain said.

“This is not a random act,” Delain said. “We believe it was targeted.”

A specific motive is not clear, Delain said.

Oneida Nation said in a statement, “Our heartfelt condolences are extended to all the loved ones of the victims. We are reaching out to provide all necessary services of counseling for all our employees.”