A man who fathered ‘at least’ six children with his own daughter has been given a 40-year extended sentence.

The defendant, who cannot be named for legal reasons, controlled the life of his victim for more than two decades, emotionally manipulating her and systematically raping her.

Her went on to dominate and repeatedly rape one of the children he had with his daughter. 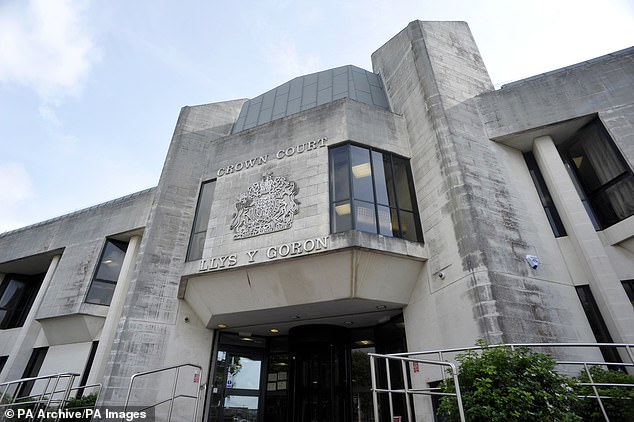 The man, who cannot be named for legal reasons, was jailed for 40 years by Swansea Crown Court, pictured. He was warned it would be at least 22 years before he could apply for parole, which would only be granted if he was no longer a threat to society

He also repeatedly abused and raped another of his daughters during her teenage years – and arranged for another man to rape her.

A judge told him what he had done to his family ‘plumbed the depths of depravity’, and his actions had been ‘utterly wicked’.

The defendant, who lives in south west Wales but who cannot be named to protect the lifelong anonymity afforded to his victims, had denied 36 counts of rape and one of sexual assault but was convicted on all counts last week following a trial at Swansea Crown Court.

He returned to the dock on Friday to be sentenced for his crimes.

The defendant began abusing and raping his first victim when she was aged just 14 – within months she was pregnant with his first child.

He controlled every aspect of her life, even invoking elements of witchcraft and creating a ‘fake mystic’ who would send his daughter messages telling her to perform sex acts with her dad.

The female went through nine pregnancies during her years of abuse, with six children resulting – DNA tests showed all were fathered by the defendant.

He also raped and abused another daughter during her teenage years, but she subsequently left home and got away from him. He also arranged for a man he knew to rape her in his flat – and stood in the bedroom watching while it happened.

The defendant would go on to repeatedly rape one of the girls he had fathered with his first victim, again using mysticism and witchcraft to control her. 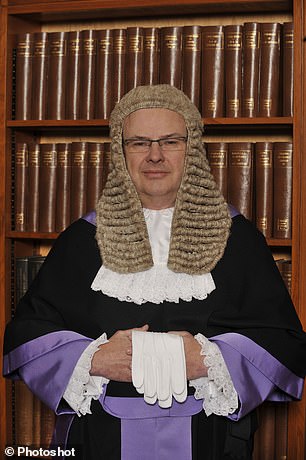 Judge Paul Thomas, pictured, said the man carried out a ‘horrific campaign’ of manipulation and rape against his daughters

But during his trial he claimed both the daughter he had fathered six children with and her daughter had blackmailed him into having sexual relationships with them. He said he had no choice but to go along with what they wanted, and said he still loved his wife.

He claimed the other daughter he had raped as a teenager was simply making up the allegations against him in the hopes of getting compensation.

But the jury did not believe him.

At the sentencing hearing barrister Craig Jones read impact statements from two of the defendant’s victims.

The first victim, the daughter the man had fathered children with, said he had tricked, fooled and abused her to such an extent that she thought what was going on was ‘a normal upbringing’.

She said she had never learned what true was, and ‘my life has been a big secret’.

She said: ‘It wasn’t until May this year I realised what a monster he was’.

The woman added that as a result of the truth coming out her children had been taken off her and ‘My children were the only things I loved and was proud of – because of him I have lost them’.

In the second statement read to court another of the defendant’s daughters said she had been ‘made to feel small in a big world’ and abused by someone who should have been protecting her.

She said she had kept the abuse secret for many years but now ‘Telling the truth about what happened has finally set me free from him’.

Judge Paul Thomas QC told the defendant he had carried out a ‘horrific campaign’ of manipulation and rapes against his own daughters.

He said: ‘What you did to your family over a period of around 20 years plumbed the depths of depravity. You behaviour was utterly wicked. You have left your victims, your daughters, with their lives in pieces… You sexually abused and raped three of your daughters.’

He told the defendant he had ‘cynically and mercilessly’ taken advantage of the females for his own sexual gratification.

The judge said the defendant had consigned the daughter he fathered children with to a life which amounted to a ‘form of sexual slavery’.

Judge Thomas said the man had then denied all the offences, and tried to paint himself as the victim of the piece.

He told him: ‘You are as cowardly as you are wicked.’

The defendant was made the subject of a 40-year extended sentence comprising 33 years in prison, and seven years on licence. He will have to serve 22 years before he can apply for parole but will only be released if the authorities consider he is no longer a danger. He will be a registered sex offender for the rest of his life.

The man who the defendant arranged to rape one of his daughters had previously pleaded guilty, and awaits sentence.

The Crown Prosecution Service described the abuse as ‘sickening’.

Hayley Fackrell, from the CPS, said: ‘These sickening acts of abuse were carried out by a person that was supposed to protect and care for the victims, but instead he systematically controlled their lives, grooming them for his sexual gratification.’