Far-right and Antifa turn progressive Portland into a battleground Portland: Hundreds of far-right protesters and anti-fascist counter-demonstrators swarmed downtown Portland, Oregon, at the weekend for a long-hyped rally that attracted President Donald Trump's attention and resulted in at least 13 arrests.

Police seized metal poles, bear spray and other weapons and closed bridges and streets to try to keep the rival groups apart. 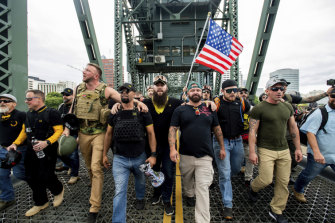 Members of the Proud Boys and other right-wing demonstrators march across the Hawthorne Bridge in Portland, Oregon. The group includes organiser Joe Biggs, in green hat, and Proud Boys chairman Enrique Tarrio, holding a megaphone. Credit:AP

President Donald Trump weighed in on the tense situation in Portland on Saturday morning, calling out the anti-fascist group known as Antifa on Twitter and suggesting support for labeling it a terror organisation. He did not mention any of the right-wing groups, although both they and Antifa have a history of using violence against their opponents.

Many of the far-right demonstrators support a bill sponsored by Republican senators Bill Cassidy and Ted Cruz urging Congress to identify Antifa, short for anti-fascists, as a domestic terrorist group.

The rally was the latest in a series of vocal and at times violent political demonstrations in the progressive north-west city where protest is a rich tradition but where residents have grown increasingly weary of extremist sabre-rattling on their streets.

For weeks, police and local politicians have been urging protesters not to show up at all and those who inevitably arrive to be peaceful. Officials and residents feared a melee like one in the city June 29, when a conservative writer was assaulted by black-clad protesters. 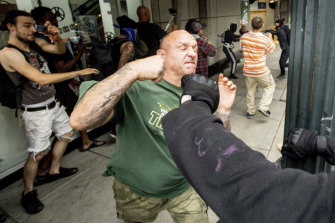 A man tussles with protesters against right-wing demonstrators in Portland on Saturday.Credit:AP

On Saturday, a few confrontations broke out in the park as the rally began, but the far-right groups eventually moved behind a police line and were separated from the counterprotesters by a wide gap that officers worked aggressively to maintain.

Later, many of the right-wing protesters left the area and crossed the nearby Hawthorne Bridge to the east side of the city. But some stayed on the west side, and Antifa members followed them through the downtown streets shouting at them to leave the city. At least two of those walking with the militia members appeared to have been hit with white substances resembling milkshakes.

The Portland Police Department said at least 13 people were arrested. Officers intervened in occasional skirmishes at or near the park and seized flagpoles and shields from both sides.

The rally itself was largely uneventful. But more fights broke out after the groups had dispersed and roved the downtown streets in smaller packs, with tense and sometimes bloody exchanges flaring up between demonstrators. 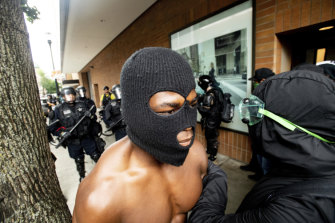 A protester against right-wing demonstrators walks away from a police line following in Portland.Credit:AP

By late afternoon, the police declared the clashes a civil disturbance and began to clear the area around Southwest Park Avenue and Southwest Morrison Street, where a throng of protesters and bystanders had gathered.

A White House spokesman did not respond to an email seeking an explanation of Trump's tweet, as well as why he chose to target Antifa and not others in the clashes.

But Trump has repeatedly sought to highlight incidents involving Antifa and has accused the news media of not giving the group's tactics enough coverage. He has often highlighted them amid criticism of the rhetoric used by white nationalists.

Which groups are demonstrating?

Far-right groups congregated at the south end of the park Saturday morning. Some wore body armor and helmets, and at least one had a visible pocketknife and pepper spray, which he said were to be used "as a last resort." 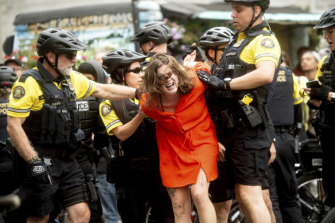 Police officers detain a protester against right-wing demonstrators in Portland.Credit:AP

Among the other far-right groups were the Proud Boys, an all-male group whose members sometimes share racist or misogynist ideas, and who have fought with protesters before.

The most vocal promoter of the rally was Joe Biggs, who used to work for conservative conspiracy show Infowars. Biggs said he had organised the rally in response to the beating of conservative writer Andy Ngo in the clashes in June.

Many have blamed Antifa for the beating, which was captured on video. No one has been charged in connection with the assault, which police are continuing to investigate.

Rose City Antifa, which is based in Portland and is one of the oldest and most organised Antifa groups, has encouraged its followers to attend the rally.

Portland police said they would use 'whatever means necessary' to curb violence.

"To those people planning to come and inflict violence in our city: We don't want you here," Ted Wheeler, the mayor, said in a recorded admonishment this month. He warned that police would use "whatever means necessary" to uphold the law.

At an evening news conference Wheeler tied the demonstrations to "a rising white nationalist movement" and a growing sense of fear in the country.

"We're certainly seeing that play out," he said. "Portland being a very progressive community is always going to be at or near ground zero of this battle."

The Police and the mayor have repeatedly said they would not target any political group but rather seek to stop violence perpetrated by people of any viewpoint.

Joey Gibson, the leader of another conservative group, Patriot Prayer, which has organised similar rallies in the past, turned himself in to the Portland police Friday after being charged with rioting in another clash in May. He appeared at the rally Saturday. 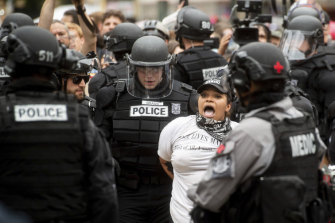 Two members of the Proud Boys are on trial in New York after being charged with attempted assault in an attack on people believed to be members of Antifa. The Proud Boys also hosted a free speech rally in Washington, D.C., in June, during which Antifa protesters clashed with police and some conservative demonstrators.

What would it mean to call Antifa a domestic terrorist organisation?

The Antifa bill from Cassidy and Cruz is largely symbolic; there is no government list designating groups as domestic terrorist organisations, and the bill does not call on any federal agency to create one. It says simply that groups operating "under the banner of Antifa" should be labelled domestic terrorists.

The bill also asks the federal government to "redouble its efforts" to oppose domestic terrorism, including by white supremacists, and calls on the Senate to express "the need for the peaceful communication of varied ideas in the United States."

The massacre in El Paso, Texas, this month, in which a gunman killed 22 people, brought renewed calls for the creation of a law specifically outlawing domestic terrorism after police said the gunman had written a racist, anti-Latino manifesto.

While there is a federal crime outlawing "acts of terrorism transcending national boundaries," there is no crime for domestic terrorism. People who are identified by police as domestic terrorists can be prosecuted for violating state or federal laws.

Why does this keep happening in Portland?

Now used to the mayhem, residents and event planners in the city have prepared accordingly. A 5K run was moved from one side of the Willamette River to the other to avoid the protest, and police posted a map on Twitter identifying a dozen other events that they said would not be affected by the demonstration.

Rallies are so common in Portland in part because it is a hub for anarchists and radical political groups, drawn to the city's reputation of upholding the rights to free speech and protest.

"We're proud of our defense of these core American values," Wheeler, the mayor, said in the video earlier this month. He repeatedly stressed, however, that the city did not want groups coming from out of town to stoke tensions.