Family penniless at Christmas after builder ‘disappears with £5,500’ Family are left penniless at Christmas after rogue builder ‘disappears with £5,500 and leaves home in a shocking state halfway through job’

A family face a penniless Christmas after they claim a builder disappeared with £5,500 plunging them into debt and leaving their home in a shocking state.

Joanna Sterling, 47, said she had to pay a second builder to complete her extension on her home in Whitely Bay, North Tyneside after the first one allegedly walked out without giving her the money back.

Now Joanna and her two young children, Kai, 11, and Lexi, nine, face a cash-strapped Christmas in ‘a house that doesn’t feel like a home’.

She said: ‘I’ve cried every day. I was numb every day for weeks after and I’m now on anti-depressants. 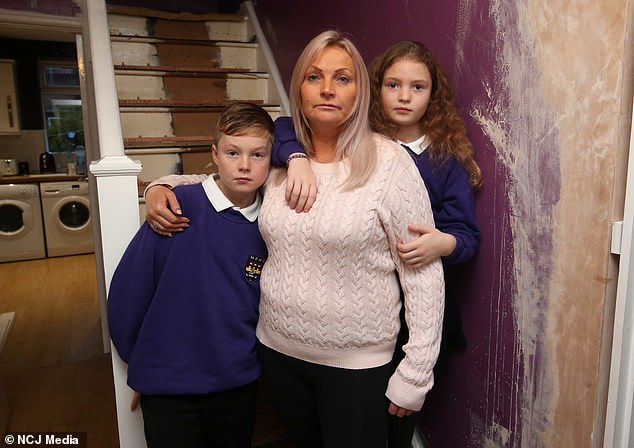 Joanna Sterling (pictured with her children Kai, 11, and Lexi, nine) faces a cash-strapped Christmas after a builder took £5,500 from her but didn’t finish work on her extension

‘The house isn’t going to feel like a home this Christmas. The kids won’t be able to have as much as they normally have.

‘My kids have seen me break my heart over this. They say “I wish the builder didn’t steal your money mumma”.’

After living in her house for nine years, Joanna decided to have a porch and downstairs bathroom extension fitted.

Although she knew that money would be tight, she pushed ahead with the plan to create the house of her dreams.

In May, Joanna contacted a local builder who had been recommended by friends and gave him a £2,000 deposit to buy materials with the agreement the work would be done by late June.

In the beginning everything was going well and Joanna said they ‘got on well’ so the following month Joanna gave the builder £5,500 to buy materials, but they never arrived.

She then became increasingly concerned when he would not turn up to work and pushed the construction past the agreed due date. 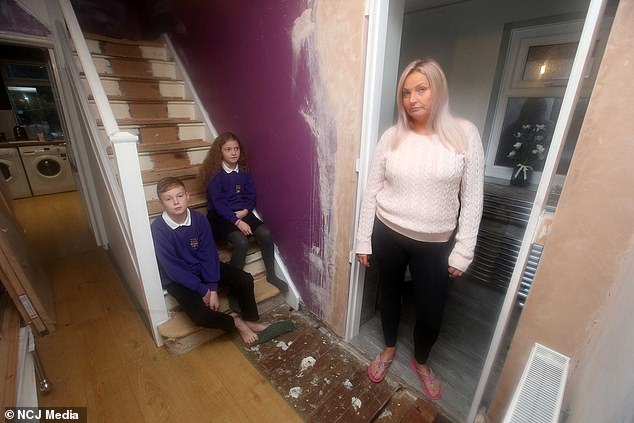 Joanna said she paid a second builder to carry on the work, but she still cannot afford to have the whole job done

Joanna said: ‘We had a few arguments. I’m sorry but when it got to six weeks past the due date and I couldn’t see any evidence of work I said “you’re taking the mick and this is not good enough”.’

In August, Joanna claims the builder stopped turning up at the house and despite persistent calls and emails, he did not reimburse her the money to buy the materials.

Joanna said she was left living in a house with exposed pipes and bare walls.

She claims she had to pay a second builder to carry on the work, but she still cannot afford to have the whole job done.

‘I’m completely broke. I’ve had to max out my credit cards because I’ve had to buy everything again.

‘I’ve had to borrow £200 from someone and money from my family for my children this Christmas. The house isn’t going to feel like a home this Christmas.’