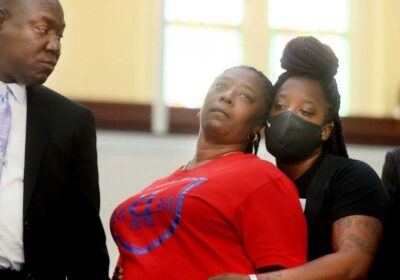 A Black man on his way to visit his niece and nephew was fatally shot by a security guard in Memphis, Tennessee, Saturday evening over an argument about loud music, according to an arrest affidavit obtained by ABC News.

Alvin Motley Jr., who was described by his family at a press conference Tuesday as disabled, was pronounced dead at the scene. He was at a Kroger fuel center with his girlfriend, Pia Foster, when he and the security guard, Gregory Livingston, got into a verbal altercation over the volume of music coming from their car, according to police.

Ben Crump, a civil rights attorney representing the Motley family, said at a press conference Tuesday that this case is similar to that of Jordan Davis’, a 17-year-old Black teenager who was shot and killed in 2012 by a man who complained about Davis’ loud music.

“I don’t care how loud you think it is. You do not have a right to kill a young black man for playing music,” Crump said Tuesday. “Jordan was one too many. Alvin is by far too many.”

Foster, who witnessed the shooting, told authorities she saw Motley walking toward Livingston after the initial altercation and asked him, “Let’s talk like men,” according to the affidavit. The surveillance footage, which has not been released to the public, showed Motley approaching Livingston while holding a beer can and a lit cigarette, according to the affidavit. Livingston drew his weapon and shot Motley in the chest.

When officers arrived, Livingston admitted to shooting Motley, according to the affidavit.

Livingston has been charged with second-degree murder and is currently being held in the Shelby County Jail on a $1.8 million bond. He is scheduled to appear in court on Aug.16.

“I forgive the man, but I want him punished to the fullest extent. I want him to live as long as I live so he can think about what I have to think about forever,” Alvin Motley Sr., Motley’s father, said during the press conference. “I want justice for my son.”

Motley Sr. said his son was diagnosed with Marfan syndrome, which the Mayo Clinic describes as a “disorder that affects connective tissue,” as a child and is legally blind and therefore cannot drive.

According to public records obtained from the Tennessee Department of Commerce & Insurance, Livingston was not a licensed security guard at the time of the shooting. No one can work as an armed guard without proper registration, which Livingston did not have, said Kevin Walters, the communications director at the TDCI.

Crump has also called on Kroger to take responsibility for what happened at its gas station.

“Hire security companies that won’t profile Black people and respect Black customers. Use your influence to make this right. Don’t try to sweep it under the rug,” Crump said Tuesday.

Kroger said in a statement that the incident involved a third-party security service contractor and asked the third-party contractors to honor Kroger’s values of diversity and inclusion.

Allied Universal, the security company that was employing Livingston at the time of the shooting, did not respond to ABC News’ request for comment.

“This was cold-blooded murder,” Turner said at the press conference. “We will never forget the senseless murder that has taken place in this community.”