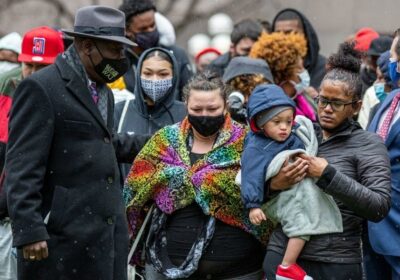 As snow flurries swirled under a gray April sky, the families of George Floyd, Daunte Wright, and other Black people who’ve lost their lives in police-involved killings held an emotional press conference in Minneapolis, Minnesota.

Civil rights attorney Ben Crump and a few dozen relatives, activists, community members and media assembled in the cold Tuesday outside the Hennepin County Courthouse. As loved ones spoke one by one, there were tears, prayers, anger and demands for justice. Often, remarks were followed by anguished cries of “Say his name!” and “Black Lives Matter!”

During week three of the trial of Derek Chauvin, the ex-Minneapolis police officer accused in the May 2020 death of George Floyd, the region was jolted anew by the fatal police shooting of 20-year-old Daunte Wright. It happened on Sunday, April 11 in Brooklyn Center, a suburb of Minneapolis.

Wright was stopped by police, reportedly for a minor traffic violation. During the process of being detained, bodycam footage showed the young father of a baby boy being shot as he tried to get away.

“If ever there was a time when nobody in America should be killed by police,” it is during one of the “impactful” trials in the history of America, Crump told the crowd. He and co-counsel Jeff Storms have been retained by Wright’s family.

Katie Wright said her son called as the incident unfolded, and sounded afraid. As she tried to calm him, she heard scuffling. A female friend who was in the car with Wright later broke the news to his mom that her son was dead, sharing a cell phone photo. “I have had no explanation since then,” she said.

Police officials said publicly that Kim Potter, a law enforcement veteran with 26 years on the force, meant to reach for her taser, but accidentally fired her gun instead. She has since resigned, along with the city’s police chief, among others.

There have been several days of protests and unrest in Brooklyn Center, where the young Black mayor, Mike Elliott, has promised a thorough investigation.

“We are unified. We are standing in solidarity,” said Toshira Garraway, founder of Families Supporting Families Against Police Violence, a Minnesota advocacy group. “Enough is enough and we’re standing up,” she said during the press conference.

Also attending to show solidarity was Deborah Watts, a relative of Emmett Till. The Chicago teen’s gruesome, racially motivated 1955 murder in Mississippi is not relegated to the past, she said. “We are tired and exhausted by the terrorism against our families across this country.”

This week, jurors are now hearing from the defense team for Chauvin, who is facing second and third degree murder and manslaughter charges.

Floyd, 46, died in police custody on May 25, 2020. Viral cell phone video shows Chauvin kneeling on Floyd’s neck for over nine minutes. Floyd, who was handcuffed and lying on the ground, said, “I can’t breathe,” and called out for his mother as Chauvin, 45, kept his hands in his pockets and did not render assistance. He has pled not guilty.

Floyd’s grisly death sparked Black Lives Matter protests around the country and world. Crump, along with co-counsel Antonio Romanucci, L. Chris Stewart and Chris Storms, are the legal team for Floyd’s family. They settled a civil action with the city of Minneapolis for an historic $27 million in March.

Crump said that Wright being pulled over by police during a pandemic when many drivers have expired tags due to months of limited or no DMV access, was an example of implicit bias. He said the issue remains particularly egregious for “marginalized” Americans.

“Daunte Wright is yet another young Black man killed at the hands of those who have sworn to protect and serve all of us—not just the whitest among us,” Crump said in a statement provided to ESSENCE. “As Minneapolis and the rest of the country continue to deal with the tragic killing of George Floyd, now we must also mourn the loss of this young man and father. This level of lethal force was entirely preventable and inhumane.”

From civil rights groups to the White House, this latest police-involved slaying has stirred emotions. Former President Barack Obama and former First Lady Michelle Obama said in a statement their hearts were “heavy” and that the country must “reimagine policing and public safety.”

“Michelle and I grieve alongside the Wright family for their loss. We empathize with the pain that Black mothers, fathers, and children are feeling after yet another senseless tragedy. And we will continue to work with all fair-minded Americans to confront historical inequities and bring about nationwide changes that are so long overdue.”

Karissa Lewis, National Field Director of the Movement for Black Lives, said in a statement: “We say it again: there is no “reforming” this system— the time is now to divest from deadly policing and invest in a vision of public safety that protects us all. We’re grieving alongside Daunte Wright’s family and community, and will continue fighting to divest from systems of oppression in the pursuit of justice and Black liberation.”

NOBLE said in part: “Even as police reform measures are being enacted across many municipalities, as advocacy for reform grows, moreover as our nation is in the very midst of the trial for the death of George Floyd, with evidence and excruciating witness testimony bearing out the circumstances surrounding his death, we continue to be confronted with examples of excessive use of force, lack of transparency and understanding of the precept for police engagement fitting the encounter, and another unfortunate fatality of a citizen of color.”

The statement continued: “When will police executives and civic leadership stop having to explain away failures of those determined to flout the tenet of “serve and protect?”

As the families of George Floyd, Daunte Wright and countless others seek justice, Crump vowed to fight, but lamented the current state of affairs.

“What will it take for law enforcement to stop killing people of color? The growing number of Black men and women who have been killed or harmed by police is far too hefty a price for the equality we are seeking.”

The Obama Foundation has an online portal where one can learn about the issues, connect with local/national organizations, find resources on trauma and mental health, and/or take action. Click here for more info.