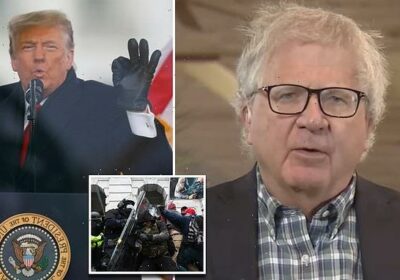 Facebook’s Oversight Board co-chair said Sunday that Donald Trump’s rhetoric and social media posts ‘egged on’ riots during the Capitol attack on January 6.

‘On January 6, President Trump issued those statements as a mob was rampaging through the Capitol, as members of Congress were cowering in fear, as the rioters were threatening Vice President Pence’s life,’ oversight panel co-chair Michael McConnell told ‘Fox News Sunday’ host Chris Wallace.

‘And at that time, he issued these statements which were just egging on — with perfunctory asking for peace, but mostly he was just egging them on — to continue,’ he added.

McConnell says it’s clear the posts were ‘in plain violation of Facebook’s rules against praising dangerous individuals and organizations at a time of violence.’

Facebook’s independent review board decided Wednesday to extend the ban on Trump’s accounts for another six months while CEO Mark Zuckerberg gets his ‘house in order.’ The panel will not issue a permanent decision on Trump’s account, instead claiming that will be up to Facebook when the six months is up and they have fixed issues related to their content moderation processes.

‘Mr. Trump is subject to the same rules on Facebook as everyone else,’ he asserted. 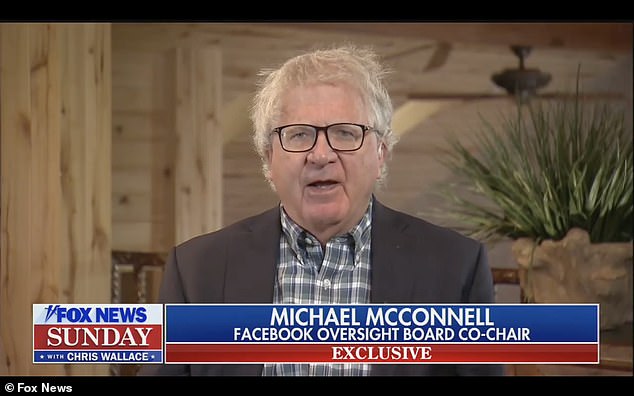 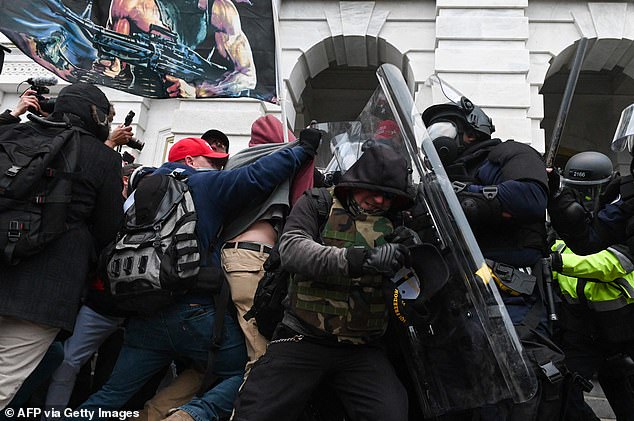 ‘He put himself in this bed and he can sleep in it,’ McConnell said, adding Trump ‘bears responsibility for his own situation.’

The events, and Trump’s actions leading up to them, ultimately led to the second impeachment trial against him, which like the first did not result in conviction.

Also while speaking to Fox on Sunday morning, McConnell said Facebook’s rules are in ‘shambles’.

McConnell is the co-chair of the board assigned to look at the platform’s content moderation decisions.

He told ‘Fox News Sunday’: ‘We gave them [Facebook] a certain amount of time to get their house in order. They needed some time because their rules are a shambles.’

‘They are not transparent, they are unclear, they are internally inconsistent,’ McConnell said of the platform’s rules.

‘So we made a series of recommendations about how to make their rules clearer and more consistent,’ he added. ‘And the hope is that they will use the next few months to do that and then when they come back and look at this they will be able to apply those rules in a straightforward way.’ 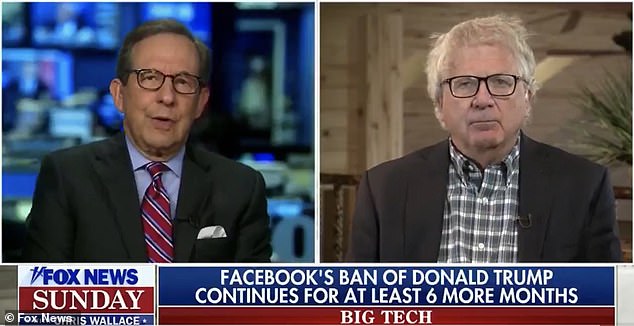 McConnell told Fox host Chirs Wallace: ‘They needed some time because their rules are a shambles. They are not transparent, they are unclear, they are internally inconsistent’

McConnell said the board found in its review that Facebook is justified in suspending Trump’s account, but was not justified in taking the former president’s statements down indefinitely.

‘They did not provide any reasons for that, that is not a provision in their rules, that was wrong,’ he said.

Conservatives insist they are unfairly targeted, censored and banned online by social media sites with left-leaning values and CEOs.

On Wednesday, the board released its decision to uphold the ban on Trump’s account for the next six months, in which time it will be reevaluated by Zuckerberg’s team.

McConnell said Wednesday that Facebook’s content moderators will ultimately have to decide whether to restore Trump’s account, permanently restrict it or give a set amount of time for a suspension.

Keeping him in limbo or relying on the panel to make a decision is not an option McConnell laid out.

‘Facebook must make its decision and be held accountable for what it decides,’ the oversight panel co-chair said.

McConnell, 65, is a constitutional law scholar who was a Republican-appointed judge for the Tenth Circuit in the U.S. Court of Appeals. Since ending his tenure with the court in 2009, he has been a professor and Director of the Constitutional Law Center at Stanford Law School.

In May 2020, he was appointed to Facebook’s content oversight board.

Trump released a statement Wednesday claiming the decision by the board to uphold its ban on his accounts is a ‘total disgrace’ and claimed Big Tech will pay a ‘political price’ for taking away his free speech.

‘What Facebook, Twitter, and Google have done is a total disgrace and an embarrassment to our Country,’ Trump fumed in a statement Wednesday.

‘Free Speech has been taken away from the President of the United States because the Radical Left Lunatics are afraid of the truth, but the truth will come out anyway, bigger and stronger than ever before,’ he added.

‘The People of our Country will not stand for it! These corrupt social media companies must pay a political price, and must never again be allowed to destroy and decimate our Electoral Process.’

In a Thursday statement, Trump said Big Tech companies banning him are just another way to dismiss and stifles his claims of widespread voter fraud and a ‘rigged’ 2020 election.

The Facebook and Twitter ban on Trump earlier this year – while he was still president – was an unprecedented move of censorship on a world leader. The move sparked a global debate over how much control social media and big tech should have over free speech online. 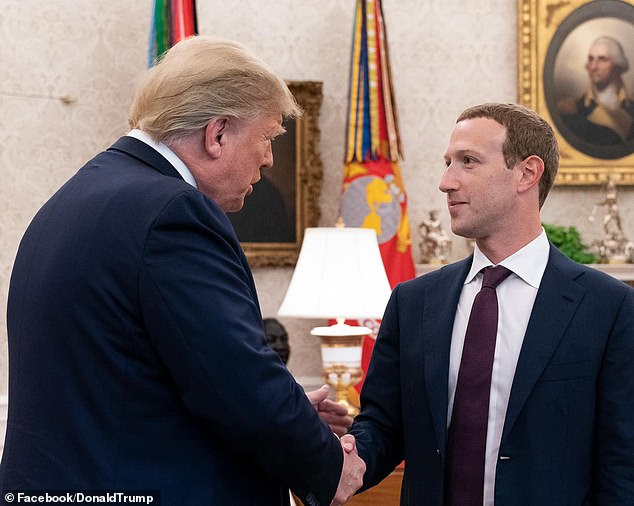 Facebook’s oversight board, which CEO Mark Zuckerberg  (pictured above) called its ‘Supreme Court’, decided Wednesday to uphold the ban on Trump for six months

The Facebook Oversight Board was set up by the platform as an apparent self-check mechanism amid growing calls for it to be split up because it is too powerful.

The board is funded by Facebook, and all of its 20 left-leaning members are paid six figures for approximately 15 hours of work a week.

The sole purpose of the oversight board is to rule on issues that are too big for Facebook or to make decisions it simply doesn’t want to make.

But in their decision on Wednesday, the five deciding board members refused to rule either way, instead upholding Facebook’s ban and telling the site it would need to decide for itself whether to ban the former president.

Republicans – and even many Democrats – have said the ban on Trump proves Big Tech has too much power.

‘I’m glad that Donald Trump is not going to be on Facebook,’ the Massachusetts senator clarified to Yahoo Finance. ‘Suits me.’

‘But part two is that this is just further demonstration that these giant tech companies are way, way, way too powerful,’ Warren asserted.

‘They need to be broken up in order to keep commerce flourishing,’ she said, echoing her calls made during her 2020 bid to be the Democratic nominee for president.

Of Zuckerberg calling the Oversight Board the ‘Supreme Court’ of Facebook, Warren said: ‘Listen to the arrogance of it.’

‘The name of the group that made the decision is called the Supreme Court,’ the Democrat congresswoman bemoaned. ‘I missed the part where those people had hearings in front of Congress, and were voted on before they were made decision makers with this kind of authority.’