‘Excellent recovery’: Boy with rare COVID-related illness on the mend A Victorian child with a rare inflammatory illness linked to coronavirus has made an "excellent recovery" and is likely to be discharged from hospital this week.

The nine-year-old boy was admitted to the intensive care unit at Monash Children's Hospital with a severe immune response condition known as Paediatric Multi-system Inflammatory Syndrome or PIMS-TS. 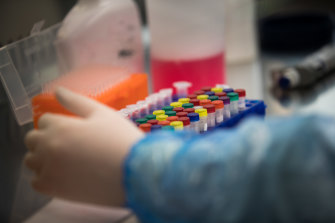 Swabs are tested for coronavirus at University Hospital Geelong.Credit:Jason South

The boy is one of the first Australia children to present with the condition. Doctors say there have been a tiny number of confirmed PIMS-TS cases nationwide with a small number still under investigation.

The boy first presented to a Melbourne hospital last week with abdominal pain, fever and a red rash. Doctors examining him diagnosed him with the mysterious syndrome.

He was then transferred to Monash, where he was treated with intravenous antibodies.

Steroids were also used to dampen his immune response along with blood thinner medication to prevent the risk of blood clots.

“He’s made an excellent recovery,” the hospital's head of infection and immunity, Professor Jim Buttery, said.

"The hospital this child first presented to made a good, rapid diagnosis and this child was able to receive therapy early and well. He’s likely to be going home this week, which is great news."

PIMS-TS is an extremely rare illness that involves swelling of blood vessels in the body. It can trigger a temperature, rash or swollen glands in the neck.

While children have largely been spared from the worst health outcomes of coronavirus, in April this year a cluster of cases of PIMS-TS among children in Britain prompted an urgent alert to doctors across the world.

At least three children globally have died after developing the disease.

The condition is similar to Kawasaki disease, a rare paediatric multi-system inflammatory syndrome which has similar symptoms of fever and peeling skin.

It’s not clear yet if PIMS-TS is classic Kawasaki disease. The condition tends to occur in primary-school-aged children or early adolescence.

A recent study published in The Lancet detailed 78 cases reported by paediatric units in Britain in April and May, finding that boys and those from ethnic minorities were over-represented. The average age of affected children was 11.

PIMS-TS has also been found in France, Switzerland and Spain, appearing in children two to six weeks after they contract COVID-19.

"We know from our colleagues overseas especially in Europe, the United Kingdom and North America where they have seen hundreds of cases that this is a rare complication that occurs some weeks after the initial coronavirus infection," Professor Buttery said.

Why this complication develops in children weeks after they have been infected with the SARS-CoV-2 virus is one of the many unsolved mysteries of COVID-19.

"The answer is we don’t know why this occurs, but we think it’s the immune system reacting to the initial infection," Professor Buttery said. "What we do know is that it is a complication that occurs in a very small percentage of cases."

The condition is so rare that there are currently no national medical trials under way about how to treat the condition. Doctors at Monash Children's Hospital followed the guidance of colleagues overseas who had treated children with the condition.

Professor Buttery said it was still possible Victorian doctors would see more cases of PIMS-TS, but as infections plummeted across the state the likelihood of this occurring decreased too.

"We're expecting to see only a few cases of PIMS-TS," he said.

"We know that Melbourne had its peak in the last six weeks and hopefully we will now have much lower cases. It's possible we may see a few more cases, but as the number of cases goes down, after a lag of a few weeks, we would expect this condition to go away too."

Global data has continually suggested young children seem to catch and transmit coronavirus less than adults. Children of all ages also tend not to experience severe complications from it.

"They've either had very, very mild symptoms or no symptoms at all," Professor Buttery said.

"We have had not had children severely unwell with acute COVID infection. None of the children have needed significant intensive care therapy. We've been very lucky."

The main symptoms of PIMS-TS are a high fever, stomach pain, and rash.

"The bottom line is if parents are concerned consult a doctor," Professor Buttery said.

"Australian health authorities have been alerted to what this health condition looks like so they're able to advise parents on whether this could require further attention."