Ex-headmaster, 71, is jailed for two years for stalking his teacher partner after trying to suffocate her with a pillow 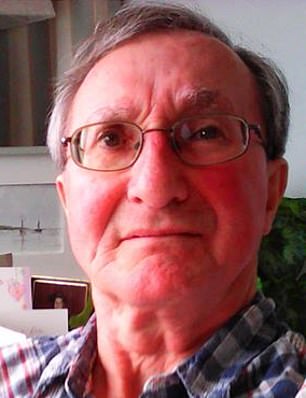 Russell Hollins (pictured), 71, was jailed for two years concurrently on both the stalking and non molestation breach charges

A former headmaster has been jailed for stalking his ex-partner who he branded ‘intellectually inferior’.

Russell Hollins, 71, had been head of prep at various private and grammar schools including King Henry VIII in Coventry, the Royal Wolverhampton school and Truro school.

But for the last 12 years he has harassed and stalked three different women.

Exeter Crown Court heard Hollins had been in a relationship with teacher Sally Edgington for a year and she moved into his home while her bungalow was being renovated.

But Hollins threw her out and she needed the police to intervene to retrieve some of her belongings which he had refused to return, said prosecutor Miss Kelly Scrivener.

Their romance was on and off for five months in which Hollins was loving towards her and then hateful and three times Miss Edgington reported him to the police for his mental and physical abuse – including one time when he tried to suffocate her with a pillow, the court was told.

Miss Scrivener said Miss Edgington was left ‘mentally broken by his behaviour’ as he bombarded her with phone calls to her landline, mobile, emails and social media posts.

She got a non molestation order but he continued to contact and abuse her as she changed her numbers and blocked him on social media.

Hollins, who lives with his 96-year-old mother in Topsham, Devon, contacted her two adult children and sent messages about his sex life with their mother and made other derogatory claims about the wider family.

He left her a message asking if her home in Warwickshire had been broken into – she was away and asked a neighbour to check the property – and Hollins was there and had strewn the dustbins around the garden and moved plant pots.

As a neighbour took a photo of Hollins at the scene, the former teacher drove his car at him, leaving the man on the ground but unhurt.

Miss Edgington said his malicious actions had left her ‘traumatised’ and suffering nightmares and said he was ‘totally arrogant, manipulative and had no empathy’.

The court heard he harassed his ex-wife over their divorce settlement and breached restraining orders put in place between 2008 and 2010. 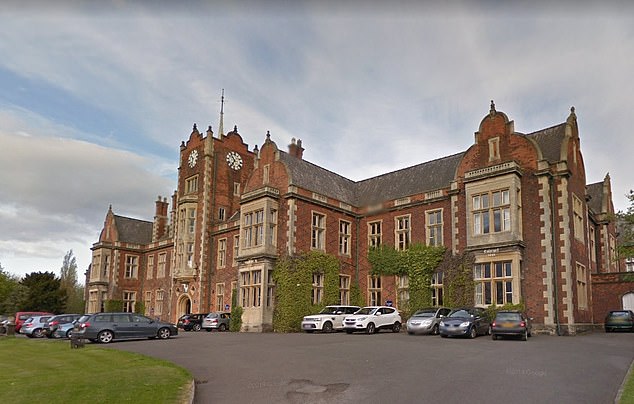 He had been head of prep at various private and grammar schools including King Henry VIII in Coventry (pictured), the Royal Wolverhampton school and Truro school

He was then fined for harassing a woman he met over the internet after she refused to go on holiday to Crete with him.

And he began stalking Miss Edgington causing her serious alarm or distress.

Mr Ed Bailey, defending, said: ‘It is conceded that this is a very serious case of conduct involving emotional and physical abuse of Miss Edgington over a long period of nine months and ignoring a non molestation order out in place to protect her interests,

‘It is behaviour that has caused her to feel degraded and humiliated.’

He said this was the third woman to be the target of Hollins’s behaviour, a man with a distinguished background, a former headmaster, who had led a blameless life until his 60s when his behaviour towards women changed.

‘He became utterly besotted with Miss Edgington and that infatuation had blinkered his behaviour, he could not let her go and he refused to accept the relationship had come to an end.’ 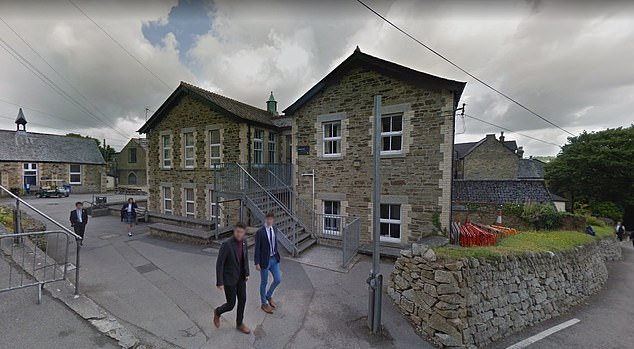 Mr Ed Bailey, defending, said this was the third woman to be the target of Hollins’s behaviour, a man with a distinguished background, a former headmaster, who had led a blameless life until his 60s when his behaviour towards women changed. Pictured: Truro School in Cornwall

Mr Bailey said Hollins behaviour was ‘completely reprehensible, unnecessary and utterly unforgivable’ and the court could say ‘enough is enough’ at this seventh conviction.

Judge David Evans said Hollins regularly ‘abused, insulted and belittled’ Miss Edgington in his messages and tried to get her sacked after contacting her employer.

He said he offered her £25,000 for a new kitchen in a bid to continue the relationship with her and used his own ill health as a tool in an ‘attempt to manipulate her emotionally in your favour’.

‘You have damaged her life,’ said the judge who added Hollins was acting from ‘some sort of inflated sense of self regard, entitlement and subservience’.

He said Hollins could not have been ‘blind’ to the outcome of being jailed and he would have to bear the responsibility of his elderly mother now having to go into care as he will not be there to look after her.

He was jailed for two years concurrently on both the stalking and non molestation breach charges and a restraining order made against the victim and her wider family.

Hollins cannot go to Coventry and Nuneaton in Warwickshire as part of that prohibition order.