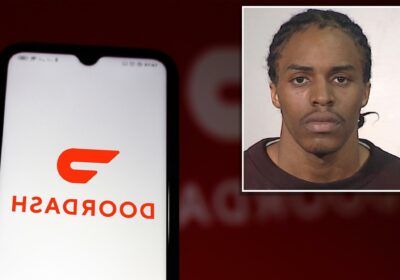 The ex-DoorDash driver accused of tampering with the Chipotle order of an NYPD employee was remanded by a judge Friday for violating his parole in an earlier case.

Lance Layne, 30, allegedly dropped off the food order at the 61st precinct in Brooklyn on Monday after placing a note inside it saying, “Hope that d–k taste good bitch.”

Layne also took a picture of the order and posted it to Facebook with the caption, “You know I’m about to violate the s–t out of this order, 61st Precinct. I dreamed of moments like this,” a prosecutor claimed at the suspect’s Brooklyn Criminal Court appearance Friday.

Judge Claudia Daniels-DePeyster held Layne without bail because the Chipotle incident violated the terms of his parole in the shooting of a police or peace officer in 2011.

Layne — who had claimed to reporters that the disgusting Chipotle incident was nothing more than a “prank” — is on parole in the shooting through November 2024.

He has an extensive criminal history, has allegedly been a member of the Bloods gang and served more than three years in prison for aggravated assault in the attack on a police or peace officer in April 2011, cops said.

Layne alleged in his Brooklyn federal lawsuit from 2012 that during the melee, he accidentally shot himself and that officers interrogated him at the 60th Precinct and beat him up before they sent him to the hospital to receive medical attention for the wound.

He also claimed they hurled racial slurs at him and pressured him into a false confession, the court papers said.

He denied shooting anyone but himself.

The city did not admit to any fault or liability when it settled the case with Layne, according to court papers from March 2014.

State prison records show that Layne was sentenced to 10 years behind bars for his conviction in the case. He served more than three years and was released on parole November 2019, the database shows.

Two of the cops involved received slaps on the wrist for not giving Layne medical attention including a 10-day work penalty and training on how to give medical attention, according to the Civilian Complaint Review Board’s officer misconduct database.