Brussels steps up ‘war games’ to get ready for No Deal: EU demands Britain still pay £39bn divorce bill if it wants to thrash out a trade deal

Brussels was war-gaming for a No Deal Brexit last night amid growing concern that Theresa May’s deal will be defeated again today.

Member states met Michel Barnier, the EU’s chief negotiator, yesterday before discussing the high price Britain must pay to get round the table after a hard Brexit on April 12 – the next cliff-edge for Brexit.

EU ambassadors said Britain would still have to pay the £39billion divorce bill agreed in Mrs May’s deal if it wanted trade talks. 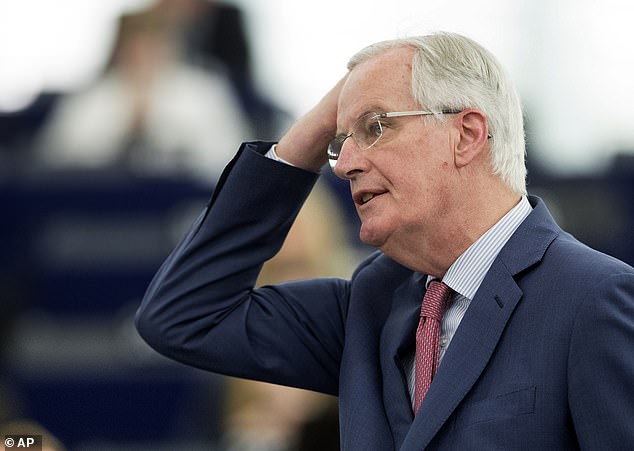 Member states met Michel Barnier, the EU’s chief negotiator, yesterday before discussing the high price Britain must pay to get round the table after a hard Brexit on April 12 – the next cliff-edge for Brexit

The UK would have to signal its intention to settle the bill by April 18, ambassadors for the remaining 27 member EU states agreed.

They would also expect Britain to implement the terms of the controversial Irish backstop for avoiding a hard border.

According to one diplomatic note following yesterday’s meeting, which claims the Good Friday Agreement requires the border to remain open: ‘For the first couple of months there are some contingency measures in the EU side that mitigate the cliff and turn it into more of a steep hill.

‘But if the UK wants to avoid the cliff after that moment it will have to make good on its obligations under the Good Friday Agreement and outstanding tab.’

The backstop issue has been the main sticking point for getting Mrs May’s deal through the Commons because it involves keeping Northern Ireland in parts of the single market while the rest of Britain would not be – something the DUP refuses to accept.

EU officials began setting out their terms yesterday as expectations of a No Deal Brexit grew after the Commons rejected eight Brexit options on Wednesday. They also believe Mrs May’s deal will be rejected for a third time by the Commons today. 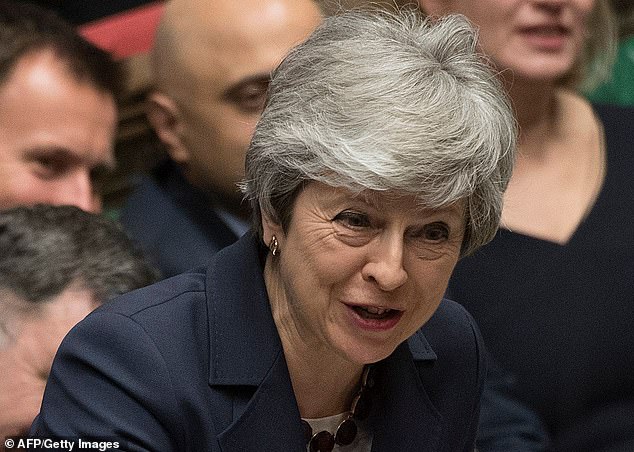 In order to secure a trade deal with the bloc, EU ambassadors said Britain would still have to pay the £39billion bill agreed in Theresa May’s Withdrawal Agreement in the event of no deal

According to the diplomatic note, after Mr Barnier set out his concerns the bloc was stepping up its ‘full-on crisis’ plans and discussing ‘full-on prep for No Deal’.

A senior diplomat said: ‘Today the feeling is rather of resignation and acceptance that No Deal is likelier than ever.’

EU ambassadors agreed the UK should return to the negotiating table ‘pretty soon’ after a hard exit, asking to secure ‘the vital lines and procedures needed for the UK economy to survive’. Another source said: ‘The EU is already discussing what their price is for entering those discussions.’ 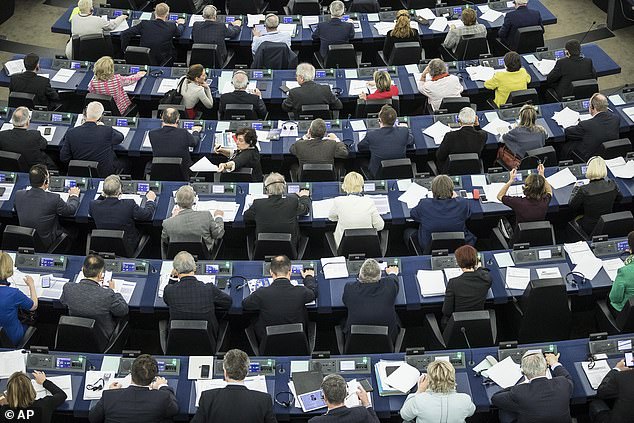 The bloc has agreed to extend Brexit day to May 22 if Mrs May’s deal is passed. But another failure to ratify it in the Commons today would mean leaving on April 12

No Deal contingencies to keep planes flying and haulage routes open, which expire after nine months, were also talked about.

Member states were said to be ‘preparing the crisis structure and conditionality for the EU to return to the table after Brexit’.

The bloc has agreed to extend Brexit day to May 22 if Mrs May’s deal is passed. But another failure to ratify it in the Commons today would mean leaving on April 12.

It is thought the bloc could offer a longer extension before then only if Britain moved towards a softer Brexit, a second referendum or pledged to hold a general election.

French former minister Nathalie Loiseau, who is running Emmanuel Macron’s European election campaign, dismissed the idea of a long extension for a second referendum, adding: ‘A new referendum would be a denial of democracy. Britain must leave.’

But Poland’s European affairs minister Konrad Szymañski said Britain should be given as much time as it needs, adding that Mrs May was ‘fighting for our cause, too’ in an ‘heroic struggle’ because ‘No Deal would harm us all’ and her deal would protect the interests of the bloc.