Home » World News » England and Scotland give out just 265,000 Covid vaccines on Monday

England and Scotland give out just 265,000 Covid vaccines on Monday 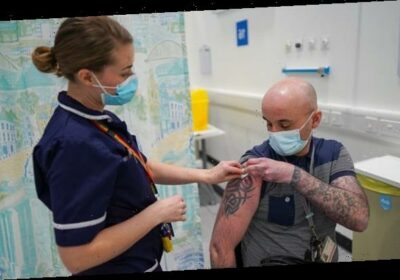 England and Scotland give out just 265,000 Covid vaccine doses on Monday as UK misses daily jab target for two days in a row amid European supply row

England and Scotland gave out only 265,000 Covid vaccines on Monday, official figures show, meaning Britain has missed its daily uptake target for the second day in a row.

NHS England figures show 236,177 injections were carried out yesterday, while Public Health Scotland numbers reveal there were 28,558 dished out North of the Border.

The UK needs to be vaccinating at least 400,000 people every day for the next three weeks to fulfil Number 10’s lofty promise of immunising all 15million of the most vulnerable Brits by mid-February.

Figures show about 6.5million Brits have received at least one dose of either the Oxford University/AstraZeneca or Pfizer/BioNTech vaccines, which leaves 8.4million still to be inoculated.

It comes after only 221,067 vaccines were administered on Sunday, down by more than half on the record high of 493,013 on Saturday.

A full update on the progress of the entire UK programme will be announced later today. 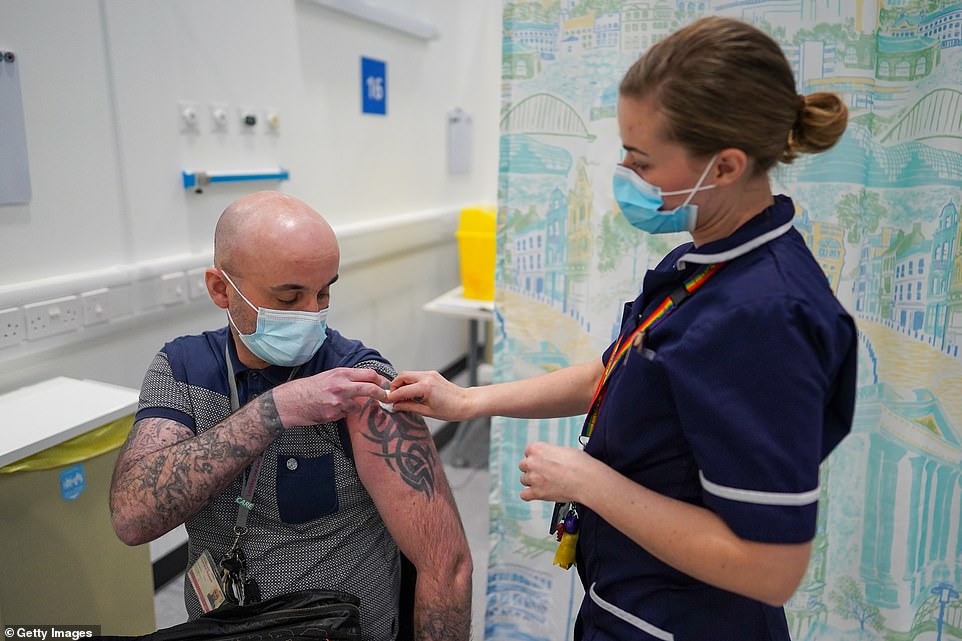 Vaccine centres are opening all over the UK but Matt Hancock last night admitted that supplies are ‘tight’ and the access to more doses is the ‘rate-limiting factor’ of the rollout (Pictured: Dale Snowden gets his vaccine in Sunderland) 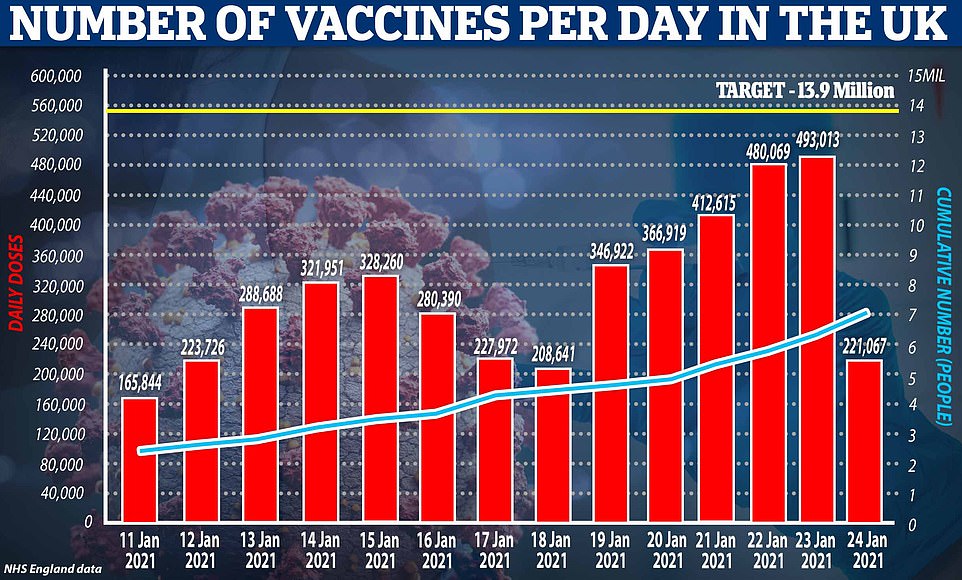 Early figures show there were 220,000 vaccinations in the UK yesterday. The number will be updated later today by the Department of Health to include jabs in all settings

Speaking at a Downing Street press conference last night, Health Secretary Matt Hancock insisted that Britain was ‘on track’ to reach the most vulnerable groups by the middle of February.

He said that 6.6million people had now received a jab, more than one in nine of the adult population, and in the last week 2.5million got a vaccine, which was equal to a rate of more than 250 people per minute.

Mr Hancock told the Downing Street press conference: ‘We’re on track to offer everyone in the top four priority groups a jab by February 15’.

The race to deliver the vaccine comes after care home residents have accounted for almost a third of the total number of coronavirus deaths in England and Wales. As of January 15 2021, a total of 30,851 residents had been killed by the virus.

Separate damning ONS figures show weekly fatalities among care home residents in England alone have almost tripled in the last fortnight, as the virus makes a deadly resurgence in the sector.

The number-crunching body said there were 1,705 deaths in English care homes reported to the Care Quality Commission in the seven days to January 2, up from 661 a fortnight ago. 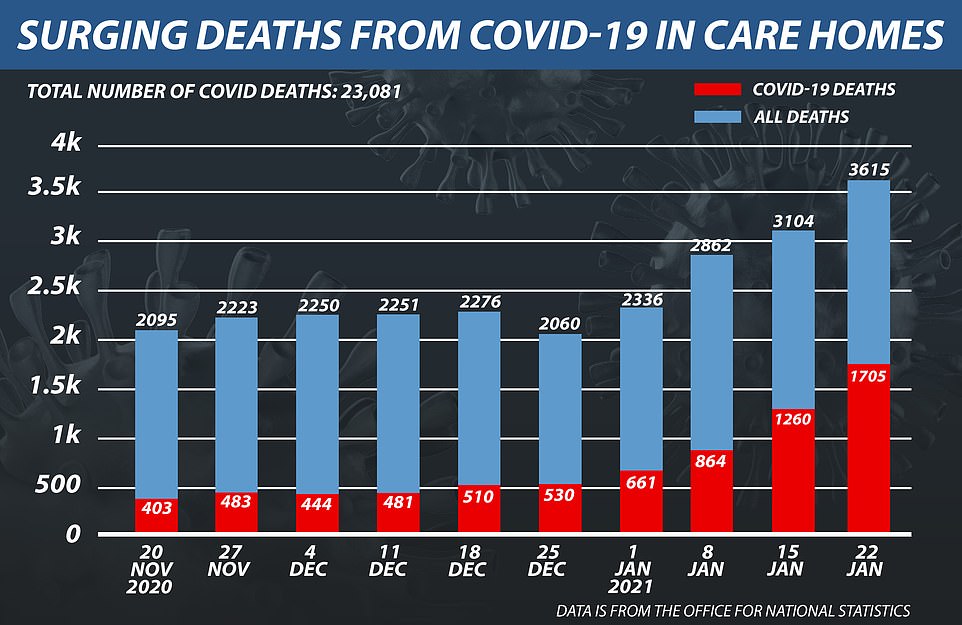 The number-crunching body said there were 1,705 deaths in English care homes reported to the Care Quality Commission in the seven days to January 2, up from 661 a fortnight ago

The UK could miss out on millions of doses of the coronavirus vaccine if the European Union suspends deliveries to countries outside the bloc.

Britain is expecting to receive another 9million doses by mid-February from Oxford/AstraZeneca and Pfizer/BioNTech.

But if Eurocrats blockade jab exports across the channel, American drugs company Pfizer – which manufactures vaccines in Puurs, Belgium – will be unable to ship supplies.

As many as 3.5million doses of their jab are expected to arrive over the next three weeks, reports the Telegraph, a shipment that wouldn’t land on British soil if Brussels chose to redirect supplies.

The move would not, however, cut supplies of the AstraZeneca vaccine because the ‘vast, vast majority’ of their jabs are made in the UK.

There are fears that any cut in deliveries could leave the Government unable to meet its target of vaccinating 15million of the most vulnerable by mid-February.

But it is not clear how many doses are already sitting in warehouses in the UK, which ministers say they won’t reveal because of ‘security concerns’.

The UK has already vaccinated more than six million of the most vulnerable against the virus, as it steams towards its mid-February target.

For the first time the ONS has released data bringing together the deaths of care home residents in care homes and other settings since March 2020 up to the present.

The number of deaths involving Covid-19 in care home residents has been rising in recent weeks. A total of 1,719 deaths were registered in the week to January 15 – the highest figure since the week ending May 21 2020.

The Independent Care Group, which represents providers in York and North Yorkshire, said the figures make ‘grim reading’ and demonstrate the need to avoid complacency.

Chairman Mike Padgham said: ‘Yes, we now have vaccines, and the Government is to be congratulated on the speed at which it is protecting the vulnerable.

‘But Covid-19 is not beaten yet and we must remain cautious and, on our guard, observing all the guidance and keeping everyone in care settings – care and nursing homes and those receiving care in their own homes – as safe as we can, alongside those who are caring for them.

‘The news that carers are going to be supplied with lateral flow tests they can do at home is another positive step and will hopefully have an impact and help protect carers who are selflessly looking after others.’

Nuffield Trust Deputy Director of Research Sarah Scobie said that care homes are ‘feeling the strain’ and said it will take time for the vaccine rollout to affect figures.

She said: ‘The number of registered deaths from Covid of care home residents has increased by 25 per cent since last week.

‘The sector is again feeling the strain, and while the vaccine roll-out for the most vulnerable is continuing at impressive speed it will be a while until the benefits feed through to the figures.’

The ONS report today also found coronavirus accounted for four in 10 deaths registered in England and Wales in the week ending January 15 – the highest proportion recorded during the pandemic.

There were 7,245 deaths registered where the virus was mentioned on the death certificate in England and Wales, a 20 per cent rise from the previous week, when 6,057 deaths were registered.

It is also the third highest weekly number recorded during the pandemic and at 40.2 per cent, the week with the highest proportion of deaths involving Covid-19 recorded so far.

There have also been concerns the drive could be held up by supply of the vaccine, which has been described as ‘lumpy’ and could yet threaten to derail the plans.

Ministers have refused to reveal how much is already in the country, citing a security risk, but there have been reports of deliveries to centres being scaled down.

Confusion has also been sparked over whether supplies are being diverted to areas lagging behind in the rollout, with the vaccines minister denying this after Mr Hancock said the Government would be redirecting stocks last week.

And both Pfizer and AstraZeneca – suppliers of the only two vaccines being used in the UK – have faced disruption to their shipments as they have scaled up manufacturing.

It comes after EU leaders arranged an urgent meeting with AstraZeneca executives after the company unexpectedly slashed its supply of vaccines to the bloc.

The jab-makers have blamed the EU’s supply chain for their failure to deliver the promised 80million vaccines by the end of March as part of a £300million deal.

AstraZeneca, which developed its shot with Oxford University, said on Friday they could only offer 31million vaccines in the first quarter, a cut of 60 per cent.

Furious EU officials said they will investigate their claims and have questioned why Britain is not suffering from similar delays in the rollout.

Peter Liese, an EU lawmaker from the same party as Angela Merkel, said: ‘The flimsy justification that there are difficulties in the EU supply chain but not elsewhere does not hold water, as it is of course no problem to get the vaccine from the UK to the continent.

‘AstraZeneca has been contractually obligated to produce since as early as October and they are apparently delivering to other parts of the world, including the UK without delay.’

The Anglo-Swedish drugmaker had received an up-front payment of 336 million euros (£298million) from the EU when they struck a deal in August, an EU official told Reuters.

TOP TEN JOBS WITH THE HIGHEST NUMBER OF CORONAVIRUS DEATHS, ACCORDING TO THE ONS

Office for National Statistics (ONS) figures reveal there were 8,000 deaths in people aged between 20 and 64 in England and Wales last year, one twelfth of the total.

And of the more than 5,000 for which a profession was registered, the ONS compiled the statistics to show which were recording the highest number of deaths after an individual tested positive for the virus.