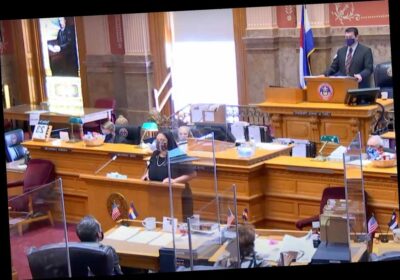 Gun bought by alleged Boulder gunman was recently made legal

Heavy-hearted state lawmakers delivered a series of impassioned speeches at the Colorado state Capitol Tuesday, as they debated how to stop another mass shooting in state.

Lawmakers on both sides of the aisle lined up to talk about their anger and sadness following Monday’s supermarket rampage and detailed plans to curtail another mass shooting like the ones seen in Boulder, Aurora and Littleton, according to an ABC station.

State Sen. Steve Fenberg reportedly called on his colleagues to take action — instead of praying for the 10 people who were gunned by a maniac who opened fire at on Monday.

“You pray because you don’t know the answers — probably because you need guidance. I don’t think we need to pray when it comes to this issue. We need to be leaders, and we need to have conversations about what we can do to keep people safe,” the Democrat said, according to the local TV station.

“I don’t want to be silent. The victims won’t hear our silence,” said Rep. Judy Amabile, a Democrat who represents Boulder.

Amabile added that the legislature should make it easier to get mental health treatment than firearms.

“Our people, your people do not feel safe. I need to rephrase that. It’s not that we don’t feel safe, we’re not safe,” said Democratic Rep. Karen McCormick, according to the station.

State Sen. Rhonda Fields, a Democrat who lost a son to gun violence, reportedly said the latest tragedy highlights the need for a fully-funded police force.

“I was proud to see them show up in Boulder with the appropriate equipment they need to respond to an active shooting — with the force that they needed,” Fields said, according to the article.

Following the speeches, the House Judiciary Committee continued working on a gun reform bill that would require owners to report the loss or theft of a firearm immediately ABC7 reported. The bill was later passed along party lines in the Democratic controlled legislative branches.

“I believe in your right to own firearms. I own firearms. I hunt. We need to be able to have discussions around gun violence prevention,” Democratic Rep. Kyle Mullica reportedly said while calling on Republicans to discuss meaningful reform.

A second bill requiring guns to be stored securely is reportedly being debated in the statehouse.

“We are making the progress. Singularly, any of those things you’re not going to see a major difference really, but collectively that’s what happens. Each one of these pieces of legislation is designed to save lives,” Sullivan reportedly said.

Some Republicans said the measures won’t put an end to shooting rampages.

“What I think we need to look at is criminal control because the last several years we are changing sentencing reform. There are bills this year that are letting criminals stay on the streets,” Cooke said.

In 2013, lawmakers passed tighter gun laws in the wake of the movie theatre shooting. Two anti-gun Democratic legislatures later lost their seats in a recall proxy battle funded by the NRA.

In 2018, Democrats were reportedly able to keep their seats after passing the Extreme Risk Protection Orders bill, which allows a family member to petition a court to remove a gun from someone they think could commit violence.

Democratic lawmakers point to their survival of that bill as a shift in the state’s heavily partisan gun debate, ABC7 reports.

“You can threaten me with recalls, you can threaten me politically, but I’m doing what I said I was going to do when I came down here,” Mullica reportedly said, “and that’s to make sure my community is a little safer.”