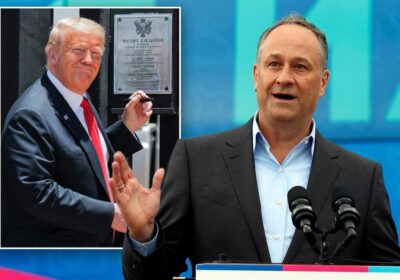 A day after former President Donald Trump called out the Biden administration on scrambling to beat his planned visit to the border next week by sending Vice President Kamala Harris on Friday, second gentleman Doug Emhoff came out to deny that the trip was announced under political duress.

The White House on Wednesday, 91 days after President Biden tapped Harris to handle the escalating crisis at the border, announced that she would accompany Homeland Security Secretary Alejando Mayorakas on a trip to El Paso, Texas.

It came more than a week after the former president revealed last Tuesday that he would travel to the border on June 30 with Texas Gov. Greg Abbott to review what he said the Biden administration had turned into an “unmitigated disaster zone” of “tremendous destruction and death.”

Emhoff, in an interview with NBC News, touted the Biden administration’s line that Friday was just the appropriate time for Harris to go and had nothing to do with Trump’s upcoming visit.

“This is just the next phase in coordination with other parts of the administration,” Emhoff said. “Kamala Harris is not driven by any political issues or political pressure.”

But that’s not how Trump saw the announcement.

“After months of ignoring the crisis at the Southern Border, it is great that we got Kamala Harris to finally go and see the tremendous destruction and death that they’ve created — a direct result of Biden ending my very tough but fair Border policies,” Trump said in a statement Wednesday.

“If Governor Abbott and I weren’t going there next week, she would have never gone!” he continued.

White House press secretary Jen Psaki was pressed about the timing of Harris’ visit during the daily briefing Wednesday.

“What I’m conveying to you is that, while as a part of her assignment, she has of course hosted a number of bilateral engagements, she’s visited the Northern Triangle, she’s made a number of announcements about how to address root causes,” Psaki said, adding that “she was going to assess with the Department of Homeland Security and with the administration when it was the appropriate time to go.”

Asked point-blank whether the White House was dispatching Harris to the border before Trump’s visit, she said no.

“We made an assessment within our government about when it was an appropriate time for her to go to the border,” Psaki said.

Harris has come under withering criticism from Democrats and Republicans over her failure to visit the border, and in recent interviews she dismissed a border stop as nothing but a “grand gesture” and noted that she also hasn’t been to Europe.

The Biden administration, immediately upon entering the White House, began rolling back many of Trump’s border policies and opened the floodgates for illegal immigrants from Central America and Mexico — including thousands of unaccompanied children — to come to the US.