Home » World News » Election to be decided by 'Workington Man'

Election to be decided by 'Workington Man' Election to be decided by ‘Workington Man’: Older, white men in Leave-backing rugby league towns will be the key targets in the battle to win Westminster, say pollsters

The December General Election will be won and lost over the battle for the so-called Workington Man in Leave-supporting seats, a study predicted last night.

A think-tank said the swing seats were populated by older, white, non-graduate male voters living in towns in the North of England with strong rugby league traditions.

It means Boris Johnson will have to take a string of working-class constituencies along the M62 corridor if he is to get the majority he craves.

But election experts yesterday warned a 2019 vote – the third General Election in four years – was likely to be the most unpredictable thanks to the prevalence of smaller parties.

One said the election could result in a House of Commons with as many as 100 MPs from neither the Conservatives nor Labour, making it even harder for either of the main parties to win a majority – opening the door to a hung Parliament and yet further delay over Brexit. 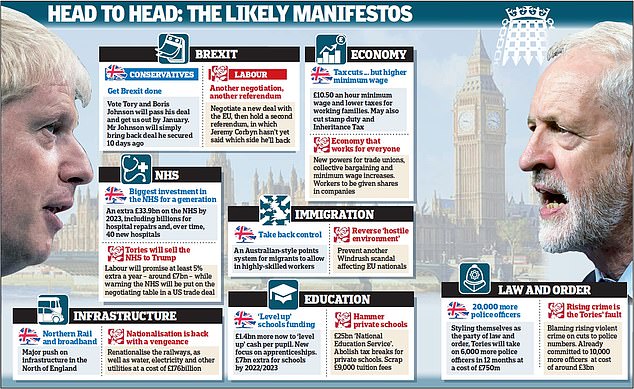 The study by Onward, a Right-leaning think-tank, said today’s swing voter was no longer ‘Worcester Woman’ – seen as a key figure in Tony Blair’s victory in 1997 – but ‘Workington Man’ – named after the town in Cumbria.

He is said to be a typically older, white, non-graduate voter living in rugby league towns in the North.

This voter has lived in his home for more than ten years as either a council tenant or owner occupier.

He favours security over freedom, thinks the economy and national culture is moving away from his views, and voted Leave.

He works in a skilled manual trade or in a lower managerial role and is likely to live in a town or rural area rather than a city.

He is more supportive than most people of a strong leader who doesn’t have to bother with Parliament.

Workington Man wants government to prioritise apprenticeships rather than cut the cost of student loans and thinks it should promote a shared sense of national identity over a diversity of identities. 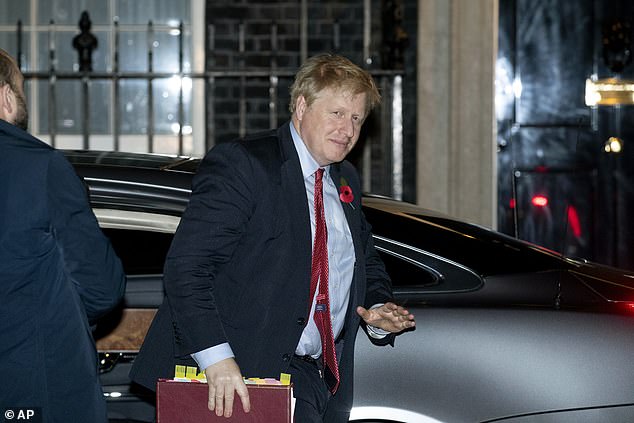 He is particularly sceptical about the benefits of globalisation and thinks we have a special responsibility to protect local institutions such as pubs and post offices from closure.

He is unknown outside Westminster, but 35-year-old Australian Isaac Levido will play a key role in Boris Johnson’s campaign.

A close confidant of fellow countryman Lynton Crosby, Mr Levido is director of politics and campaigning at Conservative Campaign Headquarters.

He will be pivotal in decisions on how the Tories try to defeat Labour and win a majority. He is a protege of Sir Lynton, the electoral strategist known as the ‘Wizard of Oz’ who worked on Mr Johnson’s two winning London mayoral campaigns.

He recently served as the Australian Liberal Party’s deputy director and was at the heart of the campaign that saw Scott Morrison clinch a surprise win. Under plans drawn up by Mr Levido, the Tories are targeting 50 swing seats and defending 50.

He has told ministers he wants to secure a ‘functional’ majority. Privately, he has described Mr Johnson’s ‘fundamentals’ as ‘very positive’.

‘The numbers are moving in the right direction,’ he said.

Onward said without the support of Workington Man, a party cannot win a majority. The Labour-held constituency in which these characteristics are most common among voters is the Cumbrian town of Workington, making it the ultimate bellwether seat in the next election.

Workington is a longstanding Labour seat held by Sue Hayman, which voted Leave and has a 4,000 majority.

Will Tanner, director of Onward, said: ‘This election will be the most volatile in living memory and no party should be complacent. But it is clear that the Conservatives’ path to victory runs through working-class rugby league towns like Workington, Warrington and Wigan, which usually do not give them a second thought – as well as the party’s leafy heartlands in the South of England.’

The seven towns that were founding members of rugby’s Super League – Castleford, Halifax, Oldham, St Helens, Warrington, Wigan, Workington – have returned only one Tory MP in every ten elections since 1918 and currently have a median Labour majority of 13,273. As well as looking to the North, the Tories are chasing gains in Wales, where there are a number of marginal seats up for grabs in pro-Brexit areas.

But there are also considerable dangers for Mr Johnson.

He faces the threat of a Liberal Democrat resurgence in Remain areas in London and the Home Counties – and could see votes going to Nigel Farage’s Brexit Party in the North.

Gains in Wales could also be cancelled out by losses in Scotland, where the pro-independence SNP is expecting a series of wins.

Jeremy Corbyn too faces the threat of being squeezed, with Remain supporters defecting to the Lib Dems and Leave backers going to the Brexit Party or the Tories.

Lord Hayward, a Tory peer and election expert who correctly called the result of the 2016 Brexit referendum, said: ‘Because there are so many parties potentially involved in so many seats, this is a hugely unpredictable election.

‘There are some certainties – the SNP will gain ground in Scotland. The Tories will be under severe pressure from the Lib Dems in the Home Counties and the South West, while Labour is going to face a real difficulty in university seats.’

Yesterday election expert Sir John Curtice said he expected parties other than the two major ones to have a record number of MPs after the election.

‘I think the safest prediction is that we will have a record number of non-Conservative and non-Labour MPs in this Parliament,’ he told LBC.

‘We could have more than 100 MPs that do not belong to either of the other two parties. That matters for two reasons. The first is that it makes it difficult for either Conservative or Labour to win an overall majority if you’re taking the fact that 100 of the seats are already spoken for.

‘Secondly, it matters because this is an asymmetric election. It’s an election that Boris Johnson has to win.

‘If he does not get a majority or something very close to it, he will not be able to stay in government because the Conservatives do not have any friends elsewhere.