A courageous elderly couple fought off machete-wielding attackers with nothing but flip-flops and garden furniture on their porch in India.

The man, identified only as Shanmugavel, 70, was relaxing at his table when an assailant with towel crept up behind him at his home near the Kadaiyam village in Tamil Nadu on Monday.

CCTV shows the bandit throwing his towel round Shanmugavel’s neck and putting him in a strangle-hold before the victim’s 65-year-old wife, Senthamarai, rushes out of the house to challenge the attacker. 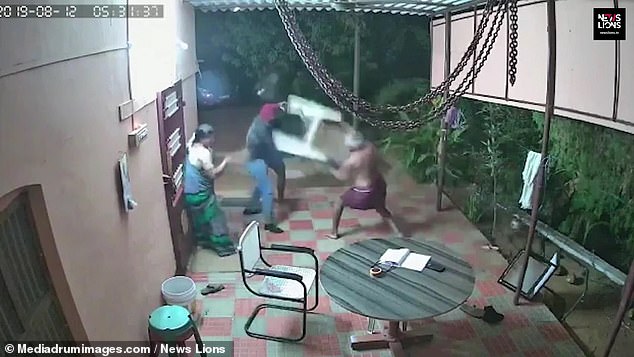 Shanmugavel, 70, can be seen using a plastic chair to defend his home in the Kadaiyam village in Tamil Nadu on Monday 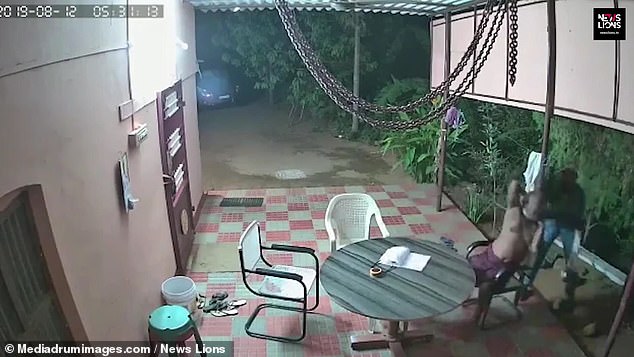 By this time a second would-be burglar has appeared and both wave long blades in the air. But Senthamarai is undeterred and launches flip-flops at them so that her husband is able to break free and take up a plastic chair as a shield.

The husband and wife are unmoved by the danger and use the garden chairs and stools to shield themselves and throw at the attackers.

With little regard for life or limb, the machete-wielders can be seen hacking bits off a chair as the old man holds it up for protection.

Eventually the couple are able to beat the attackers back, hurling fragments of broken chairs at the night raiders until they scarper off. 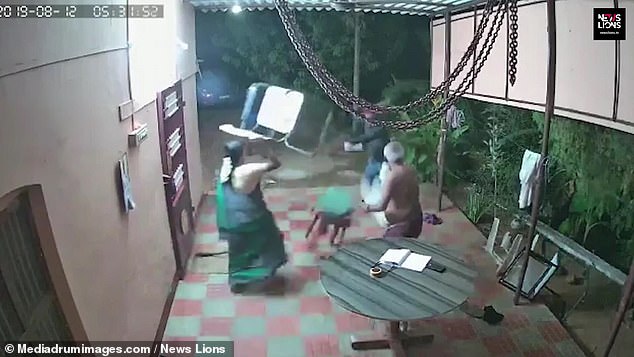 Senthamarai, 65, wields a garden chair at the would-be burglar as he swipes at the couple with a machete 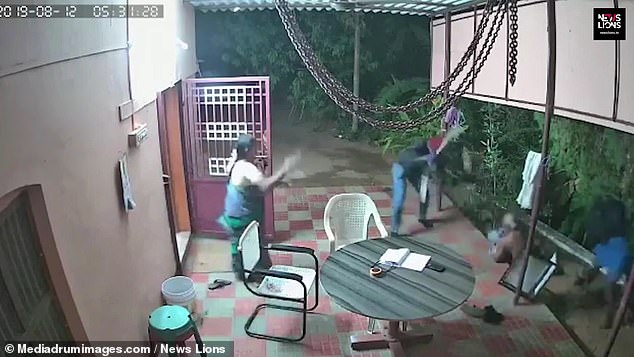 Their porch area was left covered in broken pieces of plastic, but it appeared that the couple were unharmed in the terrifying incident.

After they fled, Senthamarai went to the table and handed Shanmugavel his phone, presumably so that he could call the police.

This is the third attack the pair have faced in the last two years and the thieves managed to get away with some of the couple’s gold.