Cairo: Egypt's president has angrily dismissed corruption allegations made by a businessman-in-exile against the country's military as "sheer lies and defamation".

In viral social media videos posted over the past week, the entrepreneur alleged large-scale misuse of public funds in the building of luxurious hotels, presidential palaces and a tomb for President Abdel-Fattah el-Sissi's mother, who died in 2014.

"I've built presidential palaces and I will continue to do so," el-Sissi, a general-turned-president, said in televised comments. "I am building a new country … All of this is not mine. It's Egypt's." 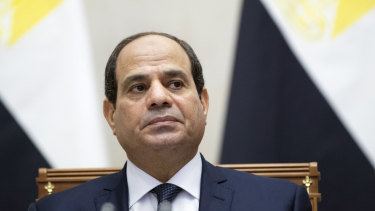 El-Sissi was responding to claims by contractor Mohammed Ali, who said he had worked for the military for 15 years.

The president said his government has been building some of the biggest art and culture projects in the world in the country's $45 billion new administrative capital – el-Sissi's brainchild located in the desert east of the capital of Cairo.

He denied corruption allegations as "sheer lies and defamation," without elaborating.

He portrayed Ali's videos as an attempt to weaken Egypt and undermine the public's trust and confidence in the military and its leader.

"The military is a patriotic, honest and firm military. Its firmness stems from its honour," he said angrily.

Appearing to fight back tears, el-Sissi said he risked his life when, as defence minister, he led the military's overthrow of an elected but divisive Islamist president in 2013 amid mass protests against his brief rule.

Ali said he recorded his video statements in Spain over the past week.

Hashtags with his name have been trending for days as he addressed millions of Egyptians using his cellphone while sitting in a closed office in an unknown location in European exile.

Ali claimed he left Egypt while the military owes him 220 million Egyptian pounds, or $13 million, for services he provided. He did not provide evidence to support his claims.

While it's nearly impossible to verify Ali's claims without an independent investigation, his company's official website says the firm is involved in joint projects worth millions of dollars with the Egyptian army.

Ali's father Ali Abdel-Khaleq, who is a retired army commando, confirmed the close relationship between his son's companies and the army in a lengthy interview on a pro-el-Sissi TV network called Sada al-Balad.

He denied, however, that the military owes his son money and said it's the other way around. "I am shocked and devastated very much. The army is my life," he said.

El-Sissi's supporters accused Ali of conspiring against the military after being lured by the Muslim Brotherhood, the now-outlawed Islamist political group treated as the state's No. 1 enemy.

Ahmed Moussa, a well-known TV presenter loyal to el-Sissi, earlier this month on his talk-show described Ali as a "fugitive" who fled the country for failing to settle debts after receiving hefty bank loans.

Egypt's Dar al-Ifta, an Islamic educational institution that is in charge of religious edicts, posted on Twitter in apparent dismissive reference to Mohammed Ali: "If you see a man who is defending the truth but is cursing, insulting, with anger, then learn that he has bad intentions because the truth isn't in need of such (actions)."

Ali said his company, Amlak for General Contracting, has carried out projects with the military's business arm, the so-called Engineering Authority.

The authority became the biggest contractor for the country's mega projects, worth billions of dollars. However, due to many limitations either in expertise or capacity, the authority subcontracted with hundreds of civilian companies in return for a margin of profit.

Over the years, critics have questioned the expanding role of the military in the business world and economic interests and the seemingly unfair competition with the country's private sector. They say the military enjoys advantages because it's exempted from taxation and proper auditing.