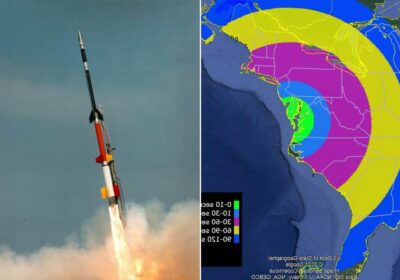 Look out! When debris from huge Chinese rocket will crash into Earth

A rocket and a hard place: Chinese space junk may fall back to Earth in uncertain path

Residents along most of the eastern US could catch a glimpse of a NASA rocket launch Saturday.

The NASA suborbital sounding rocket is scheduled for liftoff no earlier than 8:02 p.m., with a 40-minute launch window, according to the space agency. The rocket is on a mission to explore energy transport in space.

The four-stage Black Brant XII rocket, which will be launched from NASA’s Wallops Flight Facility in Virginia, may provide a light show for space enthusiasts from the Atlantic coast to the Mississippi River, weather permitting.

Live coverage of the mission will be available on the Wallops IBM video site beginning at 7:40 p.m. on launch day.

The cloud cover over the Big Apple on Saturday night is expected to be 38 percent, according to AccuWeather, with a 13 percent chance of precipitation.

The launch will include the release of barium vapor – which is not harmful to people or the environment — that will form two green-violet clouds that may be visible for about 30 seconds, according to NASA.

The vapor will be released about 9 minutes and 30 seconds to around 10 minutes after blastoff at about 217 to 249 miles above the Atlantic Ocean and about 550 miles downrange from Wallops, just north of Bermuda.

The spherical clouds will be a mixture of green and violet, but that phase only lasts about 30 seconds when the un-ionized component of the cloud diffuses.

After exposure to sunlight, the vapor clouds are expected to quickly ionize and take on a violet tint.