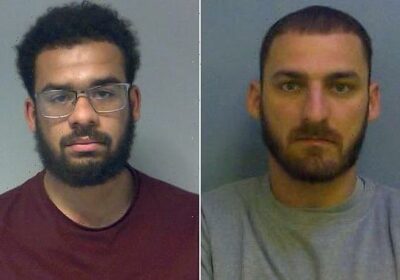 Two men have been jailed after the killing of a man during a street brawl arranged on WhatsApp to settle a feud over a woman.

Father-of-four Beau Robinson suffered fatal injuries after he was kneed in the fight outside his parents’ home in Wyndham Crescent, Burnham, Buckinghamshire, on June 20, last year.

These were inflicted by Martin Fleming, 20, and Daniel Hicks, 31, who had been charged with murder following the attack, which happened on Father’s Day.

They have now been jailed for a combined total of more than 12 years after a court accepted lesser pleas of manslaughter and other offences.

Reading Crown Court was told today that the fight came about after Hicks, who used to play football for Slough Town FC, and Mr Robinson exchanged words over a woman. 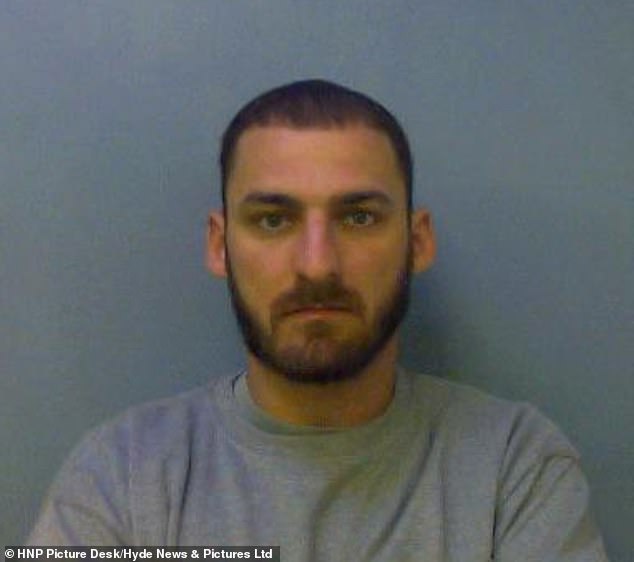 Daniel Hicks, 31, arranged to meet up with Mr Robinson over WhatsApp after the pair developed a feud over a woman

Following this a punch-up was arranged over WhatsApp, with 35-year-old Mr Robinson bringing a baseball bat with him.

Both defendants denied the charge of murder and the pleas entered were deemed acceptable by the prosecution.

Hicks admitted manslaughter and possession of an offensive weapon – a kitchen knife – in relation to the brutal attack on Beau Robinson.

Fleming admitted a charge of violent disorder in relation to the attack in June last year.

James Lofthouse, prosecuting, said: ‘Hicks was seen on CCTV wildly punching Mr Robinson in the middle of the road.

‘It was described by one neighbour as being like a drunken pub fight – another described it as Mr Robinson being pummelled.

‘As they came together, Hicks had a knife and got Mr Robinson in a headlock and repeatedly punched him. Mr Robinson walked the short distance to his address. His father could see he was hobbling and his face was swollen.

‘His father was trying to reassure him help was on the way, but he slumped into his father’s arms.

‘Despite the best efforts of paramedics, they were unable to resuscitate him and he was declared dead.

‘On June 22, police officers stopped a blue Vauxhall Corsa, as one of the passengers was lying down to avoid being seen.

‘It was Hicks and he was arrested,’ said the prosecutor.

‘Fleming told his neighbour he wanted her to take him to the police station. He kept saying the best thing to do was to turn himself in. He allowed himself to be handcuffed at the station.’

He also told the courtroom how Hicks had nine previous convictions for 12 offences, all relating to violence. One conviction had a suspended sentence ordered. Fleming had three previous unrelated minor offences.

Defending Hicks, Richard Wormald QC, said: ‘He has expressed his genuine shock and disbelief at what happened. The cause of death of Mr Robinson was very unusual and the death was not intended.’

A post mortem examination on Mr Robinson’s body revealed that the cause of death was not from the repeated blows to the face but was caused by a knee making contact with his abdomen.

It was not believed to have been a particularly powerful blow but caused an internal rupture and blood loss. 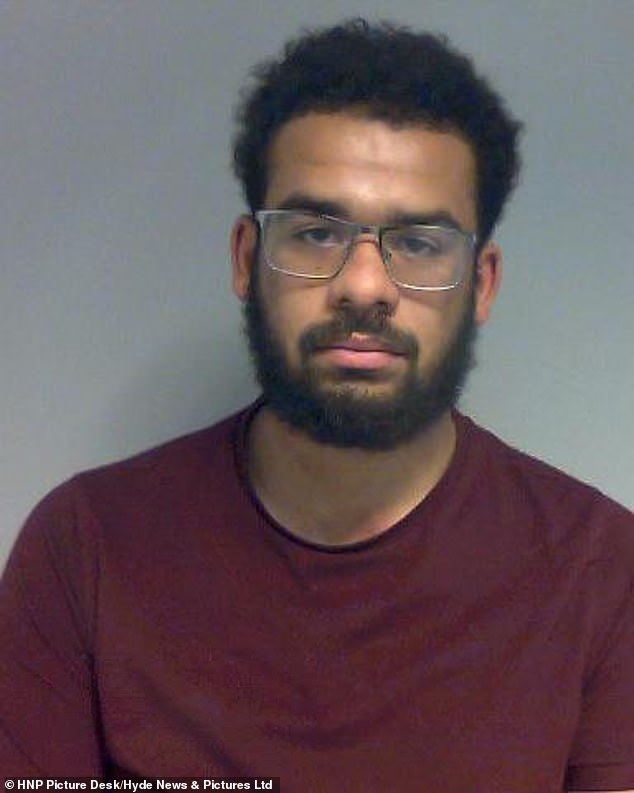 Martin Fleming, 20, admitted a charge of violent disorder in relation to the attack in June last year

The defence barrister told the judge: ‘The mortician had expressed that it was an unusual outcome and it was deeply unfortunate.

‘To Hick’s discredit, he took a knife with him. To his credit, he discarded the knife. It wasn’t knocked out of his hand – he threw it.’

It was revealed that Fleming, who was previously diagnosed with autism, entered the scuffle for all of two seconds – he was seen carrying a bottle by the neck to the scene, however it was shown by CCTV footage that the bottle was not used and it was not clear he took part in any of the violence at all.

Sentencing both men, Judge Paul Dugdale said: ‘Two men very foolishly met up for unlawful violence. One has a baseball bat and one has a knife. Violence ensues and one is killed.

‘If we were in the reverse position then it would have been Mr Robinson in the dock and we would be in the exact same position. That is why the whole thing is such a tragedy.’

He will serve two-thirds of this sentence in custody.

Fleming, of Bideford Spur, Slough, was sentenced to two-and-a-half years imprisonment. He will serve half this time in custody.

‘They both left it until the first day of the trial to offer these pleas and take responsibility for their actions, and Beau’s family have endured many months of anxiety waiting for justice to take place.’