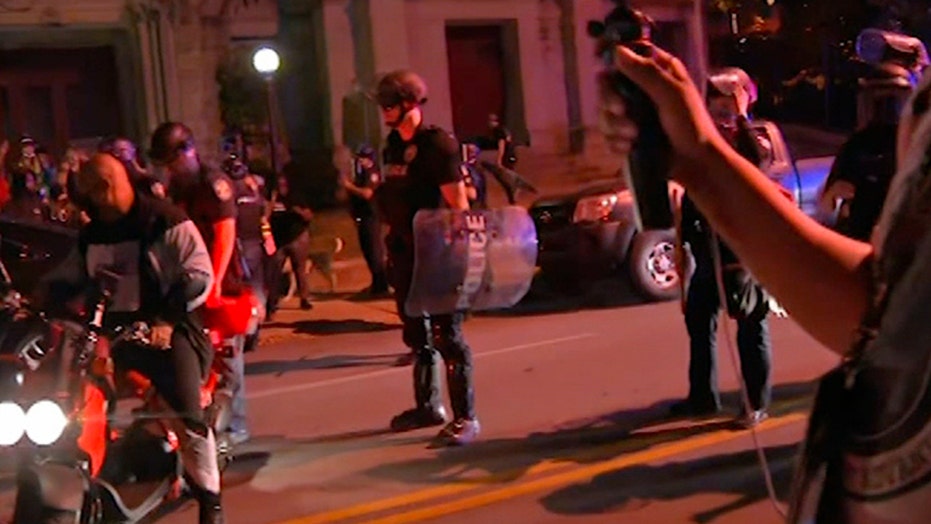 Calls for racial injustice intensify after one of the three officers involved in the Breonna Taylor case is indicted.

Two protesters in Southern California were injured Saturday after a driver allegedly plowed through a demonstration where both President Trump supporters and Black Lives Matter demonstrators had gathered.

The driver in the Yorba Linda incident — about 34 miles southeast of downtown Los Angeles — didn’t stop after driving through the crowd and protesters chased the driver until she was detained by police soon after a crash, the Orange County Register reported. The unidentified suspect was arrested on suspicion of assault with a deadly weapon and attempted murder, the report said.

The victims were taken to a hospital with non-life-threatening injuries, Carrie Braun, a spokeswoman for the Orange County Sheriff’s Department, said.

The driver had been involved in the protest but officials didn’t say which side she was supporting. Authorities also declined to identify which side the victims were on, the Register reported, but videos on social media appeared to show the suspect driving through mainly Trump supporters.

Previously, a driver plowed through a Hollywood anti-racism protest on Thursday night, sending at least one person to the hospital.

On Wednesday, a driver was detained in Denver after allegedly plowing a vehicle into a crowd of protesters, reports said.

A Seattle anti-racism protester was killed in July when a driver drove onto a closed freeway where anti-police protesters had congregated.

Protests erupted across the country last week, following a grand jury decision in Louisville, Ky., on Wednesday in which it was announced no officer would be directly charged in the death of Breonna Taylor. One officer was charged with wanton endangerment after bullets entered a neighboring home during a March drug raid.