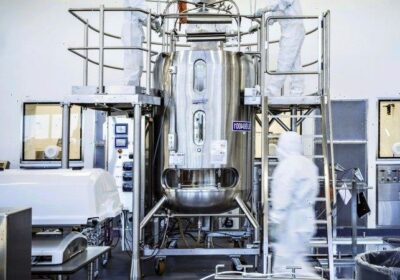 Vaccine development experts say it will take at least $250 million plus the support of a major pharmaceutical company to set up mRNA manufacturing in Australia, cooling hopes of a local jab in the next year.

Manufacturing a vaccine under the tightly controlled conditions demanded by medical regulators is an enormous, costly and difficult challenge that only a few companies globally are capable of. 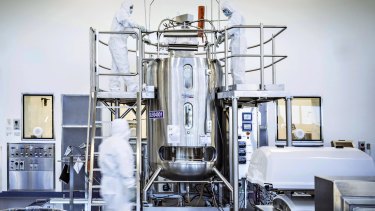 CSL’s Broadmeadows lab, where it is manufacturing the AstraZeneca vaccine.Credit:Chris Hopkins

However, since the start of the pandemic, big pharmaceutical companies have been pulling out of manufacturing in Australia.

Only two companies – Pfizer and Moderna – make COVID-19 mRNA vaccines that have been approved for use anywhere in the world. Pfizer has already ruled out making its vaccine in Australia in the short term. Moderna did not return a request for comment.

But Pfizer is exiting two factories, while CSL has repeatedly said Australia is not an attractive location for commercialising scientific discoveries.

The replacement of the minister responsible for driving the strategy with former Attorney-General Christian Porter has cast doubt over the government scheme.

One local pharmaceutical company looking to develop mRNA manufacturing capacity has been left deeply frustrated after trying to access assistance.

“We’re completely moving in the wrong direction,” said Trent Munro, one of Australia’s most experienced biotech and biopharmaceutical experts. Professor Munro led efforts to develop and manufacture the University of Queensland’s vaccine, which did not make it past clinical trials.

“Why are companies pulling out of manufacturing in Australia, rather than coming in?

“Australia needs to find ways of attracting more industry here. We need the financial incentive, but we also need the business incentive to bring the companies here to do the work.”

Science and health explained and analysed with a rigorous focus on the evidence. Examine is a weekly newsletter by science reporter Liam Mannix. Sign up to receive it every Tuesday.

The Victorian government committed $50 million to local mRNA vaccine manufacturing in April and a scientist closely involved in the project claimed at the time that would be enough to start making jabs within a year.

However, Professor Munro said the investment was not enough to result in commercial manufacturing.

“The money is only one part. You need the operational partner to do that. And that’s what I haven’t seen yet,” he said.

“In simple terms, we know what all the steps are [to make a vaccine]. But it’s like saying you can go into a Michelin-star restaurant and make the dish.”

That operational partner, at least in the short term, won’t be Pfizer, which is focussing on current operations.

“At this time we are not in discussions for any additional manufacturing outside these established supply lines for this vaccine,” a company spokeswoman said.

“Once the pandemic supply phase is over and we enter a phase of regular supplies, Pfizer will certainly evaluate all additional opportunities available.”

MRNA vaccines contain snippets of genetic code that, harnessing the body’s own protein factories, makes copies of the spike protein SARS-COV-2 uses to infect our cells. Our immune system spots those copies and develops antibody defences against them.

Local manufacturing would require setting up a global supply chain. Pfizer’s vaccine is made up of more than 280 components – many currently in short supply – imported from 19 different countries.

But Pfizer says it is not divesting from Australia and plans to invest $140 million in its Melbourne facility over the next decade.

In October last year, British vaccine manufacturer GlaxoSmithKline announced it would shut down its 300-person manufacturing plant in Melbourne.

In 2014, Australia’s home-grown pharmaceutical giant CSL picked Switzerland over Australia for a new $500 million plant, despite that country’s high labour costs and strong currency. The plant manufactures therapies based on research done by CSL in Australia.

“The big problem that new and existing players face in Australia is commercialising the intellectual property created here,” said Paul Chamberlin, a principal with TG Endeavour, which has been engaged by CSL to lobby the federal government on the issue.

“Most of our major competitors – Switzerland, the UK, India and Singapore for example – have IP [intellectual property] incentive tax rates, commonly known as a ‘patent box’. Many others are considering it too.

“Creating such an incentive here would decrease the flow of Australian medical IP overseas and underpin the growth of advanced manufacturing jobs, infrastructure investment and sovereign self-reliance in critical medicines, vaccines and other health equipment and supplies.”

The Department of Industry, Science, Energy and Resources did not respond to emailed questions before deadline.

Chief executive Ian Wisenberg is now hunting for new opportunities for the 4600-square-metre, Therapeutic Goods Administration-approved pharmaceutical manufacturing facility. He said it could be used to make key components of an mRNA vaccine for an investment in the range of $90 million.

“We have a gem in Adelaide, with the facility, the capability, the expertise. This is something we’re saying, we have the ability, we can help,” he said.

Mr Wisenburg said he had been approached by both the federal government and consultants McKinsey to assess his factory.

The federal government had asked him to approach Pfizer to see if it might be possible to secure an Australian licence, he said. “I clearly do have [Pfizer’s] ear and the inside track.”

Each has been unsuccessful.

“Australia has fallen behind in manufacturing,” he said.

“My frustration, frankly, with this whole situation … I am used to getting things done. There is great intent around that Modern Manufacturing Initiative. I just don’t know it’s being done in the most efficient manner.

“We have gone through a whole heap of different applications to try to leverage government funding that has been put out there, but it seems like there is a whole bunch of effort for very little reward.”