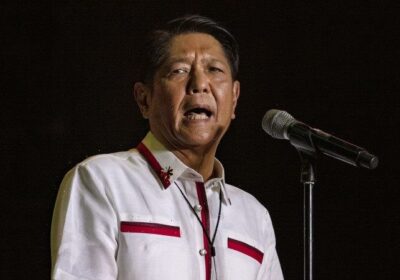 Manila: Ferdinand Marcos jnr, the son and namesake of the Philippines deposed late dictator, is headed for a landslide win in the country’s presidential election.

Tens of millions of Filipinos braved scorching heat and hours-long queues to vote on Monday in what was cast as the most consequential leadership contest in the south-east Asian archipelago for decades. 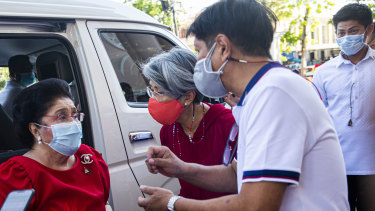 With more than 70 per cent of ballot results transmitted from polling stations around the nation, the 64-year-old former senator, congressman and governor had received 24.1 million votes with Robredo trailing on 11.4 million. Boxing icon Manny Pacquiao was a distant third on 2.3 million.

Marcos’ provisional return had already exceeded the 16.6 million votes achieved by Rodrigo Duterte when the shoot-from-the-hip strongman was triumphant in the Philippines’ previous presidential election in 2016.

Duterte’s daughter Sara has been instrumental in helping drive Marcos streets ahead of his rivals after joining forces with him to run as vice-president rather than vying for the top job herself.

She enjoyed an even bigger lead in the separate vice-presidential race based on preliminary figures, with 23.9 million compared to 7.2 million polled by Robredo’s running mate Francis “Kiko” Pangilnan.

The Philippines’ new president and vice-president may not be declared for another fortnight when Congress resumes and won’t be sworn in until June 30. But the gulf between Marcos and the rest of the field on the unofficial tally indicates that is now all but a formality.

There are ongoing attempts to have him disqualified based on a conviction in 1997 for failing to file tax returns and COMELEC will announce a ruling on the latest application on Tuesday. But should they continue to fail, Marcos is headed for an astonishing return to the Malacanang, the presidential palace occupied by his parents Ferdinand Marcos snr and Imelda for 21 years until the former’s ousting in a people’s uprising in 1986.

As Marcos and Sara Duterte devotees began to celebrate outside their campaign headquarters in Manila on Monday night, Marcos said he was waiting for the final count but thanked supporters. 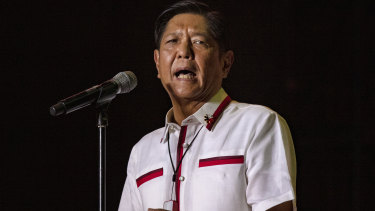 Marcos lost narrowly to Leni Robredo in the vice-presidential race in 2016.Credit:Getty Images

“If I win, I expect that your help and trust will not fade. We have a lot of things to do for our future,” he said.

Election day in the Philippines had earlier been affected by malfunctioning vote-counting machines in some precincts as tens of millions of voters took to polling stations at schools.

Marcos himself voted at the Mariano Marcos Memorial Elementary School, named after his grandfather, in his hometown of Batac in Ilocos Norte province.

Among his supporters were Cherie DeAsis, an online casino dealer, and her mother Maria Leonara, a housewife, who cast their votes in the Tondo district of Manila, an area that featured heavily in the deadly war on drugs undertaken by Duterte, whose constitutionally limited single six-year presidential term ends next month. 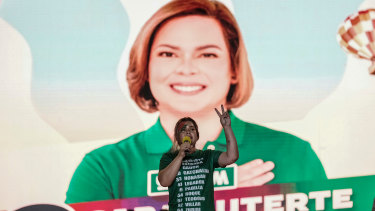 Sara Duterte had been the presidential frontrunner before deciding to vie for the vice-presidency instead.Credit:Bloomberg

They live with another family in a 42-square metre tenement in a poor area of the capital that was built when Marcos snr ran the country under martial law.

His brutal dictatorship was marred by rights abuses such as torture, killings and forced disappearances as well as plundering of as much as $US10 billion ($14 billion) in state funds.

Critics have denounced disinformation networks on social media they say have gloried his legacy. Yet as successful as they might have been, the results also reflect a wider disillusionment with the efforts of post-Marcos governments associated with elites.

Maria Leonara, the housewife, said she remembers martial law as a time in Philippines history when the poor was looked after and “everything was more disciplined”. 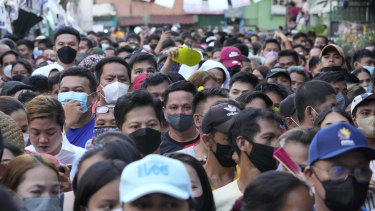 People wait in line to vote at a school used as a polling station in Tondo district of Manila.Credit:AP

“Life was better at the time,” she said. “After 36 years [since Marcos snr ruled] nothing has happened.”

In a nation where 23 per cent of people are categorised as poor, her daughter Cherie hopes Marcos jnr governs like his father: “He’s a visionary man,” she said. “Normally, people like me inherit part of the character of our mum. So, we believe Bongbong Marcos inherits a part of his parents.”

In more affluent Makati in central Manila, Helen Austria, a building administrator in Makati, said she was supporting Marcos because he was on the same ticket as Sara Duterte.

The early count indicates Marcos will avenge his loss to Robredo in the 2016 vice-presidential election, a narrow defeat by just 200,000 votes that he sought unsuccessfully to overturn. 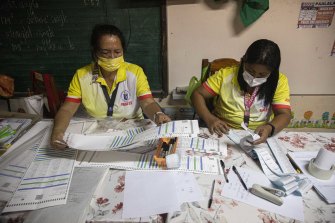 The two have a bitter rivalry and embody a political chasm that has existed more than four decades, with Robredo allied with the movement that toppled the elder Marcos.

About 65 million Filipinos were eligible to cast ballots on Monday to decide on the successor to Duterte, plus thousands of other posts, from lawmakers and governors to city mayors and councillors.

COMELEC declared the election to have been “relatively peaceful” and documented 15 security incidents, including what police said was the killing of three members of a peacekeeping force near a polling station in the south.