Lake Bunyonyi: Samuel Muriisa thinks he is ready for Ebola, but he is not.

Muriisa, 74, is the most widely respected omushaho wekishaka, or traditional healer, in this area. He is aware — but only vaguely — that Ebola is raging in the Democratic Republic of Congo, whose border is just 20 miles away.

"Let it stay in Congo," he said. "We seldom see Congo people here. Let it not come." 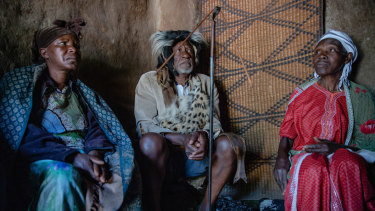 Jolly Twinomuhwezi, 60, one of his three wives who acts as his triage nurse, said she would send away anyone with bleeding eye sockets or fingernail beds, which she had heard were the chief Ebola symptoms.

She is dangerously wrong; most Ebola victims never hemorrhage, and in those who do, it is a late-stage symptom.

Medical experts worry that such combinations of misinformation and wishful thinking are common among traditional healers who, like it or not, are the front lines of rural African medicine.

Those concerns are intensifying as the epidemic in Congo spirals out of control. Last week, Doctors Without Borders suspended its work after violent attacks on two of its treatment centers.

Across the African continent, according to the World Health Organization, there are about 80 times as many traditional healers as there are medical doctors. Millions of Africans consult healers but, studies suggest, usually do not admit it if they see doctors, too.

In Congo, doctors now fighting Ebola believe that many of their patients first get infected while visiting such healers. They may arrive at the home of someone like Muriisa with malaria, or even a cough or other minor problem, but then end up lying next to someone with undiagnosed Ebola.

In the 2014 West African outbreak, which infected more than 11,000 people, the death of a prominent healer was a crucial "super-spreader event", linked to over 300 cases.

That healer, who lived in rural Sierra Leone, died after catching the virus from one of her patients. Hundreds of relatives and admirers came from many miles away for her funeral and helped wash her body, which was presumably teeming with virus. 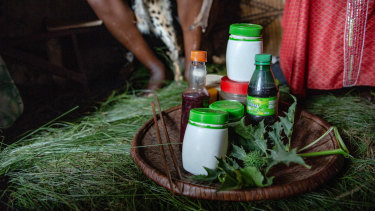 Items used by Muriisa, a herbalist who practices traditional medicine, in the hills of Kabale District, in western Uganda.Credit:The New York Times

They then returned to their homes in Guinea and Liberia, helping ignite the worst Ebola epidemic in history.

Muriisa discussed his practice with a reporter from The New York Times and visiting members of a Canadian medical charity, Bridge to Health.

The Canadians were offering routine medical and dental care in nearby villages, not doing Ebola-related work. Nonetheless, their infectious disease specialist, Dr. Sasan Hosseini-Moghaddam, made sure triage nurses were on the alert for the virus.

Any patient with a fever who had visited Congo, or had contact with someone who did, should be isolated and not touched, Hosseini-Moghaddam told the nurses. Then the patients should be asked about diarrhoea, vomiting, joint pain, red eyes and difficulty breathing or swallowing — all potential signs of Ebola.

Of course, Muriisa has no way to do an Ebola test, or even one for malaria, which, when severe, can be confused with Ebola.

Uganda's health ministry has not given him one of its brightly colored posters illustrating Ebola symptoms that can be found tacked up at border posts and conventional clinics.

His office is a thatched mud hut decorated with shields and antelope horns. It is at the top of a steep hill above a boat landing on a reed-choked shore — so steep that his grandsons keep a dozen polished staffs stuck in the ground to help panting visitors climb it.

To meet patients, he tops his normal attire — a corduroy jacket and shorts — with a cloak of what appears to be serval cat fur and a headpiece of black and white monkey hair.

Local residents said the healer was correct that few Congolese ever visit Lake Bunyonyi, which is at an altitude of 6,500 feet and surrounded by farmers, crawfish-gatherers and lakeside resorts (including Idi Amin's former summer home). 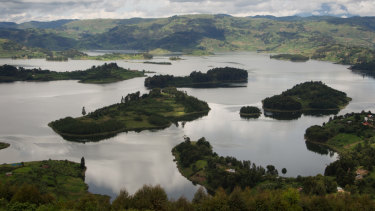 Most Congolese who traverse the border are traders headed straight for Kampala, Uganda's capital, to buy goods for resale in Congo. Also, nurses stationed at the frontier are supposed to take temperatures and turn back anyone with a fever, and Ugandan bus lines have stopped serving the Congolese cities hit hardest by Ebola, Beni and Butembo, which are 200 miles to the northwest.

But borders are permeable, and Africans who fall seriously ill may travel long distances to see the healer in their home villages, because they trust them.

Healers can spend time with patients and speak their home dialects. Muriisa's first language is Rukiga (pronounced rue-CHEE-ga). Also, healers accept payment in the currencies of the poor: vegetables, alcohol, chickens and goats.

Some very grateful patients, Muriisa said, have even given him a daughter. "She then becomes my daughter," he explained. "And maybe one of my sons will marry her."

Herbalists are also trusted because some of their teas, ointments and powders genuinely do alleviate common ills such as allergies, nosebleeds, arthritis pain or toothache.

And they sell potions to ward off curses such as lightning strikes or jealous neighbors, disasters for which Western medicine offers no remedies.

(Muriisa is an herbalist, not an omufumu, who is paid to put curses on people, according to Innocent Tumusiingize, a local dentist who led the visit and translated. The two professions have parallels elsewhere; in southern Africa, for example, they are known as sangomas and nyangas.)

Local people with HIV do come to him, Muriisa said — sometimes right after getting a positive blood test at a clinic.

He admitted that he could not cure AIDS but claimed to be able to slow it down — to "make the virus drunk and weak"— with a concoction made from the local omusikamoori tree.

He does not discourage his patients from taking conventional HIV drugs. Some take them as well as his treatment, he said, but they rarely admit it.

"They fear arrest," he said. "Because the government says herbs don't work and should not be used."

He cannot cure cancer, he admitted, but he does treat snake bites. He also treats mental illness. 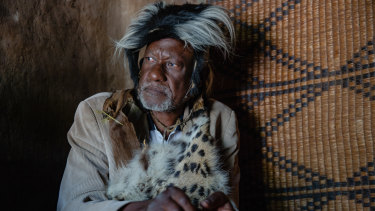 Muriisa has no way to do an Ebola test, or even one for malaria, which, when severe, can be confused with Ebola.Credit:The New York Times

Typically he conspires with the family of an emotionally disturbed person to knock him or her out with a few dark seeds from the rweziringa, or thorn apple, shrub.

According to a plant reference book he keeps, it is Datura stramonium, known in the United States as jimsonweed, a powerfully toxic and hallucinogenic member of the nightshade family.

"In that state, they say many things," he said. "And I can tell from their words whether it is demons or a curse making them ill, and I can decide how to treat them."

For seriously ill patients, he has two tests to predict whether he can cure them.

One requires balancing a small horn on a vertical stick; the other involves boiling a soda bottle full of green liquid to see if it changes color.

If both tests indicate the patient will die, Muriisa does not tell them, because it would be disheartening. Instead, he advises them to go to the local public hospital.

His herbal knowledge came from his father, whose grave is just outside the hut and who was the local healer for decades until his death at age 92.

But the spiritual aspect of his power, Muriisa explained, comes from an ancient African god named Kazoba Nyamahanga (which means "little sun god" in Rukiga).

Kazoba, he said, sends villagers dreams indicating who their next healer will be, and grants the chosen one the power occasionally to predict the future.

He also worshipped the Christian god, he said: "I was baptized Samuel, and I go to church — but for me it's more like a club, someplace to see friends."

As the visit ended, Muriisa stood outside with his guests as they waited for their boat. His first wife, Joy Mazooba, 65, brought over one of their grandchildren.

"Her teeth are too brown — could you look at them?" she asked the doctors and dentists through a translator. "And I think something is wrong with her eyes."