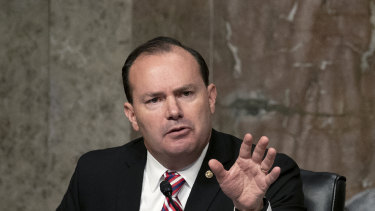 Lee, a conservative who sits on the Senate Judiciary Committee and has tested positive for COVID-19, tweeted several times during the vice presidential debate at the University of Utah after welcoming Pence and Harris to his home state.

"We're not a democracy," Lee tweeted at one point. Then, in the early hours of Thursday, came a longer message that drew the most criticism: "Democracy isn't the objective; liberty, peace, and prospefity (sic) are. We want the human condition to flourish. Rank democracy can thwart that."

Democrats quickly tied Lee's remarks to the November election, in which Republicans are in danger of losing their US Senate majority as well as the White House.

"Dear @SenMikeLee: I note that you were elected by the people of your state. America is a representative democracy. That means we are also a democracy," Democratic Representative Ted Lieu replied on Twitter.

"But I sure hope you can get the @GOP to adopt your view as a campaign slogan. It's a real winner," he added.

Neera Tanden, a former Obama administration official who advised Democrat Hillary Clinton's 2016 presidential campaign, tweeted: "Mike Lee coming out against democracy. If this isn't a warning about authoritarianism, I don't know what is."

A Lee spokesman defended the senator by quoting President James Madison, one of the leaders of the American revolution against the British monarchy, who went on to serve as the country's fourth president.

Madison, who wrote extensively about government as one of the authors of "The Federalist Papers" defending the then-new US Constitution, at one point wrote "democracies have ever been spectacles of turbulence and contention; have ever been found incompatible with personal security or the rights of property."

Swept into the Senate by the conservative Tea Party wave of 2010, Lee rankled Republicans four years ago by calling on Trump, then the Republican presidential candidate, to step aside over his lewd conversation caught on the Access Hollywood tape.

Lee has since become a Trump supporter and strongly backs the president's Supreme Court nominee, Amy Coney Barrett, expected to face scrutiny in the Senate Judiciary Committee starting on Monday.

Lee's spokesman said the COVID-19-stricken lawmaker "is feeling better every day … and plans to participate" in Barrett's confirmation hearings.