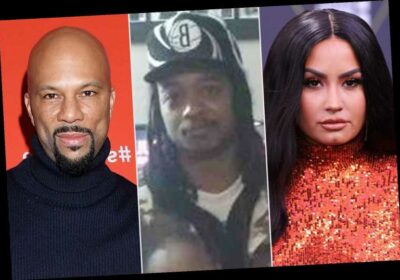 Celebrities are sharing their frustrations after it was announced that no charges will be filed against the Wisconsin police officer who shot Jacob Blake.

On Tuesday, stars including Demi Lovato, Common, LeBron James, among many others, posted on social media after the Kenosha County District Attorney, Michael Graveley, announced that Rusten Sheskey, the white police officer who shot Blake several times, will not face criminal charges in the shooting.

Blake, who is Black, was hospitalized on Aug. 23 after the Kenosha County officer shot him multiple times in the back while responding to what authorities said was a domestic disturbance. Blake's children were in the car and witnessed the shooting.

The 29-year-old then spent six weeks in the hospital before being moved to a spinal injury rehabilitation center in Chicago. He remains paralyzed from the waist down.

Common also shared the news story on Twitter alongside a quote from Dr. Martin Luther King Jr. which read, "An unjust law is no law at all," the rapper, 48, wrote.

James, 36, also spoke out following the news, calling it a "blow to the heart and to the gut."

"We gotta continue to stay strong, continue to believe in each other and continue to push for the greater change and greater good," the NBA star said in a video clip.

Rosanna Arquette, 61, later shared her outrage on Twitter, writing, "Letting off the cruel racist officers who shot Jacob Blake 8 times in his back in front of his children leaving him paralyzed is the horror of Racism ."

The actress added, "It's despicable beyond measure .they have announced this today because it’s planned and timed to create violence."

Andrew Yang, 45, questioned the D.A.'s decision in a tweet which read, "Jacob Blake was shot 7 times in the back in front of his children on tape. How can there be no charges against the police officer?"

Rep. Cori Bush then added that she believes that not charging the officer acts as "a green light for police across the country to continue devaluing, dehumanizing and destroying Black lives."

During a news conference Tuesday, Graveley said the officer would be able to successfully argue self-defense in front a jury. He said that his decision was based on evidence that could not be seen in cell phone video of the incident.

Graveley also noted that a jury would be required to examine the case from Officer Sheskey's point of view.

"It's really evidence about the perspective of Officer Sheskey at each moment and what would a reasonable officer do at each moment," Graveley told reporters. "Almost none of those things are answered in that deeply disturbing video that we’ve all seen. Officer Sheskey felt he was about to be stabbed."

Sheskey and two other officers at the scene, Vincent Arenas and Brittany Meronek, were placed on administrative leave.

Blake's shooting was captured in a bystander video that went viral, sparking numerous protests over police brutality and racial injustice. Two people were killed in a Kenosha demonstration on Aug. 25 and the suspect, 17-year-old Kyle Rittenhouse, was subsequently charged with homicide.

The protests followed earlier demonstrations over the killings of other Black citizens including George Floyd, Breonna Taylor, and Ahmaud Arbery.

To help combat systemic racism, consider learning from or donating to these organizations: