Delta expected to push herd immunity threshold above 80 per cent 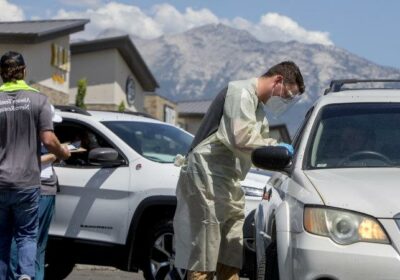 Washington: The spread of the Delta coronavirus variant has pushed the threshold for herd immunity to well over 80 per cent and potentially approaching 90 per cent, according to an Infectious Diseases Society of America briefing on Tuesday (Wednesday AEDT).

That represents a “much higher” bar than previous estimates of 60 per cent to 70 per cent, because Delta is twice as transmissible, said Ricardo Franco, an assistant professor at the University of Alabama at Birmingham. 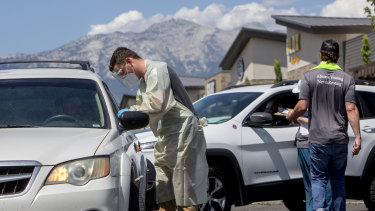 “It is becoming clear that this is a very dangerous, way more dangerous virus than the original one,” Franco said.

Herd immunity is based on the idea that when a certain percentage of the population has been vaccinated against the virus or gains immunity by a previous infection, it helps protect the broader population and reduce transmission.

Nearly 60 per cent of Americans have received at least one dose of a coronavirus vaccine, and about 50 per cent have been fully vaccinated, representing about 165 million individuals, according to CDC data. Some 35 million people in the US, meanwhile, have tested positive for the virus over the course of the pandemic.

Dr Anthony Fauci, the chief medical adviser to President Joe Biden, said the US could be “in trouble” entering the autumn unless a large portion of unvaccinated Americans decide to get the shots, with the real possibility a new variant emerges that challenges the effectiveness of existing vaccines. 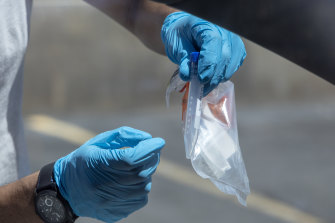 A healthcare worker shows a resident how to complete a COVID-19 spit test at a Utah County Health Department drive-thru testing site in American Fork, Utah.Credit:Bloomberg

“What we’re seeing, because of this increase in transmissibility, and because we have about 93 million people in this country who are eligible to get vaccinated who don’t get vaccinated — that you have a significant pool of vulnerable people,” said Fauci, who is the head of the National Institute of Allergy and Infectious Diseases.

“And so when you look at the curve of acceleration of seven-day averages of cases per day, it is going up in a very steep fashion,” he said.

As of August 2, the seven-day rolling average of daily COVID-19 cases was 84,389, according to the Centres for Disease Control and Prevention. 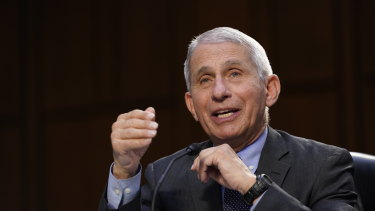 Anthony Fauci, director of the US National Institute of Allergy and Infectious Diseases, fears the virus could mutate into a deadlier strain.Credit:Bloomberg

The Biden administration has referred to the current outbreak as a “pandemic of the unvaccinated,” as the vast majority of people hospitalised with COVID-19 have not taken the shots.

But recent data shows that vaccinated people who still get infected with the Delta variant also have high viral loads and can spread it to others, even when they aren’t showing symptoms or are experiencing mild disease.

“We’re now dealing with, really, a different virus,” he said.

Fauci is hopeful that full approval of Pfizer and Moderna’s two-dose vaccines by the Food and Drug Administration, expected in a matter of weeks, will lead to a “bump” in vaccination rates.

Vaccines take time to work — the two-dose shots are spaced out, and a person is not considered fully vaccinated until two weeks after their second dose — and so the impact would not be immediate to blunt the current surge, Fauci said.

“Even if we vaccinated everyone today, we’re not going to see an effect until the middle to end of September,” he said.

Fauci said that data shows people infected with the Delta variant have viral levels “about 1000 times higher in quantity” than were recorded in people who were infected with the Alpha variant, also known as the British variant, which earlier this year became predominant in the United States.

Studies have emerged in recent weeks indicating that vaccinated individuals are at risk of “long COVID” — a series of conditions associated with infection such as fatigue, shortness of breath and loss of smell that can last for weeks or months — even if they are largely protected from severe illness and death, Fauci said.

Despite the extraordinary contagiousness of the Delta variant, it can still get worse, Fauci said.

He fears the virus is being given “ample” opportunity to morph even further into a deadlier strain that could diminish the effectiveness of vaccines. Continued spread provides the virus more opportunities to mutate, he said.

“If we don’t crush the outbreak to the point of getting the overwhelming proportion of the population vaccinated, then what will happen is the virus will continue to smolder through the fall into the winter, giving it ample chance to get a variant which, quite frankly, we’re very lucky that the vaccines that we have now do very well against the variants — particularly against severe illness,” Fauci said. “We’re very fortunate that that’s the case. There could be a variant that’s lingering out there that can push aside Delta.

“If another one comes along that has an equally high capability of transmitting but also is much more severe, then we could really be in trouble,” he said. “People who are not getting vaccinated mistakenly think it’s only about them. But it isn’t. It’s about everybody else, also.”