First picture emerges of new Russian PM Mikhail Mishustin’s wife as questions are raised over their incredible wealth after it is revealed she earned £9.6million in less than a decade

The first picture of the wife of Russia’s new Prime Minister emerged on Friday as critics demanded to know where the family acquired their fortune.

Mikhail Mishustin was the surprise nominee put forward by Vladimir Putin after the shock resignation of top parliamentarian Dmitry Medvedev earlier this week.

The father-of-three was confirmed in a vote Thursday, but was immediately embroiled in financial scandal as critics demanded to know how he had acquired a multi-million pound property portfolio.

Opposition leader Alexey Navalny also pointed out that wife Vladlena had earned almost £10million in 10 years, despite not officially having a job.

‘How is he so damn rich?’ Navalny asked on his blog. 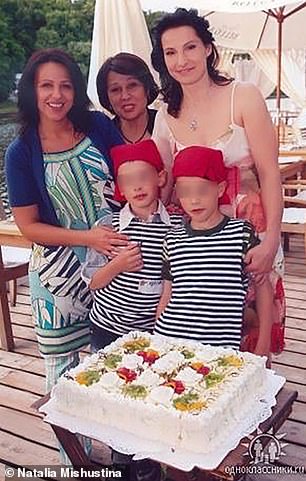 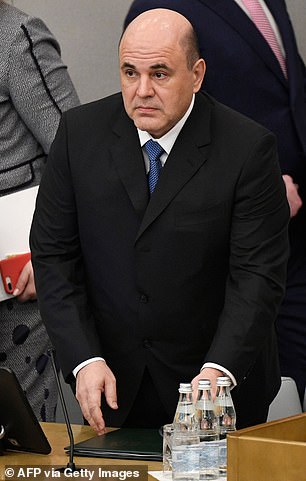 The first picture of Vladlena Mishustina (left, standing on the right), wife of Russia’s new prime minister Mikhail Mishustin (right), emerged Friday as questions were raised about their wealth 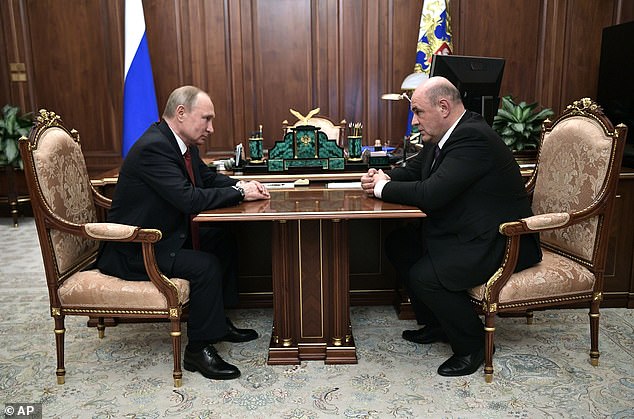 Despite being a unknown apparatchik until his sudden promotion, Mishustin is believed to be the owner of 10,000sq ft mansion on a 60,000sq ft piece of land in Moscow’s Rublyovka district – often named the city’s most expensive.

Similarly sized properties for sale in the same area go for around £7.6million.

Mishustin and his wife Vladlena Mishustina – named after Soviet founder Vladimir Lenin – were listed as owners of the property between 2001 and 2005, according to investigative website Proekt.

But after 2005, while Mishustin was working at the Federal Real Estate Agency, their names disappeared from the records and were replaced by the federal government.

The tactic is common where the owners of a property are keen to obscure their connections to it.

Mishustin has never declared an income that would allow him to afford such a home, the site adds.

Mishustin is also linked with an apartment in Moscow’s upscale Presnensky District, which is best known for the State Museum of Oriental Art and is a 10-minute drive from the Kremlin.

While the exact value of the apartment is not known, it is not uncommon for flats in the area to sell for upwards of £1million. 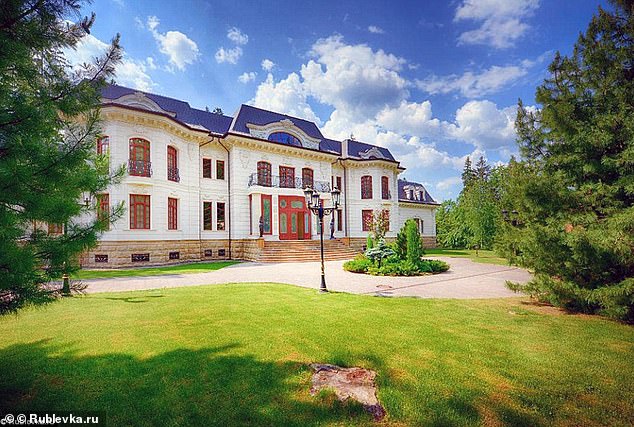 Mishustin, Russia’s former tax chief, is thought to own a 10,000sq ft mansion worth some £7.6million in Moscow’s Rublyovka district – often called the capital’s most expensive (pictured, a similar mansion in the same district) 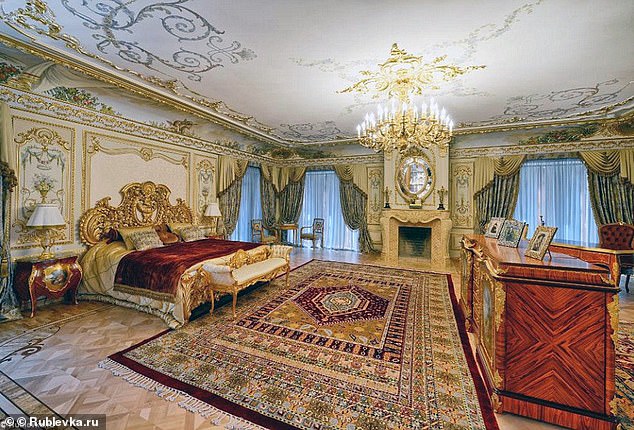 Critics point out that Mishustin has owned the property since 2001, shortly after he joined the government, despite never declaring an income to match (file image of a similar home) 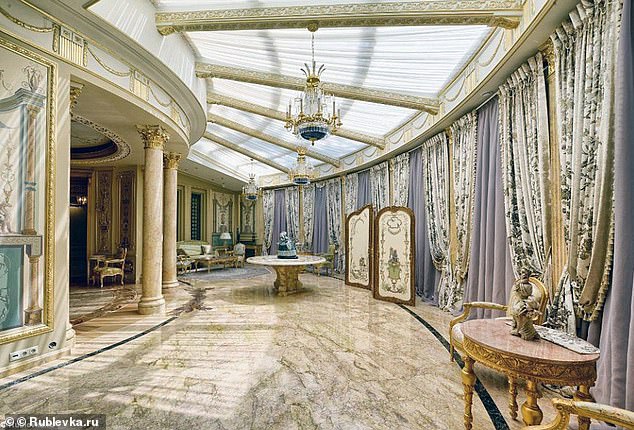 As well as the mansion (file image), Mishustin has been linked with an apartment in Moscow’s Presnensky District, where it is not uncommon for flats to sell for more than £1million

Questions were also raised over £10million in income that Vladlena declared over the course of the last decade, without declaring a source for it.

In recent years, she has earned up to four times her husband’s salary, despite having no companies listed in her name.

Strict laws in Russia limit the amount of income that government officials receive, but place almost no limits on the earnings of their families.

Opposition leader Alexey Navalny revealed Vladlena’s income in a blog, writing: ‘Mishustin has been a “servant of the people” for 20 of the last 22 years.

Ilya Ponomarev, a former politician who has known Mishustin for 15 years, denied that he was corrupt – suggesting that he earned millions from IT ventures that he was involved with in the 1990s.

Mishustin is known to have worked as laboratory head for a non-profit organisation in the early Ninties, before joining the tax bureau in 1998,

He then quietly worked his way up Russia’s power structure, being named chief of the tax office in 2010, before being thrust into the spotlight with Putin’s announcement on Tuesday.

Mishustin is a father-of-three (pictured left to right, sons Alexy, Alexander and Mikhail). It is thought the two eldest attended a prestigious Swiss school, as well as a top Moscow university 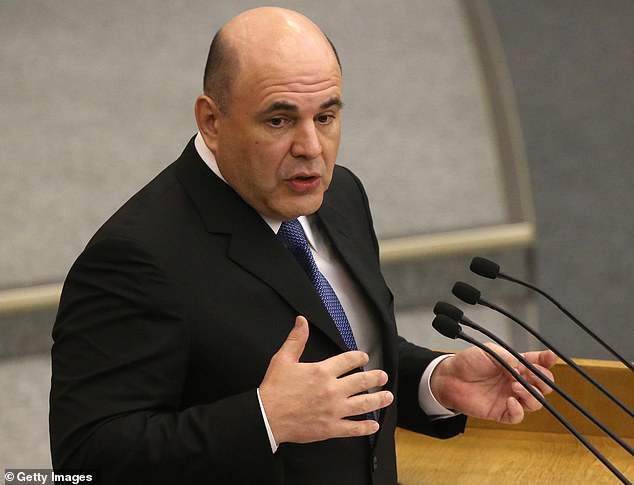 Mishustin began his tenure as Prime Minister by announcing he will reform the tax system, cut red tape, and improve life for ordinary Russians

It was claimed that his father Vladimir was a Soviet-era KGB spy – like President Vladimir Putin – and worked undercover at the Soviet embassy in Bulgaria.

Mishustin Sr is also known to have worked for state airline Aeroflot, possibly as a cover for espionage.

The appointment of Mishustin as Prime Minister was such a shock that it took the man himself by surprise, who said he ‘couldn’t sleep’ after hearing his name mentioned.

The country’s parliament approved his appointment Thursday without a single vote against, as he vowed to modernise Russia’s tax system, cut red tape and improve life for everyday people.

Putin subsequently fast-tracked work on constitutional changes that could keep him in power well past the end of his term in 2024 while lawmakers quickly sealed his choice for new prime minister.

Speaking to a working group created to draft constitutional changes, Putin cast his proposals as a way to strengthen parliament and to bolster democracy.

Kremlin critics described the proposed changes as an attempt by Putin to secure his rule for life.

The Russian leader proposed the sweeping amendments to the country’s constitution in Wednesday’s state of the nation address.

Hours later, he fired Prime Minister Dmitry Medvedev, who had the job for eight years, and named tax chief Mikhail Mishustin to succeed him.

The reshuffle has shaken Russia’s political elites, who were left wildly speculating about Putin’s intentions and future Cabinet appointments.

A constitutional reform announced by Putin indicated he was working to carve out a new governing position for himself after his current six-year term ends in 2024, although it remains unclear what specific path he will take to stay in charge.

The former KGB agent has been in power for two decades, longer than any other Russian or Soviet leader since Josef Stalin, who led from 1924 until his death in 1953.

Under the law now in force, Putin must step down when his current term ends.