Home » Crackdown on youth crime a ‘Band-Aid at best, a death sentence at worst’

Crackdown on youth crime a ‘Band-Aid at best, a death sentence at worst’

When legal educator Mililma May arrives at Darwin’s Don Dale Youth Detention Centre to teach 10- to 17-year-olds their legal rights, she often ends up using baby talk. Many of the children she visits are primary school children the same age as her cousins and siblings.

Arriving recently in H-block, the centre’s high security area, Ms May, who works for the North Australian Aboriginal Justice Agency, was approached by a “little 11-year-old boy” holding a frog on his pinky. “He was like, ‘Miss, look at this little frog’. My voice went to baby [voice], and I said, ‘Bubba, where did you find him?’.” 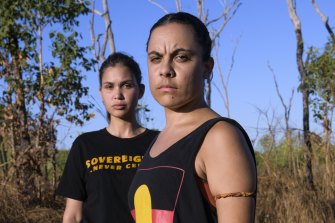 Mililma May, front, and Sharna Alley are the co-founders of UP: Uprising of the People.Credit:Rhett Wyman

On Monday outside Northern Territory Parliament House, Ms May, the co-founder of new protest group Uprising of the People, addressed a rally opposing the introduction of tough new laws on youth crime. Ms May, a Larrakia woman, said she was “physically sick at the acts of genocide and injustice” that were happening to her people on her country. Nearly all children in detention in Don Dale are Indigenous.

The crackdown follows a rash of youth crimes, particularly in Alice Springs, including one in which an older woman was knocked to the ground as three teens grabbed her bag.

“People don’t want to see youth crime – but locking kids up and throwing away the key is a Band-Aid at best, and a death sentence at worst,” Ms May said.

Coming three weeks after Australia marked the 30th anniversary of the Royal Commission into Aboriginal Deaths in Custody, the amendments – expected to pass this week – have shocked legal experts and children’s advocates. 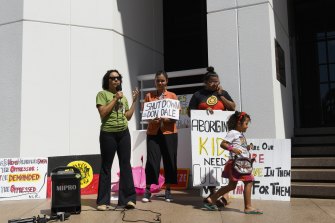 A protest was held outside the Northern Territory’s Parliament House on Monday.Credit:Rhett Wyman

The NT government proposes to make it more difficult to get bail for a large range of common offences, including breaking and entering. It will also reduce access to diversion programs, give more discretion to police and less to the courts, and increase the number of children wearing electronic tracking devices. These changes will result in young people being held longer before appearing before the court, say critics.

It is also expected to result in 30 to 116 more youths detained at Don Dale, with plans to reopen wings to accommodate the increase.

Senior Indigenous lawyer Nick Espie, also at the North Australian Aboriginal Justice Agency, worked for the Royal Commission into the Protection and Detention of Children in the Northern Territory and helped draft its 2017 recommendations. Footage of teenager Dylan Voller shackled to a restraining chair in Don Dale on ABC’s Four Corners prompted the commission. The commissioners found detention should only be used as a last resort for children, and Don Dale should be closed. 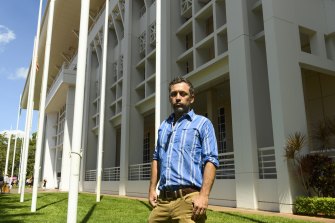 After the report was released, Chief Minister Michael Gunner apologised for failing to care and protect children in its care.

“For this I am sorry. But more than this, I’m sorry for the stories that live in the children we failed.”

“The ink has barely dried on the legislation and [the government] are now ripping it off,” he said. “These [new] laws are fundamentally designed to increase the number of children in detention. It is totally contrary to its commitment to implement the royal commission’s recommendations, and its commitment to bringing about generational change that would keep kids out of prison and implement a therapeutic approach to youth justice.”

A spokesperson for the NT government defended the changes. “These reforms do not diminish the Territory government’s commitment to the royal commission, they address and target a small number of high-volume, repeat offenders while supporting the expansion of community-based youth justice programs, including youth diversion.”

The spokesperson said the government was investing in services to help stop crime before it starts – including youth and family programs, better schools, health and housing.

Olga Havnen, the chief executive officer of Danila Dilba Health Service, which provides primary care at Don Dale, said her medical team had found at least 90 per cent of children in the facility had at least one serious development and cognitive delay.

Many had been in foster care, had experienced serious trauma, and had serious and complex mental and developmental needs. Many had fetal alcohol syndrome disorders, which means they were unable to follow instructions or understand consequences.

The evidence was clear that the experience of incarceration, even for very short periods (including on remand) increased the likelihood of further offending, she said. The world’s best diversion program, Diagrama in Spain, which provides therapeutic services, results in only 20 per cent of participants reoffending after three years. That compares to a reoffending rate of around 70 per cent in the NT within 12 months. 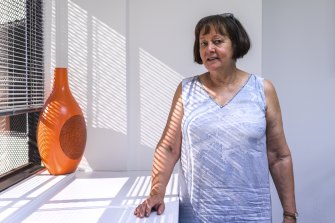 “What they are not getting is that these kids have disabilities, and [some have] cognitive abilities with IQs of 50 to 70,” she said.

Despite recommendations from the NT royal commission, and the United Nations, that detention be used as a last resort for young people, two 15-year-olds currently in Don Dale have been held for nearly a year without being sentenced.

As for the proposal that is expected to result in more teenagers wearing electronic tracking bracelets around their ankles, Ms Havnen said it was a hideous policy.

“Why don’t they just put a ball and chain on these kids?”

To use electronic monitoring devices on children in the NT – where young people mostly wore shorts – was highly stigmatising.

All Australian and New Zealand commissioners for children, including the NT’s acting children’s commissioner Sally Sievers have signed a letter saying the new legislation breaches the convention on the rights of the child and was not supported by evidence, which showed any time in detention was harmful to young people.

Ms Sievers said, “It is really easy to walk into the spider web, it is very hard to get out of it. That’s how the criminal justice system works.“