Covid UK: Calls for FREE lateral flow tests to get UK back to work 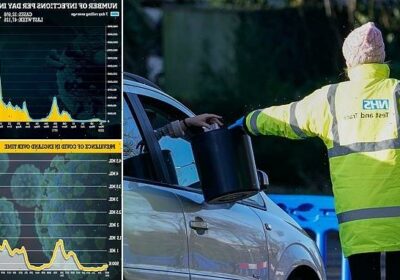 Calls for FREE or cheap Covid lateral flow tests to get Britain back to work: Bosses demand government supply swab kits due to rising staff sickness

Bosses have demanded free or cheap Covid lateral flow tests to get Britain back to work, as a recent surge in virus cases causes havoc with staff sickness disrupting entire supply chains.

The British Chambers of Commerce says up to 75% of companies reported at least one staff member off sick with coronavirus in the last four weeks, with ONS figures showing around one in six bosses paying sick pay to staff to self-isolate when they test positive.

Ministers have refused to bring back free tests after axing them under Boris Johnson’s ‘Living With Covid’ strategy, insisting that the ‘£2billion-a-month’ swabbing regime was ‘simply unsustainable’.

People now have to purchase the swabs from most High Street chemists, where they are available for about £2 each – and a pack of five setting Britons back just under £10.

But this, plus a gradual end to WFH, appears to have caused another surge in Covid cases and staff sickness.

Though UK Health Security Agency figures show that cases have recently plateaued and are now falling, the ONS estimates 3.7million people were carrying the virus on any given day in the week ending April 9 – a near 9% fall on the record 4.1million the previous week. 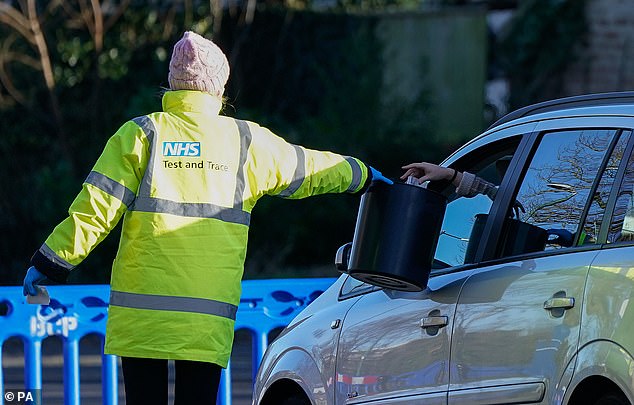 A member of the NHS Test and Trace collects a sample from a member of the public at the drive-thru Covid-19 testing site on Hawkwood Road in Bournemouth, February 5, 2022 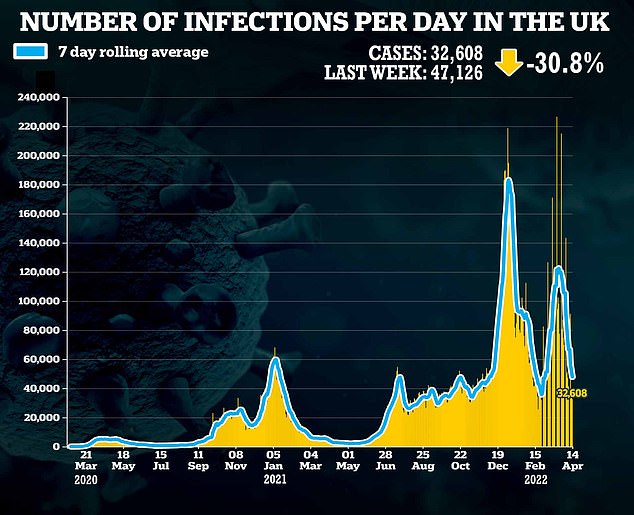 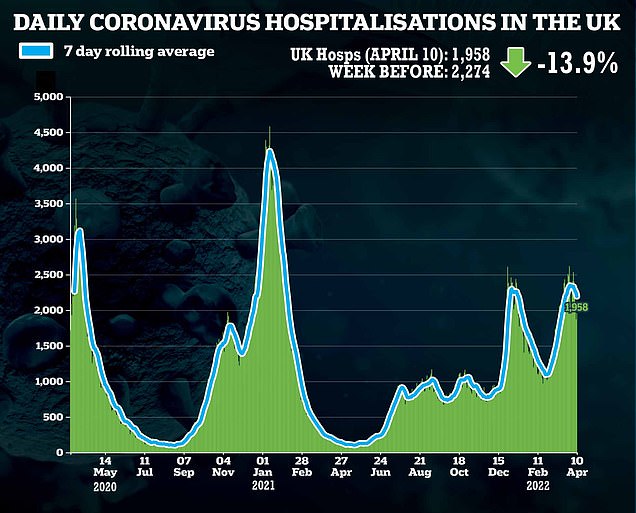 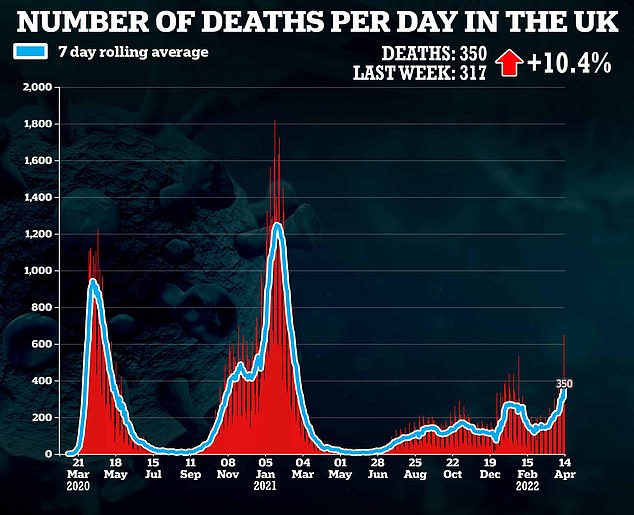 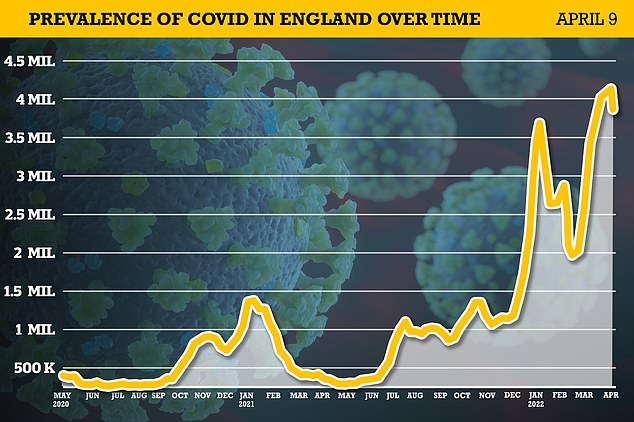 The Office for National Statistics’ ( ONS ) weekly surveillance report estimates 3.7million people in England were carrying the virus on any given day in the week ending April 9

Many employees are trying to persuade their managers to allow them to work from home more because of rising fuel prices, new research suggests.

A survey of almost 3,000 workers found that nine in 10 are pushing for more remote working amid the cost-of-living crisis.

Recruiter Randstad said its findings follow huge increases in the cost of petrol and diesel in recent months.

Chief executive Victoria Short said the Chancellor’s recent announcement of a cut to fuel duty has failed to bring costs down.

‘Following Russia’s invasion of Ukraine, the International Energy Agency recommended its members introduce emergency measures to restrain demand, including working from home. Well, workers here are ahead of the game.

‘The rise in fuel prices is a much bigger blow to workers in Northern Ireland and Wales than to those in London.

‘Londoners have public transport options, subsidised by the British taxpayer, that aren’t available in other parts of the country.

‘For people who have to drive, being hit by massive fuel bills to travel to work, while seemingly subsidising London’s transport infrastructure must feel pretty painful.

‘On top of that, train passengers have just suffered one of the worst periods of cancellations ever due to staff shortages – so that’s not exactly a reliable option either.

‘If the government wants to encourage people back to the office and open up city centres, it needs to look at cutting VAT on petrol and diesel.’

The Government said it recognised the impact of rising costs and had given firms £400 billion in Covid support.

But Jane Gratton of the BCC said Covid, paired with rising costs, meant this was a ‘precarious time’ for business.

The organisation, which which represents tens of thousands of British businesses, has said that free or lower cost testing is necessary to ensure that both staff and customers are kept safe.

Meanwhile the Federation of Small Businesses says one in seven businesses they represent cannot trade as they should at the moment, particularly in hard-hit hospitality settings,

Legal expert Laura Kearsley said: ‘Most businesses were glad to see the back of formal regulations but in a way they were a comfort blanket with someone making the decision for you.

‘Now businesses have more discretion, but that brings a headache in itself for them.’

Sanjay Aggarwal, who runs Spice Kitchen on the outskirts of Liverpool, said that they have had to shut down production in the warehouse for two weeks at a time recently due to rising cases.

The company, which blends and packages ingredients for gifts and subscription deliveries, has 15 staff split between the office, and others blending and bagging spices on the shop floor.

He told the BBC: ‘The guidance is not totally clear and it’s tricky for businesses, having to make up their own rules. It now comes down to leadership teams like myself to come up with the right requirements for staff.’

A Government spokesperson said: ‘Employers still have a duty of care to their staff, so they should take steps to prevent infection in the workplace, meaning if someone is displaying Covid-19 symptoms or has tested positive, they should be considered sick and stay at home to avoid contact with others.

‘We recognise the impact rising costs will have on businesses of all sizes and we have backed businesses throughout the pandemic with an unprecedented package of support including VAT cuts, business rates holidays and government backed loans worth around £400billion.’

NHS leaders and experts have been calling for the return of Covid curbs including masks and outdoor mixing.

Daily data shows 27,283 cases were logged in England on Thursday, the most up to date figures, while 4,196 were detected in Scotland, 338 in Wales and 791 in Northern Ireland.

However, experts warn the daily figures are now almost meaningless because they rely entirely on people coming forward for tests. MPs have called for the end of the constant updates.

And there were 1,958 admissions across the UK on Sunday, down 13.9 per cent from the 2,274 people who sought NHS care seven days earlier.

Some 19,028 infected patients were in hospital beds yesterday morning, down from 20,498 a week ago.

Official figures suggest around half of the tally are so-called incidental admissions, meaning they are primarily in hospital for another reason.

Daily deaths continued to creep upwards, with an average of 283 per day logged in the last week. 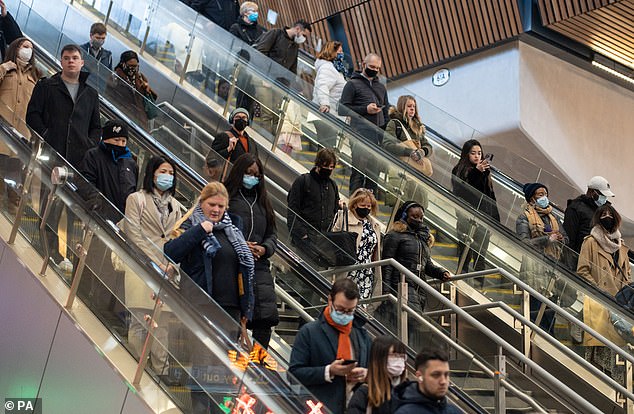 Just two days a week in the office for civil servants: Our investigation reveals thousands of mandarins are allowed to WFH indefinitely

Tens of thousands of civil servants are being allowed to carry on working from home indefinitely.

Despite being urged by ministers to get back to the office for the sake of the economy, mandarins have quietly instituted permanent ‘hybrid working’.

A Daily Mail investigation found that staff are required to spend as little as 40 per cent of their working week in the office.

Public sector offices around the country are still virtually empty, with only a handful of employees clocking in – months after lockdown restrictions were axed.

The Mail’s audit found that on a typical Monday in the middle of March, many publicly-funded bodies had less than 10 per cent of their staff in work. Some had under 5 per cent – and one had none at all.

But the figure encompasses all people dying ‘with’ the virus rather than just those whose death was caused by it. This means large numbers could be so-called ‘incidentals’ due to the virus’s high prevalence.

It comes as the ONS survey suggests virus prevalence fell in Scotland and Northern Ireland, as well as in England, and flattened off in Wales, in a sign that the outbreak is peaking across the UK.

Broken down, rates are falling or flattening in every region of England – except the North East where they are still rising.

The percentage of people testing positive has decreased in all age groups except those in school Year 7 to school Year 11 and those aged 70 years and over, for which the trend was uncertain.

For Wales, rates have generally increased for those aged around 40 years and over while the trend is uncertain among younger adults and children.

In Northern Ireland, they have been falling in recent weeks for younger adults and children, while the trend is uncertain for older adults. In Scotland, rates have generally decreased among all ages in recent weeks.

The NHS Confederation warned earlier this week that messaging encouraging masks in crowded places and limits on meeting others indoors were needed to fight the virus, claiming this Easter would be ‘as bad as any winter’ for hospitals.

Its renewed calls for onerous public health measures were based on high levels of Covid admissions in hospitals – although these are also now falling without any non-pharmaceutical interventions.

UK-wide Covid hospital admissions appear to be falling, too. Government dashboard data shows the daily figure fell for the fourth day in a row on Saturday, the most recent date with data.