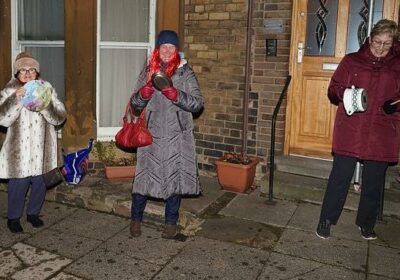 Covid’s made us love our noisy neighbours! Relations with people living next door are now better now than before the pandemic, study finds

The coronavirus pandemic has encouraged Britons to get on with their neighbours again, a study has claimed.

Many believe that modern lifestyles and growing populations have eroded Britain’s community spirit.

But University College London researchers say the shared experience of the pandemic has brought the country closer together.

In their survey of 70,000 Britons from across the country, they found feelings of unity and sense of community had risen by up to three times in the last year.

Experts said the return to neighbourly values could be in part be attributed to people spending more time at home during lockdowns.

Some 32 per cent of surveyed Britons they felt an increased sense of ‘shared values’ with their neighbours – up from nine per cent in July last year.

A quarter said they felt greater ‘trust’ in the person next door, and felt more united with them, compared to just seven and nine per cent last year.

And some 35 per cent of respondents said they felt greater neighbourhood support, compared to 28 per cent last year. 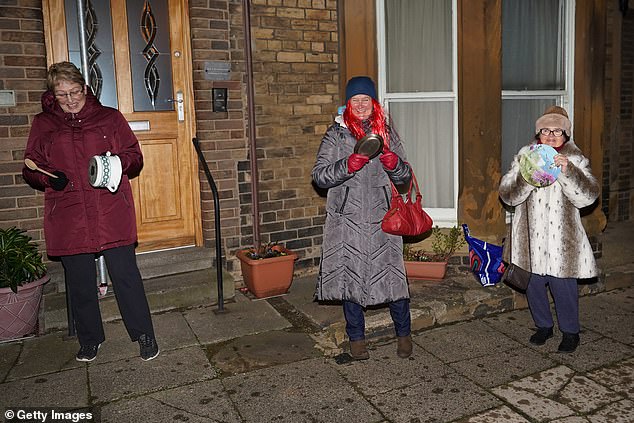 Covid has encouraged Brits to get to know their neighbours and improved community spirit, a study has claimed. Pictured: Residents of a street in Saltburn, north Yorkshire, clap for carers in January 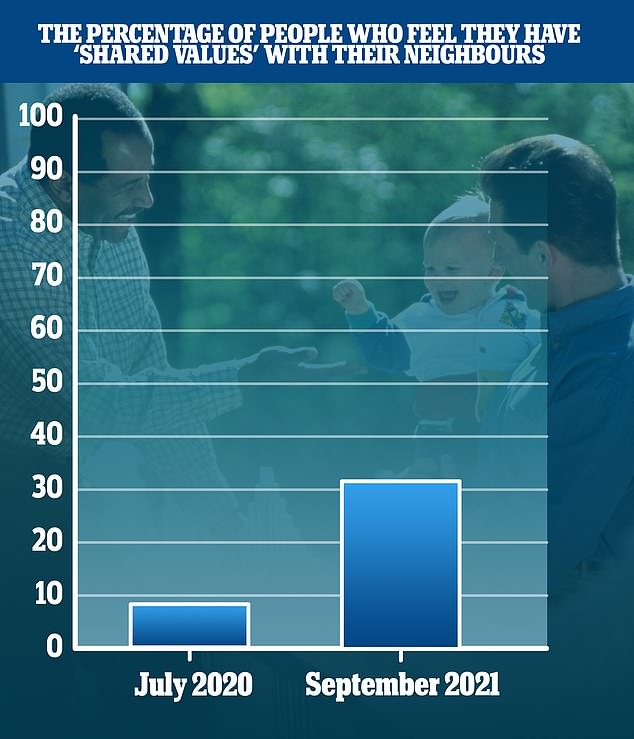 Some 32 per cent of survey respondents said they felt an increased sense of ‘shared values’ this September, compared to just nine per cent in July last year

People were restricted from socialising and ordered to stay at home unless necessary during England’s three national lockdowns.

But neighbours helped each other with groceries and met on their doorsteps to  ‘clap for the NHS’  in the first lockdown.

UCL’s Covid-19 Social Study has surveyed more than 70,000 since the start of the pandemic. The latest results were based on answers in September.

Dr Elise Paul, lead author and epidemiologist at UCL, said: ‘Our report shows there have been positive improvements in the way we feel about our neighbours, when compared to before the pandemic.

‘Interestingly, the longer the pandemic has gone on appears to have solidified this trend, with more people feeling greater levels of trust, shared values and cohesion with those who live closest to us.

‘Perhaps this boost in neighbourly relations is no surprise.

‘Many of us have spent significantly more time at home during the pandemic and it is likely we have spent more time with and got to know our neighbours far better than before.’

She continued: ‘In addition, there is likely to be an empathy and togetherness borne through the shared experience of the past year and a half.

‘That said, some people now experience worsening of neighbourhood relations.

‘Much has changed over the last 18 months, with limits to our freedom, how we interact with others and changes to how we shop and travel.

‘Perhaps these restrictions have caused some to feel less satisfied with life in their community.’

Britons looked out for the vulnerable during lockdown

Britain’s first lockdown led to a surge in neighbourliness as people look out for the vulnerable and talk to those next door more than ever before.

Following the Government’s instruction in March 2020 to stay at home, many neighbours became good friends, according to a report by Co-op Insurance.

A survey of more than 2,100 adults this April found that three out of four knew which of their neighbours were classed as high risk and over a quarter checked in on neighbours in the last few weeks.

Over a fifth of UK adults who know at least some of their neighbours said they spoke to them more than they did previously.

Around one in six said their relationship had become better.

Many people said they had chatted over the fence or phone to neighbours and more than one in 10 dropped off shopping or essential medicine.