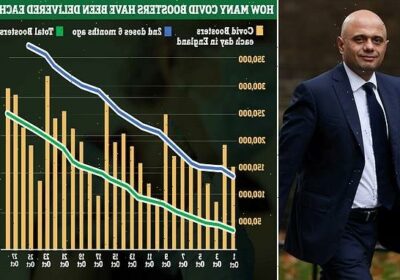 Health chiefs today cut the wait between Covid booster vaccines to as little as four months for some vulnerable immunocompromised patients.

The UK Health Security Agency, which took over from the now-defunct PHE, updated its guidance to allow people set to receive treatment that will lower their immune system to cut their waiting time for a booster by two months.

Waiting times will only be cut to four months to allow those set to receive the treatments — including chemotherapy — to get a booster first, while waiting times will remain the same for most people.

Care home residents who received their second doses at different times will also be allowed to be vaccinated in the same session under the guidance, as long as it’s been five months since their second dose.

Other vulnerable groups including housebound patients will also be allowed to receive their booster and flu jabs at the same time.

More than 1.6million people who are newly eligible for a coronavirus booster vaccine will be invited to come forward next week.

Around 9.5million booster invites have been sent to people in England so far, and more than six million jabs have been delivered in the first six weeks of the rollout, according to NHS England.

More than half of eligible people aged over 50 and over two thirds of people over 80 have received the third dose, the service said.

Eligible people include adults over 50, those living in care homes, frontline health and social care workers, adults with underlying health conditions which make them more vulnerable to coronavirus, and those they live with. 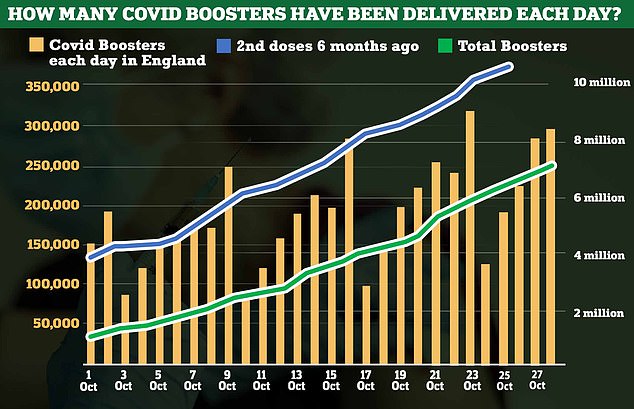 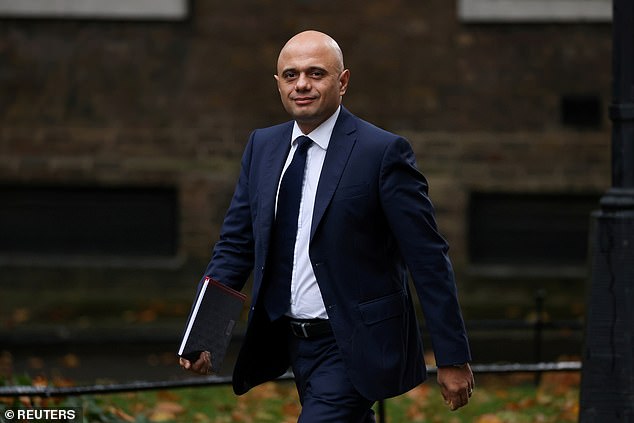 England’s Covid vaccine drive for children is going even slower than thought, according to official data that has prompted calls for the NHS to speed up the roll out over fears it could leave No10 with no option but to resort to Plan B.

Just 19.3 per cent of 12 to 15 year olds have come forward for their first jab, figures on the Government dashboard show, despite the whole group being eligible since September 20.

The children’s roll out has been beset by delays and cancellations, while critics complained the decision to only let youngsters get jabbed in schools hampered the drive. Uptake rates were always expected to be lower in children — who face a tiny risk from Covid and a higher risk of complications from the jab.

NHS England insisted today all children had already been invited for their first jab and repeated that they can now book online, after leaked Whitehall documents claimed half the age group is still yet to get a jab offer.

Former Health Secretary Jeremy Hunt yesterday urged ministers to ‘turbo-charge’ the roll out to avoid another rebound in Covid cases which could force ministers to impose Plan B — bringing back face masks and work from home guidance.

It comes after the US moved a step closer to jabbing children as young as five this week, which prompted experts to immediately urge Britain not to ‘blindly’ follow suit.

The UKHSA said the new flexibility will protect the most vulnerable more quickly.

Health and Social Care Secretary Sajid Javid said: ‘We are making great progress with the booster rollout and I want to thank everyone working so hard to get jabs in arms.

‘This updated guidance will ensure healthcare professionals have the necessary flexibility in the booster programme, allowing more vulnerable people to be vaccinated where it makes operational sense to do so — including our loved ones in care homes.’

The update comes as the UK recorded more than seven million booster jabs, after a record breaking week of more than two million being administered in the last seven days alone.

Vaccines Minister Maggie Throup said: ‘Covid-19 booster vaccinations are extremely important in keeping people and their loved ones safe this winter, and this updated guidance will ensure the programme can adapt to best protect certain groups.

‘I encourage everyone eligible for their jab to book theirs as soon as possible and secure this protection.’

Deputy lead of the NHS vaccination programme, Dr Nikki Kanani, said the figures are ‘encouraging’ and advised anyone who receives an invite to take up the offer.

Dr Kanani said: ‘It is encouraging to see that thanks to the efforts of NHS staff, millions of people have received their booster already and just over six weeks in, with over half of eligible over 50s already protected as we head into winter like no other.

‘I’ve recently had my booster at a local pharmacy and with more people becoming eligible every day I would encourage anyone who receives their text or letter invite to book an appointment and get their potentially life-saving top-up jab as soon as they can.

‘The vaccine is simple, quick and effective and will help us to give the country maximum protection from the virus.’

Overall, more than 86 million coronavirus doses have been delivered and nine in 10 adults have had their first dose since the rollout began in December 2020.

People who are eligible for boosters will be invited for the shot at least six months after their second dose, so the number of eligible people changes daily.

Text invites will come from ‘NHSvaccine’ and will include a link to the NHS website, guiding people to their nearest vaccine site.