COVID-19 cases are surging in almost every US state 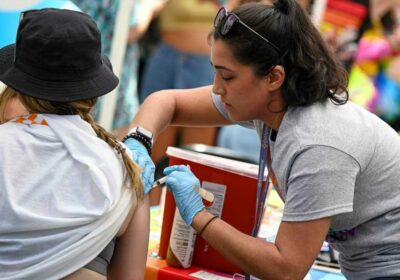 In Sri Lanka, a dangerous climb for online school

The number of daily new COVID-19 infections has shot up almost 50 percent in the United States amid the spread of the highly contagious Delta variant — with rises even recorded in states with high vaccination rates, data shows.

The US on Tuesday recorded an average of 19,455 new cases per day over the last seven days — up 47.5 percent from the previous week, according to a USA Today analysis of data from Johns Hopkins University.

Forty-three states have seen an increase in infections from the previous week.

Over the past two weeks, cases have also been rising in some states with high vaccination rates, such as New York, Vermont, and California — all of which have fully vaccinated at least 62 percent of their adult residents, according to data.

Dr. Jennifer Nuzzo, with the Johns Hopkins Center for Health Security, said the spread in highly vaccinated states is “worrisome.”

“Anywhere there are pockets of low vax coverage is at risk!” she wrote on Twitter.

Several states, including Arkansas, Florida, Iowa, Missouri and Oklahoma, have recorded double the number of new infections compared to a month ago, NPR reported.

“Unfortunately looking at what’s happening in individual states, I do worry we will continue to see national numbers increase,” Nuzzo told the outlet.

The troubling numbers come as highly contagious variants, such as the Delta strain, spread across the US.

“The emergence of the delta variant is going to mean for those areas with low rates of vaccination that they’re very much at risk to see significant increases in transmission, with potentially even exponential growth,” Dr. David Rubin, director of PolicyLab at Children’s Hospital of Philadelphia, told NPR.